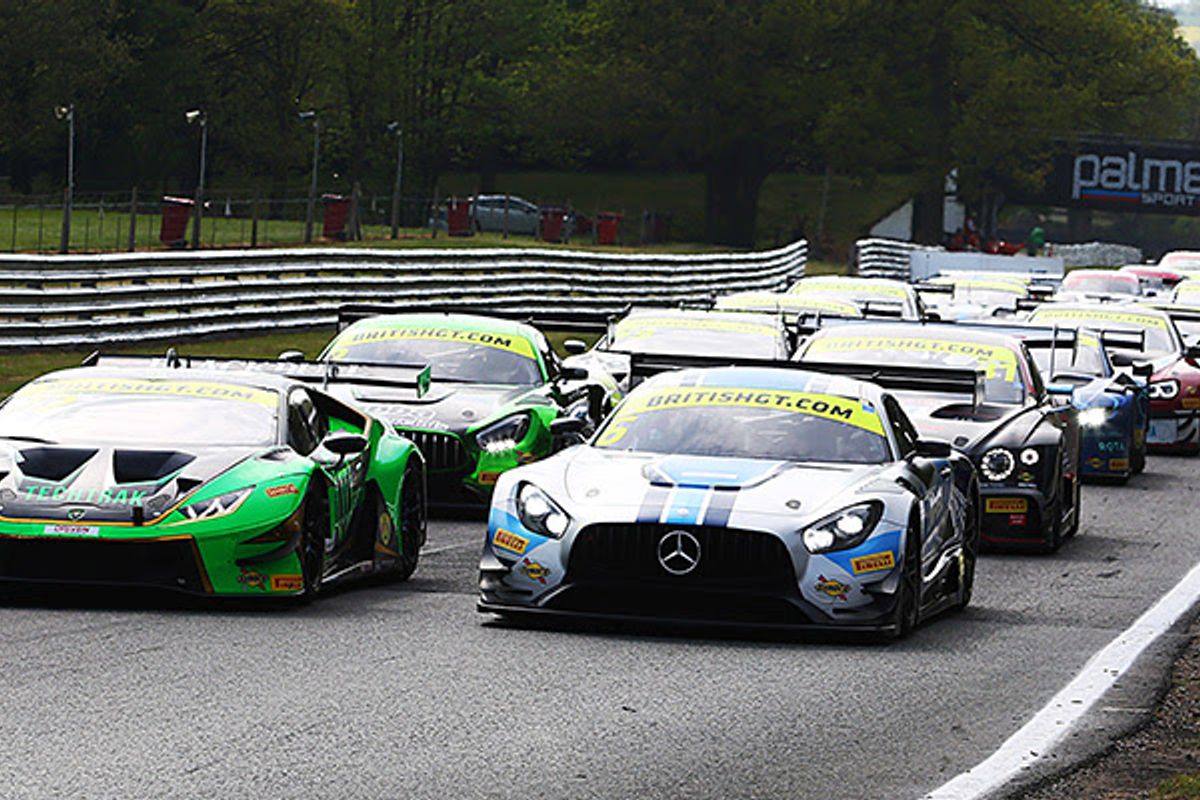 A new season of British GT continues this weekend at Snetterton where 36 cars will tackle another two 60-minute sprint races.

Oulton Park’s 2019 curtain raiser produced a mix of first-time and repeat winners, while glorious sunshine and a strong supercar entry resulted in one of the championship’s best-ever attended events. Both are hopefully assured again this weekend when 13 GT3s and a record 23 GT4s descend on Norfolk.

GT3: ALL EYES ON BARWELL

Barwell Motorsport’s Lamborghinis always win at Oulton. Five victories in the last four seasons attest to that. So it’s no surprise to see its drivers lying first and second in this year’s championship after the opening round.

The problem, for its rivals at least, is that Barwell’s Lamborghinis aren’t too shabby around Snetterton either!

Sam De Haan and Jonny Cocker’s breakthrough victory at Oulton sees them lead team-mates Adam Balon and Phil Keen by seven points at this early stage. However, that win also ensures a 10s Pitstop Success Penalty must be served during the first of Sunday’s races, while the second Huracan – which, in Keen, features Snetterton’s most successful-ever British GT3 driver – competes handicap-free. Cocker, by comparison, has only won once at Snetterton, which came all the way back in 2007.

It’s not often that TF Sport has a bad day. But that’s exactly what happened at Oulton where the reigning Teams’ champion’s two new Aston Martins mustered just eight points between them.

At least Snetterton provides two more opportunities to bounce back. And having won the last three races there, albeit with the old V12 Vantage, TF Sport couldn’t have picked a better venue at which to reset. One of Adam’s three Snetterton victories was achieved with TF Sport, while Mark Farmer and Nicki Thiim claimed two poles and a win there 12 months ago.

2017 champions Rick Parfitt Jnr and Seb Morris rekindled their bromance after a year apart by winning Race 1 at Oulton, and head to Snetterton without a Pitstop Success Penalty. The JRM Bentley duo are 10 points behind De Haan and Cocker but, as Morris pointed out post-Oulton, have a higher total and smaller deficit than at the same stage of their title-winning season.

Ollie Wilkinson and Bradley Ellis were the best of Aston Martin’s contingent at Oulton where Optimum Motorsport’s Silver Cup crew became the first to score an outright podium with the new V8 Vantage. Separate qualifying sessions should theoretically give one of its drivers an edge in Q1 when they go up against a predominantly Am entry, while no Pitstop Success Penalty also marks them out as contenders. And, if you like omens, try this one for size: Ellis scored his last overall and class British GT victories at Snetterton in 2008 and ’14, respectively.

ABBA Racing, Richard Neary and Adam Christodoulou head to Snetterton buoyed by a maiden British GT podium, while both Century BMWs were also in the mix at Oulton Park. Indeed, Dominic Paul and Ben Green’s sheer consistency means they’re in a group of five crews from second to sixth covered by 10 points.

They’re joined by a new GT3 entry this weekend in the form of WPI Motorsport’s Lamborghini Huracan GT3 EVO, which replaces the GTC-spec Porsche Michael Igoe and Adam Wilcox drove at Oulton.

Elsewhere, injuries sustained by Ian Loggie in a cycling accident have ruled out RAM Racing’s Mercedes-AMG, while G-Cat’s debut has again been postponed due to delays outside of the team’s control. It’s hoped both will be in action at Silverstone.

Consistency vs one hit wonders: that’s the scenario atop the GT4 Drivers’ Championship where five crews are separated by just four points following an unpredictable season opener at Oulton. And providing any sort of form guide is made even more difficult by the fact none of this weekend’s 46 drivers has ever won a British GT race Snetterton.

HHC’s Dean Macdonald and Callum Pointon plus Multimatic duo Seb Priaulx and Scott Maxwell currently lead the way by dint of one win apiece. However, their failure to score in the second and first races, respectively, has kept the chasing pack hot on their heels.

It’s advantage McLaren in the first of Sunday’s contests when Macdonald and Pointon compete Pitstop Success Penalty-free, unlike their Ford rivals. A 570S has also won on each of British GT’s three previous visits to Snetterton, while the current-generation Mustang makes its debut there this weekend.

Two points further back are Invictus Games Racing’s Steve McCulley and Matthew George who secured Jaguar’s first British GT podium for 22 years at Oulton. David Appleby Engineering has transformed the F-TYPE SVR over the winter into a car capable of mixing it with GT4’s established order, while its drivers also top the early Pro/Am standings. McCulley makes way for Paul Vice this weekend as part of the project’s ongoing remit to rehabilitate injured ex-service personnel.

Balfe Motorsport’s McLaren also picked up a Success Penalty for finishing second at Oulton. However, its drivers – Graham Johnson and Michael O’Brien – won’t complain too much after ending the weekend three points shy of top spot despite qualifying 21st and 13th in class!

Aston Martin once again has the numerical advantage thanks to its seven GT4 entries. However, its strength in numbers failed to materialise at Oulton where two fifth place finishes, courtesy of TF Sport and Beechdean AMR, were the best its new V8 Vantage could muster. In truth, only a late incident denied Kelvin Fletcher and Martin Plowman a podium in Race 2, although that misfortune at least comes with the bonus of racing Pitstop Success Penalty-free in Snetterton’s opener.

The same goes for reigning Teams’ and Drivers’ champions Century Motorsport who failed to score a point at Oulton. They now head to Snetterton where the BMW M4 claimed its first-ever British GT victory last season.

British GT4 records will also be broken this weekend subject to all 23 entries and nine manufacturers contesting Race 1. Both are one more than the existing records, which were established in 2018.

Equally, a selection of support races will be streamed live on britishgt.com/live throughout the day. It’s also the place where international fans can watch restriction-free coverage.