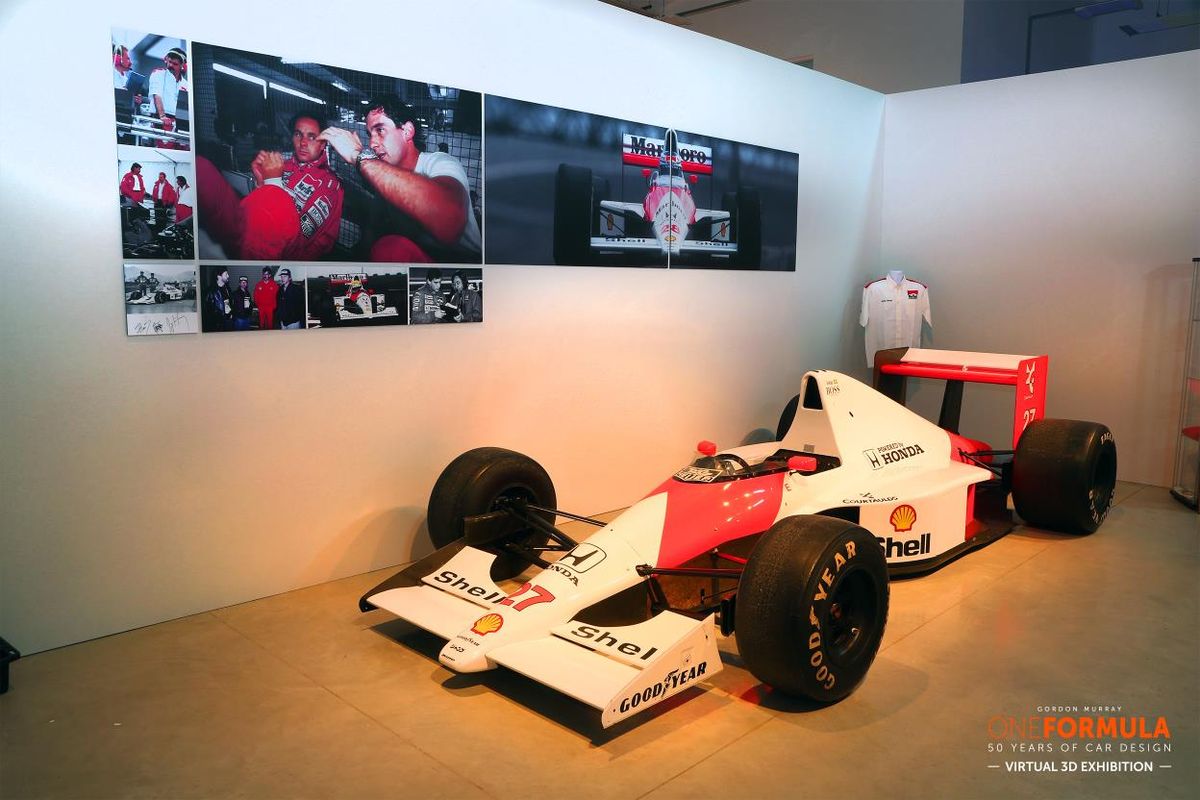 50 years of automotive design and engineering immortalised in online showcase
Fans can ‘sit’ in Senna’s Formula One car; examine detail of a McLaren F1
Free exhibit goes live in tandem with Murray’s One Formula book launch

Gordon Murray has unveiled a fully-immersive, internet-based virtual exhibition of 40 different iconic race and road cars produced during the past 50 years of his illustrious career in vehicle design and engineering. The online exhibition, which brings to life the private ‘One Formula’ exhibition held in late 2017, is free to access and can be found at www.oneformulagordonmurray.com.

Motorsport fans can ‘walk’ among cars driven by legends including Piquet, Senna and Prost, and even ‘sit’ in the cockpits for a driver’s-eye view. Among the grand prix cars featured are the Brabham BT46B ‘Fan Car’, the BT49C that won the 1981 World Drivers’ Championship in the hands of Nelson Piquet, and the McLaren MP4/4, which Ayrton Senna drove to his first Drivers’ Championship victory in 1988.

Professor Gordon Murray, CBE, said: “It is such thrill to share my passion for engineering purity, beautiful design, aerodynamic excellence, and technological innovation. Creating an exhibition in a free-to-view format, accessible to all, in stunning virtual reality is exciting and a source of great pride.

“For the One Formula exhibition, we gathered almost every race and road car from my 50-year career to date, and we were inundated with requests from fans across the world who wanted to visit. Being a short-term, private exhibition meant we couldn’t share our passion with these enthusiasts. So, doing so in virtual form is the next best thing!”

The launch of the free virtual exhibition coincides with the launch of Murray’s ‘One Formula’ book, a two-volume, 900-page epic that charts in detail the ideas, personal perspectives, triumphs and records achieved over 50 years of automotive design and engineering.

Those who explore every corner of the detailed and fascinating online showcase will see information and exhibits covering the design, engineering, prototyping and development of vehicles by Gordon Murray Design Limited. By scrutinising the principles Murray has applied across his career, visitors may piece-together the blueprint for a forthcoming supercar – which is currently under top secret development.

Professor Gordon Murray, CBE – biography
Gordon Murray was born in Durban, South Africa in 1946 and gained a Mechanical Engineering Diploma from Natal Technical College. He designed, built and raced his own sports car (the IGM Ford) in the National Class in South Africa during 1967 and 1968.

In 1969 Gordon moved to the UK and joined the Brabham Formula One Team as Technical Director, winning two world championships (1981 and 1983) during his 17 years with the team. Gordon joined McLaren Racing as Technical Director in 1988 and three consecutive championship wins (1988, 1989 and 1990) followed. In 1990, Gordon moved away from Formula One – after 50 Grand Prix wins – to concentrate on establishing a new company for the group, McLaren Cars Limited.

The company’s first project, the F1 road car, is still regarded as one of the world’s best engineered cars. A racing version won two world sports car championships and the Le Mans 24-hour race on its first attempt in 1995. McLaren Cars then completed several other successful projects culminating in the Mercedes-Benz SLR McLaren programme.

Gordon left McLaren in 2005 to set up his new company Gordon Murray Design Limited (in 2007), of which he is CEO and Technical Director. The innovative British company operates from Shalford in Surrey, and aims to be the world leader in automotive design. It reverses the current industry trend for sub-contracting by having a complete in-house capability for design, prototyping and development.

In May 2019, Professor Murray was made a Commander of the British Empire (CBE) by the Duke of Cambridge, Prince William. The ceremony, held at Buckingham Palace, recognised the contributions made by Murray to the motorsport and automotive sectors over the past 50 years.