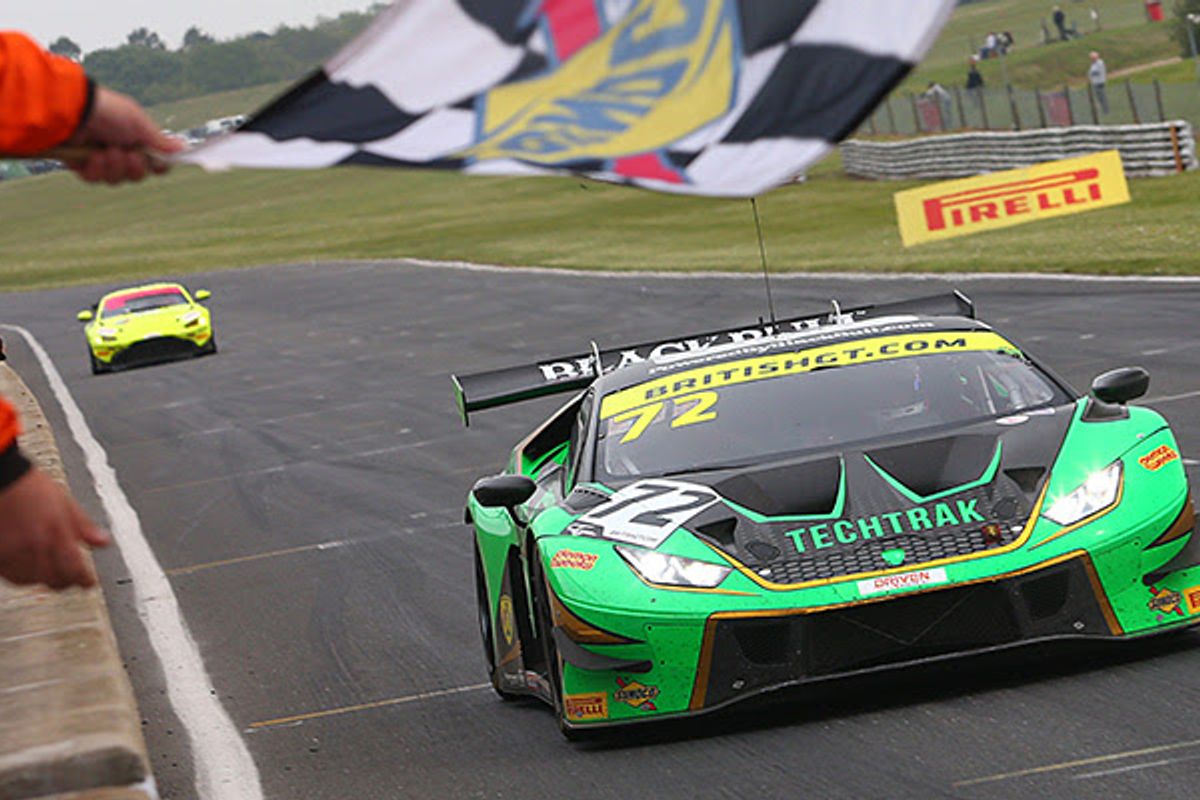 Second place overall went to Team Parker Racing’s Glynn Geddie and Ryan Ratcliffe, who held off a train of three cars over the closing laps. They included TF Sport’s #47 Aston Martin shared by Graham Davidson and Jonny Adam, which emerged from a frenetic final lap in third.

Barwell’s victory owed much to Adam Balon sticking with the three Silver Cup cars ahead during an action-packed opening stint that featured several incidents, which put Phil Keen in prime position to strike after the pitstops.

Tom Gamble initially converted pole position into an early lead, but it only lasted a handful of corners before the Century BMW was nudged by Sam De Haan approaching Wilson. That allowed Glynn Geddie – who started fourth – to nip down the inside of both of them on the exit.

Gamble recovered to slot into second ahead of Optimum’s Ollie Wilkinson who also took advantage of the lap one shenanigans to demote De Haan to fourth. That became eighth several laps later when Dominic Paul’s attempted move at Wilson sent Barwell’s #69 Lamborghini spinning.

Back at the front, Geddie was able to build a seven-second gap over Gamble, while Wilkinson resisted increasing pressure from Balon who’d taken advantage of De Haan and then Paul’s spins.

Thus Team Parker’s Bentley should have emerged from its driver change with a healthy lead. However, a slow stop handed the lead to Gamble’s co-driver Jack Mitchell who re-joined just ahead of the charging Keen. The heavier Silver Cup-entered BMW should have been an easy target for Keen, but Mitchell defended valiantly before an electrical glitch suddenly slowed the M6.

Keen duly pulled away to a comfortable 13.5s victory while, behind, Ratcliffe picked up two places at the expense of Mitchell and Wilkinson’s Optimum co-driver Bradley Ellis, who was hit with a one-second stop/go penalty for a short pitstop.

However, Ratcliffe’s mirrors were soon full of Rob Bell, Jonny Adam, Seb Morris and Jonny Cocker who all closed in on the Silver Cup-entered Bentley as the race ticked towards its conclusion. Bell’s Balfe McLaren was sidelined by a puncture which then allowed Adam to make repeated attempts at pressuring the Welshman into a mistake. His efforts eventually left the door ajar for Morris to slip through, but when The JRM Bentley then spied an opportunity to pinch second on the final lap Morris was caught out by a GT4 car.

The subsequent contact allowed both Adam and Cocker to pass the Bentley. The duo then ran side-by-side to the chequered flag, TF Sport’s Aston ultimately prevailing by just 0.082s.

Marco Sorensen and Andrew Howard completed the top-10 for Beechdean AMR after the latter spun on fluid dropped by Richard Neary’s damaged Mercedes-AMG. Both cars picked up three-place grid penalties for Race 2 by overtaking under yellow flags and causing an avoidable collision, respectively.

Williams played his part by passing Multimatic’s pole-sitter Scott Maxwell at the start and controlling the pace thereafter. The Mustang’s 24s additional pitstop time – 10s for winning at Oulton and another 14 as a Silver Cup entry – ensured Fielding cruised to an easy victory.

Multimatic’s longer pitstop compared to the other Silver Cup crews ensured it emerged well down the order following the driver changes. Instead, James Dorlin picked up where Smith had left off to slot into a comfortable second place ahead of Michael Broadhurst whose Fox Motorsport co-driver Mark Murfitt pitted as the best-placed midfield Am. That performance was magnified after the Silvers served their additional pitstop time.

Luke Williams and Tom Jackson completed the top-six ahead of Balfe duo Graham Johnson and Michael O’Brien who once again made progress during the second stint. Century’s #42 BMW slipped to eighth after pitting in fifth.