Barwell's Balon and Keen double up at Snetterton GT 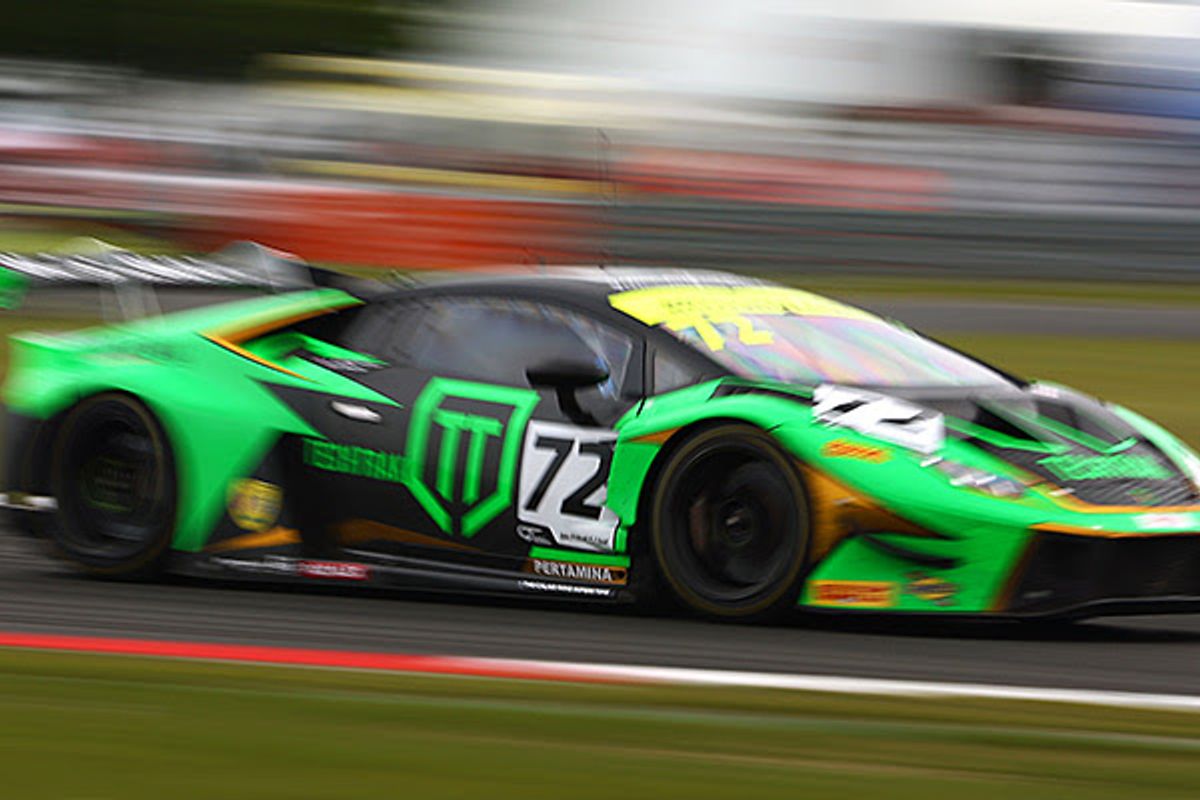 Adam Balon led team-mate Sam De Haan to a Barwell Motorsport one-two in British GT’s second race at Snetterton on  Sunday. The #72 Lamborghini overcame a 10s Pitstop Success Penalty en route to its second win in just over four hours, while Keen’s back-to-back wins saw him become the championship’s most successful driver in terms of class and GT3 victories.

There was further silverware for McLaren in the GT4 class where Team Parker’s late retirement handed victory to Tolman Motorsport’s #5 570S shared by Jordan Collard and Lewis Proctor. They beat TF Sport’s Ash Hand and Tom Canning while HHC’s McLaren shared by Callum Pointon and Dean Macdonald rebounded from a penalty to complete the podium.

British GT’s Pitstop Success Penalties ensure back-to-back victories are a rare occurrence. Barwell were the last to achieve it at Oulton Park in 2017 and overcame a similar 10s handicap in Race 2 thanks to a true team performance.

Phil Keen qualified just 0.055s behind pole-sitter Nicki Thiim, and the pair were once again the class of a stacked Pro field during the opening stint. Rarely more than a second apart, TF Sport’s Aston Martin and the #72 Lamborghini pitted nose-to-tail as the 10-minute pit window ticked towards its conclusion.

The two Lamborghinis then worked in tandem to bridge Farmer’s advantage, the intermittent light drizzle seemingly favouring both Huracans, and it wasn’t long before both had caught and passed the Aston Martin.

Balon and De Haan continued to track each other thereafter as the gap between them opened and closed through the traffic. The latter was never quite in position to challenge, though, and took the chequered flag just 0.5s shy of victory.

Behind, Balfe Motorsport made amends for the contact that ended its Race 1 hopes by completing the podium. Rob Bell ran fifth during the opening stint as part of a four-car train that also featured Century’s Ben Green, Team ABBA’s Adam Christodoulou, TF Sport’s Jonny Adam and Optimum’s Bradley Ellis. His co-driver Shaun Balfe emerged in the same position before hunting down Farmer over the closing stages having benefitted from JRM’s Bentley sliding off while sizing up the Aston.

Thus TF Sport’s #2 Aston Martin led home the sister V8 Vantage shared by Graham Davidson and Adam who were delayed by their five-second Success Penalty, while Richard Neary and Christodoulou had a quiet run to sixth.

Balon’s two victories saw him crowned Blancpain’s Driver of the Weekend, while Phil Keen set the Sunoco Fastest Lap. However, he also made history by moving to 17 British GT victories in all classes: two more than John Greasley, Thorkild Thyrring and Tim Mullen. His new total of 15 GT3 and Overall wins is also one more than former record-holder Jonny Adam.

Incredibly, it was also Keen and Barwell’s second double at Snetterton after achieving the same feat along with Jon Minshaw in 2016.

Team Parker’s #66 Mercedes-AMG was just two laps away from a dominant victory at Snetterton before another late issue – as at Oulton Park – robbed Nick Jones and Scott Malvern. Instead, Tolman Motorsport’s Lewis Proctor and Jordan Collard picked up the pieces to claim their maiden British GT4 victories when several more front-runners hit trouble.

But the star of the show was undoubtedly Malvern who converted pole position into a 14s lead before the pit window opened having also set a new British GT4 lap record of 1m58.125s. The Pro/Am crew’s advantage grew further after the stops thanks to the chasing Silver Cup runners serving an additional 14s.

Indeed, Jones was 17s ahead of Callum Pointon when the HHC McLaren he shares with Dean Macdonald was pinged for a short pitstop. Balfe’s Graham Johnson was initially the chief beneficiary after his co-driver Michael O’Brien pitted from fourth. But their hopes were also dashed by a 10s stop/go penalty for causing avoidable contact.

Jones therefore began the penultimate lap with a 30s lead over Proctor, who had passed Ash Hand earlier in the second stint. But bad luck struck once again when a puncture – picked up when he was forced wide by a GT3 car – cost Team Parker certain victory.

Proctor and Collard, who completed the opening stint in fifth, thus claimed victory from TF Sport’s Hand and Canning who lost second to Dean Macdonald during the opening stint. Their positions were reversed at the finish due to HHC’s penalty, although issues for Team Parker and Balfe saw the #57 McLaren still finish on the podium.

HHC’s other 570S finished fourth courtesy of Luke Williams and Tom Jackson who were also part of a tight scrap for the top-six before the pit window opened.

Race 1 winners Richard Williams and Sennan Fielding should have claimed Pro/Am honours in fifth. However, their Steller Performance Audi was subsequently disqualified for a technical infringement. That promoted Multimatic’s Seb Priaulx and Scott Maxwell, while Beechdean AMR’s Kelvin Fletcher and Martin Plowman took the Pro/Am spoils in sixth overall.

The Aston Martin finished ahead of class rivals Mark Murfitt and Michael Broadhurst (Fox Motorsport), the RACE Performance Mustang shared by Sam Smelt and Aron Taylor-Smith, and Tolman’s second McLaren which would have been a top-three contender without its own penalty for a pitstop infringement.

Elsewhere, Track Focused’s KTM will serve a five-place grid penalty at the next round for causing an avoidable collision.

Eurosport has highlights of both races on Saturday 25 May at 10:00 and 13:30. Today’s British GT action can also be watched again as-live on the championship’s Facebook page and website.

2019 continues with the Silverstone 500 – British GT’s blue riband event and first endurance race of the season – on June 8/9.