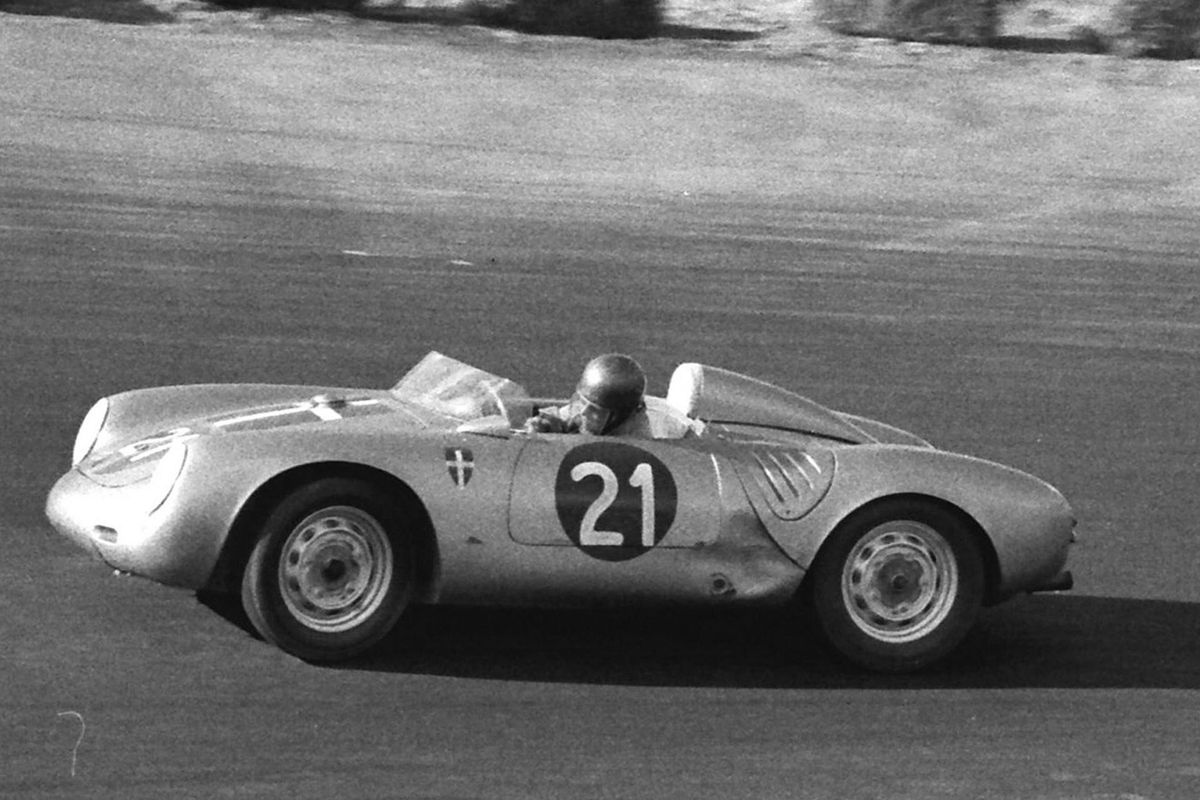 The 15th of 40 examples built; the only example sold new to Denmark
Fascinating early competition history in Denmark and East Africa
Documented provenance, including single Italian ownership for 31 years
Comprehensive four-year restoration completed in 2016
Eligible for a multitude of vintage racing and concours events worldwide

They Say: The 550A Spyder was Porsche’s first purpose-built competition model, introducing a new lightweight spaceframe chassis, fully independent suspension, a five-speed gearbox, and revised coachwork. The 550A differed from its predecessor in a number of particulars. Most notably, the ladder-type frame was replaced by a steel-tube spaceframe which was both stiffer and lighter, with a weight savings of 16 kg (35.3 lbs.). The weight of the complete body was reduced by no less than 27 kg, care to the fact that the new frame provided higher mounting points that allowed for many of the body reinforcements to be eliminated. Torsional stiffness of the frame was tripled, and the overall stiffness was five times that of the previous type ladder frame. Overall, the 550A hardly weighed 530 kg (1,168 lbs.), excluding fuel, but including the compulsory spare wheel.

The rear suspension was changed from a normal swing axle to a low pivot swing axle, while a front anti-roll bar was added. These modifications considerably improved the car's handling. The 550A was equipped with dual-circuit brakes while power from the basically unmodified engine was increased to 135 bhp at 7,200 rpm with the compression ratio raised from 9.5 to 9.8.1. The Solex carburetors were also replaced by Weber 40 DCM twin-choke downdraft carburetors.

Chassis number 0121 is the 15th car built, and benefits from a well-documented life, including fascinating period racing history and a recent four-year restoration. After finishing assembly in late March 1957, the 550A was sold to Danish racing patron Preben Andersen (principal of the Scuderia Palan) as the only example earmarked for Denmark.

With Denmark’s flag painted across the hood, the Porsche was piloted by local racing legend Julius Voigt-Nielsen, and he triumphed in his first outing at the Roskilde Ring in late April. He earned two more victories in June and August, and two 3rd-place finishes to end the season.

In late 1958, the 550A was sold to John Manussis, a British racing driver residing in Kenya who won the East African Safari Rally several times, often employing Lucille Cardwell as his navigator. Following an unrelated accident that left Manussis unable to drive, Cardwell took the wheel alone and she twice roared to victory at the Nakuru Park Motor Circuit in December 1961.

By early 1962, the Porsche passed into the possession of Mrs. Cardwell and her husband, William J. Cardwell, and they continued to campaign the car from their home in Tanzania. Later in the decade, the spyder was sold to Gordon Crow, a dealer in Nairobi, and he repainted the car blue and entered numerous local events. During his ownership, the 550A was seen in 1969 by Porsche engineer and soon to be factory driver, Jürgen Barth.

In 1978, the Porsche was acquired by Italian collector, a Brescia resident, Giuseppe Freschi. He retained possession for 31 years while entering the spyder in the Mille Miglia several times, driving the event as recently as 2010.

In 2011, the 550A was acquired by Pierre Asso of France, but he only briefly kept the car before selling it to its current custodian, who was impressed by the spyder’s originality and completeness. In 2012, the consignor commissioned a specialist to conduct a comprehensive four-year restoration, and every attempt was made to utilize correct factory tools and techniques where necessary. Completed in 2016, the impressive refurbishment returned the car to its original factory appearance in every detail. Following a post-restoration inspection, Jürgen Barth declared, “550A-0121 is perfect in its original form, and all technical aspects are like it was in 1957.”

Having accrued just 100 kilometers since restoration, this breathtaking Porsche is ideal for participation in significant touring events like the Mille Miglia or the Le Mans Classic. It benefits from a well-documented ownership chain that is recounted in two private reports by highly regarded Porsche experts Jürgen Barth and Andrew Hosking. Equally poised for the concours field, the beautifully presented spyder would make a crowning addition to most any sporting collection, beckoning Stuttgart enthusiasts worldwide.