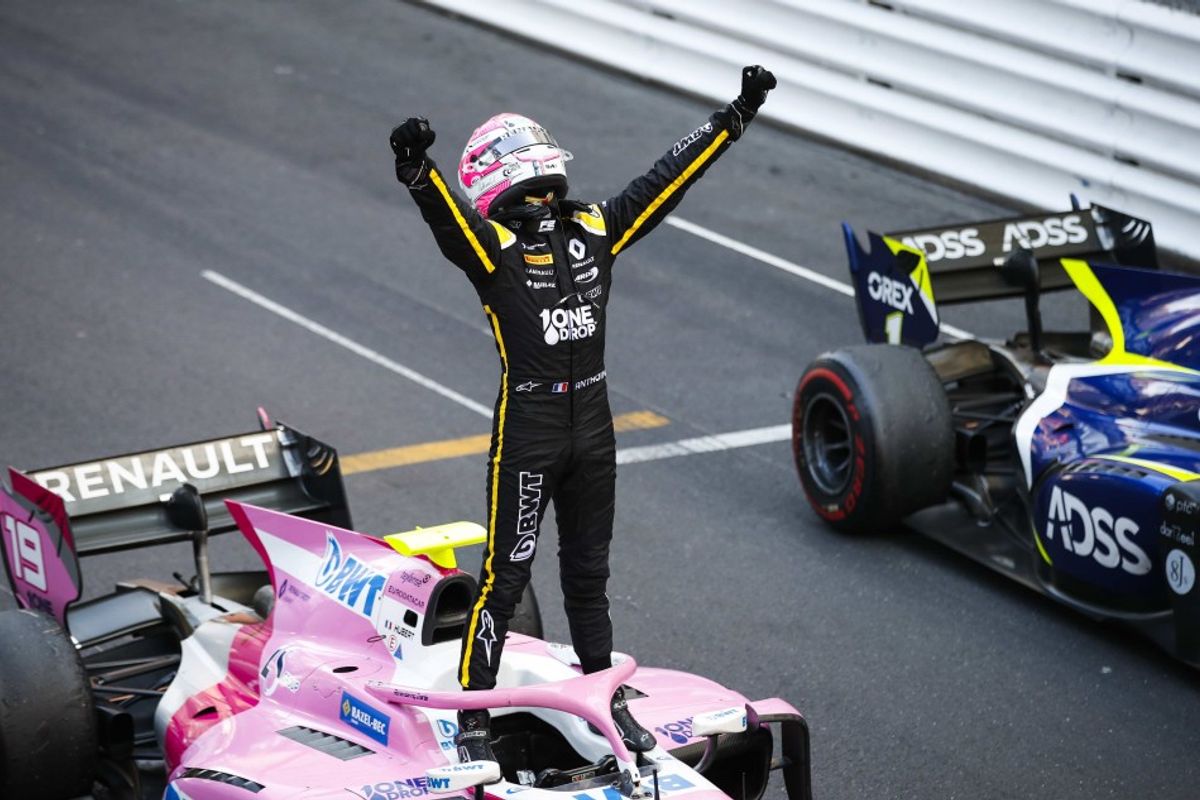 Frenchman earns maiden F2 win on the streets of Monaco

Anthoine Hubert became the season’s first rookie winner by the finest of margins in the FIA Formula 2 Sprint Race at Monaco. The Frenchman survived a late onslaught from second placed Louis Delétraz whose front-wing was just inches behind the BWT Arden’s at the chequered flag. Fellow rookie Guanyu Zhou finished in third to claim his second podium in F2.

At the start of the race, Hubert, on a new set of Soft tyres, made a good getaway to retain the lead from Delétraz, while Zhou sailed around the outside of Artem Markelov into Turn 1 for P3. Also on fresher tyres, Ralph Boschung snuck into P7 ahead of yesterday’s Feature Race winner Nyck De Vries and Sérgio Sette Câmara. The safety car brought a brief stop to the racing after Luca Ghiotto made contact with Tatiana Calderon at Turn 5, which effectively ended the Colombian’s day.

Racing resumed, but not for long: the Italian’s luckless weekend would continue when he entangled himself with Mahaveer Raghunathan at the hairpin and ended both his own, and the MP Motorsport man’s race. The marshals were swift in clearing up the mess, but Hubert was even quicker – not only did he hold onto the lead at the restart, he went on to set the fastest lap.

Despite his pace out in front, the 22-year-old had not been able to distance himself from the remainder of the front four and just 2.5s separated the quintet, who were all in search of their first F2 win.

The title fight was then given a shake-up: mechanical issues forced Boschung into retirement, while Matsushita dropped to 9th, which elevated De Vries into P6 and handed him the Championship lead.
Just over 10 laps remained and it all kicked off at the back: Sean Gelael failed to slow down at the Nouvelle Chicane and flung himself into the rear of Giuliano Alesi, which ended the Trident man’s race.

The front four had pulled away from the Campos of Dorian Boccolacci in fifth, with a sturdy 10s gap, but out in front Hubert still couldn’t shake the unrelenting Carlin of Delétraz. Despite Zhou’s continued presence behind him, his eyes refused to leave the tail of the Renault Junior with little left to go.

The Frenchman had been steadfast all race, but a momentary wobble on the final lap threatened to derail his race and he kissed the barrier. Delétraz had been gunning for this mistake, but was unable to capitalise and Hubert managed to steady his Arden and head for the chequered flag.

The Renault Junior’s dalliances with the wall would have appeared to most as Delétraz’s final chance, but the Swiss had other ideas and attempted a daring lunge at the death. His Carlin cut around the outside of Hubert on the final straight and he edged to his left, but ended just inches behind when they crossed the line.

Behind them, Zhou held on for third place in-front of Artem Markelov, Boccolacci, Sette Câmara, De Vries and Nikita Mazepin.

Out of the points, but eligible for the fastest lap, Nicholas Latifi clawed further pace from his DAMS to snatch the quickest time at the death to remain on top of the Driver’s Championship on 95 points, followed by De Vries on 94 points. Ghiotto is in third on 67 points, ahead of Jack Aitken on 62 and Zhou on 54. In the Team’s standings, DAMS top the table with 147 points, 26 points ahead of UNI-Virtuosi Racing. ART Grand Prix are in third on 100 points, followed by Campos Racing on 92 and Carlin on 60.

Racing will resume at the Circuit Paul Ricard in France in just under a month’s time, when Latifi and De Vries are sure to face up against one another once again.