Eriksson does the hat-trick: cleans up at Silverstone RX2 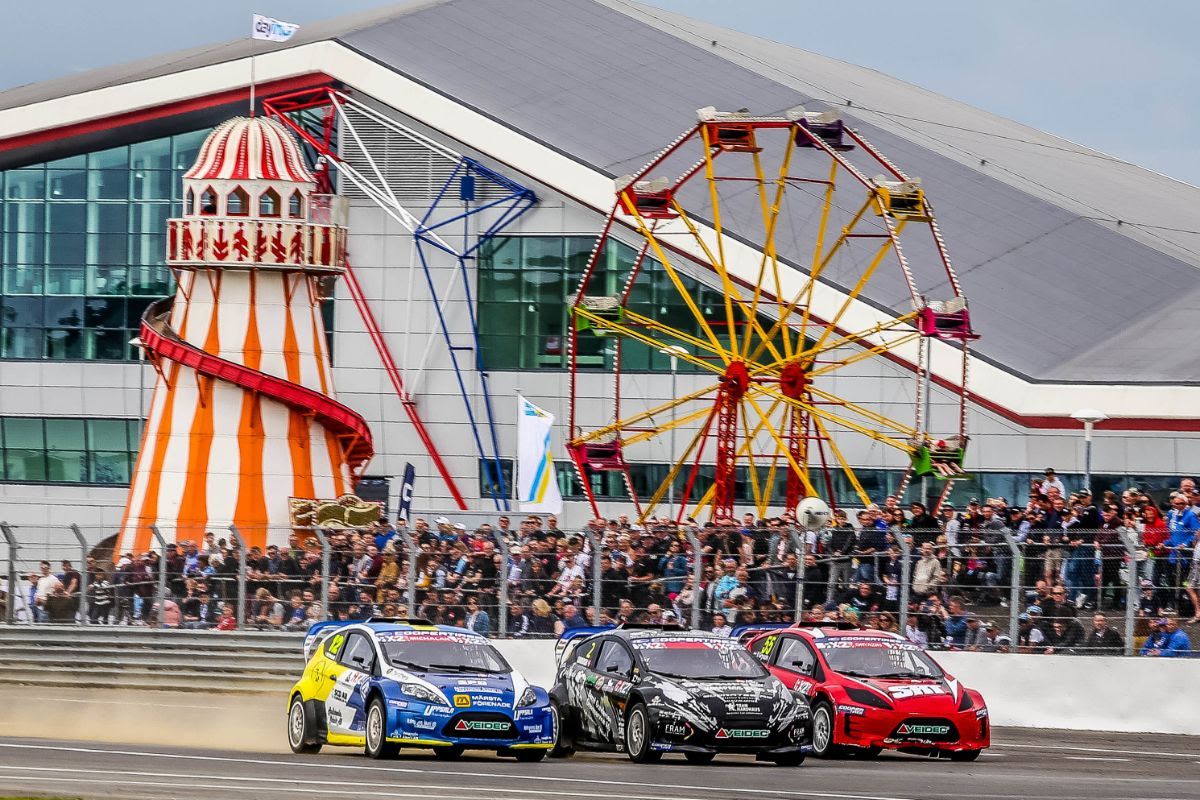 Oliver Eriksson completed an early-season hat-trick at Silverstone’s SpeedMachine Festival this weekend (25/26 May), as the RX2 International Series presented by Cooper Tires championship leader saw off all comers and survived a drama-fuelled final to maintain his perfect start to the 2019 campaign.

The third consecutive Formula 1 venue on the RX2 calendar, Silverstone produced world-class entertainment from the first lights-out to the final chequered flag – to the evident delight of the tens of thousands of enthusiastic spectators that flocked to the celebrated ‘Home of British Motor Racing’.

Eriksson was quickest out of the blocks and maintained that advantage throughout, with Olsbergs MSE stablemate Jesse Kallio and Sports Racing Technologies star Vasiliy Gryazin similarly steering clear of the chaos to join the Swede on the rostrum in second and third positions respectively.

Imperious from the outset, Eriksson took a clean sweep of fastest times through the qualifying races, occasionally aided by his closest rivals either tripping each other up or slowing each other down. As in Belgium a fortnight ago, the Swede was pushed hardest by team-mate Kallio, with JC Raceteknik’s Ben-Philip Gundersen once more a thorn in the OMSE duo’s side, albeit losing ground when he got stuck in traffic in Q3 and Q4.

Sami-Matti Trogen showed well for SET Promotion in fourth, ahead of the third OMSE entry of Fraser McConnell, who admitted to overdriving on Saturday as he got to grips with the track. The Jamaican rapidly put that sluggish start behind him, however, to fire up the order with the second-best time in Q4, perhaps inspired by words of support from countryman Sean Paul on Saturday night, as the global rap superstar and SpeedMachine stage headliner tried out the Supercar Lites cockpit for size.

William Nilsson placed sixth for JC Raceteknik – winning the plaudits for highest jump and mastering the Turn One switchback – with fellow Swede Anders Michalak a solid seventh at the scene of his finest RX2 finish to-date in 2018.

Gryazin was similarly well in the mix in eighth, ahead of reigning EuroRX TouringCar champion Steve Volders. Simon Olofsson – who was tipped into a dramatic roll at the beginning of Q2 following a first corner squeeze, thankfully emerging unharmed – and record-breaking former Olympic skier Albert Llovera brought up the order.

From pole position, Eriksson was untroubled as he led the first of the two semi-finals from start to finish – although a demon getaway from Michalak saw the Swede momentarily nose in front from the second row of the grid as he braved the wide outside line through Turn One, before being muscled down to third by Gundersen.

The top two remained safe throughout, but behind, Michalak had his hands full staving off a fired-up McConnell, whose early joker strategy failed to pay off as he lost time behind Volders. A staunch and determined defence ultimately saw Michalak progress through to the final at Silverstone for the second successive season.

Like team-mate Eriksson, Kallio faced little real opposition in semi-final two, although the fast-starting Nilsson briefly threatened to sneak between the two front row sitters at lights-out before tucking into second ahead of Trogen. The Swede, however, would eventually lose out to early jokers Trogen and Gryazin – who enjoyed a crowd-pleasing side-by-side duel along the way – as the Finn and Latvian both advanced to the final, with their disappointed JC Raceteknik rival ruing a tactical error in leaving his own joker too late.

The final was a dramatic affair, to say the least – requiring three attempts to safely navigate beyond Turn One. At the first time of asking, a coming-together between Gryazin and Michalak squeezed the latter into the tyres, and with the STS RX-run car stranded, there was no option but to red-flag the race.

A few minutes later, they tried again, but this time, Gundersen aimed his JC Raceteknik car down the inside of Kallio into an ever-decreasing gap – with much the same outcome. Trogen’s SET Promotion car was also innocently caught up in the contact, leaving him with a damaged wheel and although the Finn lined up for the third effort to get the race underway, he did not go far.

That left a three-car shoot-out for glory, with Eriksson duly commanding proceedings after shaking off the early attentions of team-mate Kallio, as the OMSE stablemates replicated their one-two finish from Spa-Francorchamps a fortnight ago and the Finn maintained his record of finishing on the podium in every event he has started. Gryazin’s third place marked the Latvian’s first visit to the rostrum in 2019.

Next for the RX2 contenders will be Hell in Norway in three weeks’ time (15/16 June), the first of three traditional rallycross tracks on the series’ calendar – and the opening leg of an eagerly-anticipated Scandinavian double-header.

Oliver Eriksson (1st): “A clean sweep – you can’t ask for any more than that! The team was amazing all weekend and gave me a great car again, so all I had to do was keep it neat and tidy and keep racking up the results. Looking at the entry list in RX2, if you’d asked me before the season started if I could win three in a row like this, I’d have said ‘no way’, but we had our fair share of bad luck last year – particularly early on – so we’ll take the good luck when it comes and everything is just seeming to bounce our way right now. It was tricky to maintain focus with the stoppages at the beginning of the final and the adrenaline rising and falling, but I just had to remain calm. Jesse was quick, but I could control the pace from the front and my spotter read the race well to enable me to stay ahead. Now we need to keep this momentum going and see if we can make it four from four in Norway – no holding back!”

Jesse Kallio (2nd): “I’m happy with second place – it continues our great start to the season with a podium at each event and represents more good points towards our championship challenge. It was tight all weekend with a lot of quick drivers in the field, and we had to fight pretty hard. I had a clean run from pole position in my semi-final, though the final was obviously far more dramatic! I tried to put Oliver under as much pressure as I could, but he doesn’t make many mistakes – he’s certainly a tough nut to crack. We also had a small issue with the brakes, but it wasn’t bad enough to affect the overall result. There are plenty of positives to take away with us and I still have a lot to learn in RX2 – it’s all about the small details, but we are getting closer each time. I’ve got good memories from Hell after winning there last year in Super1600. It’s a real old-school rallycross track and you can properly push the car there – I’m looking forward to it.”

Vasiliy Gryazin (3rd): “It feels great to take our first podium of the year. Silverstone is one of my favourite tracks on the calendar and SpeedMachine is a fantastic event, so I really enjoyed coming back. We had good pace on Saturday, but I didn’t feel 100 per cent today so it took more effort to stay focussed and I didn’t have quite the same confidence in the car. Still, I had a fun fight with Nilsson and Trogen in the semi-final and Lady Luck was definitely smiling on me in the final. By the time it came to the last re-start, we had a problem with the clutch – any more stoppages and I think we’d have been finished. I had to really take it gently at the start, but thankfully she held out and here we are.”

Andreas Eriksson, RX2 International Series presented by Cooper Tires CEO: “The second edition of SpeedMachine was another fabulous weekend, with a fantastic festival atmosphere, big crowds and some awesome live music – though ultimately, it was the rallycross action that stole the show and our RX2 boys played a major part in that. We saw last year that this track generates some great racing, and it was a similar story 12 months on. Congratulations to Oliver and Jesse on another one-two finish for OMSE, and to Vasiliy on achieving his first podium of the season – I’m sure it won’t be the last. Now, we move on to Norway and one of the world’s most iconic rallycross circuits – and I for one am looking forward to one Hell of an event.”