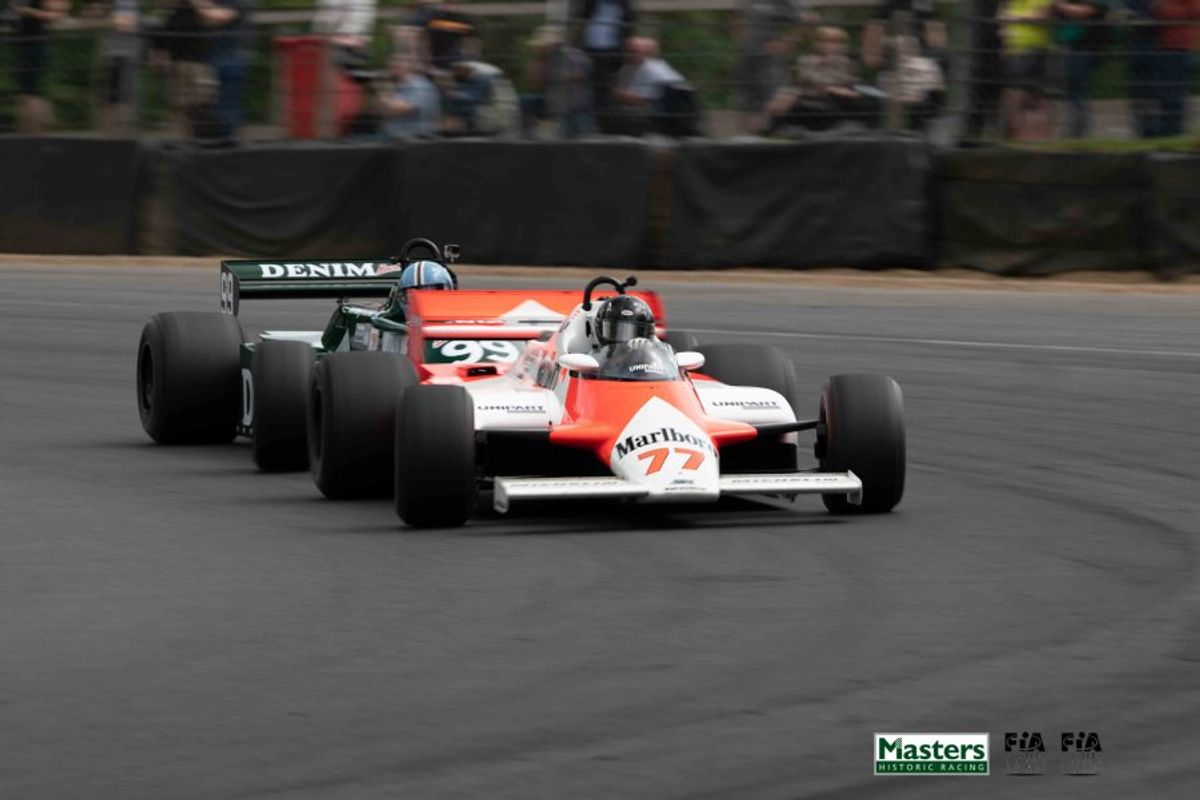 Steve Hartley delivered a corker of a race to win the second FIA Masters Historic Formula One race at Brands, his McLaren MP4/1 passing early leader Jamie Constable (Tyrrell 011) and keeping Martin Stretton (Tyrrell 012) at bay until the safety car came out on lap 12 after an off by Mike Cantillon in the Williams FW07D. The race finished under the safety car.

I REALLY ENJOYED THAT”, HARTLEY SAID, “I CAN’T EVEN REMEMBER THE LAST TIME I WON. IT MIGHT HAVE BEEN HERE AT BRANDS ACTUALLY!

YES, I COULD REALLY HAVE DONE WITHOUT THE SAFETY CAR”, SAID STRETTON, “BUT IT’S WHAT HAPPENS…

Christophe d’Ansembourg (Williams FW07C) took fourth – and effectively third because Hartley’s McLaren was still in the invitation class – ahead of Matteo Ferrer-Aza (Ligier JS11/15). The Belgian had been chasing Constable in the early laps before succumbing to pressure from Hartley and Stretton on lap 9.

I’VE NEVER BEEN PERFORMING VERY WELL AT BRANDS”, SAID D’ANSEMBOURG. “SO A PODIUM HERE IS NOT BAD, BECAUSE I USUALLY STRUGGLE HERE.

From the back of the grid, Henry Fletcher stormed to sixth overall to claim pre-78 honours in his March 761 – despite a nose bleed from lap 2! James Hagan’s Hesketh 308 took second in class, Jason Wright was third in the Shadow DN8. Following Stretton home in the post-83 class were Ian Simmonds (Tyrrell 012) and Mark Hazell (Williams FW08) in ninth and 11th overall respectively.

I CAN’T EVEN REMEMBER, I JUST WENT”, FLETCHER SAID ABOUT HIS STORMING OPENING LAP. “IT WAS REALLY GOOD FUN, TRYING TO PASS THE GROUND-EFFECT CARS IS REALLY DIFFICULT.

“The car was handling much better”, Hagan said. “I really wanted to beat Phil Hall – it makes such a difference when you have a race with someone, so I didn’t enjoy to see him go.”

I DON’T DESERVE TO BE HERE”, WRIGHT SAID, “I SPUN AGAIN – THREE TIMES NOW IN THE SAME CORNER THIS WEEKEND…

From the first row of the grid, Jamie Constable was soon past reversed-grid polesitter Jonathan Holtzman (Lotus 87) to open up a good 4-second lead over D’Ansembourg, who had Hartley chasing him in the McLaren, with Cantillon, Stretton and Ferrer-Aza all coming through to pass Holtzman as well. On lap 5, Stretton past Cantillon into Paddock Hill Bend to take fourth.

In the pre-78 class, Fletcher pulled off a demon first lap from last on the grid to be 11th on lap 1 and eighth on lap 4, and in the lead of the class, ahead of Hagan, Hall and Wright. At the back, Michael Lyons was out on lap 1, coasting to a halt at Graham Hill Bend in a car repaired from his off in the first race.

On lap 7, Constable maintained his 4-second lead over D’Ansembourg who now had Hartley, Stretton, Cantillon and Ferrer all breathing down his neck. The next lap, Hartley was up into second, with Stretton following suit at the start of lap 9. Behind them, Ferrer in sixth set fastest lap of the race, the Italian having been ahead of Cantillon and Stretton after the first lap before a mistake dropped him back behind them.

Now in sixth overall, Fletcher continued to imperiously lead the pre-78 class, well ahead of Hagan, but Phil Hall lost third place in class when he had to pit his Theodore on lap 9. The place was inherited by Wright, who in 12th place was chasing post-83 competitors Ian Simmonds (Tyrrell 012) and Mark Hazell (Williams FW08), the pair sandwiching Warren Briggs in the McLaren M29.

Freed from D’Ansembourg, Hartley set about chasing the leader, and within two laps, the Tyrrell and the McLaren were nose-to-tail, with Stretton looking an attentive third. On lap 11, Hartley swept into the lead, with Stretton aiming for the next opportunity, which came into the same lap. Six seconds down the road, D’Ansembourg kept firm to hold up the quicker cars of Cantillon and Ferrer, before Cantillon went off at Stirlings, provoking the arrival of the safety car.

As the race finished under the safety car, Hartley took a wonderful win in his McLaren MP4/1, ahead of Stretton and Constable, with Fletcher taking the pre-78 class.