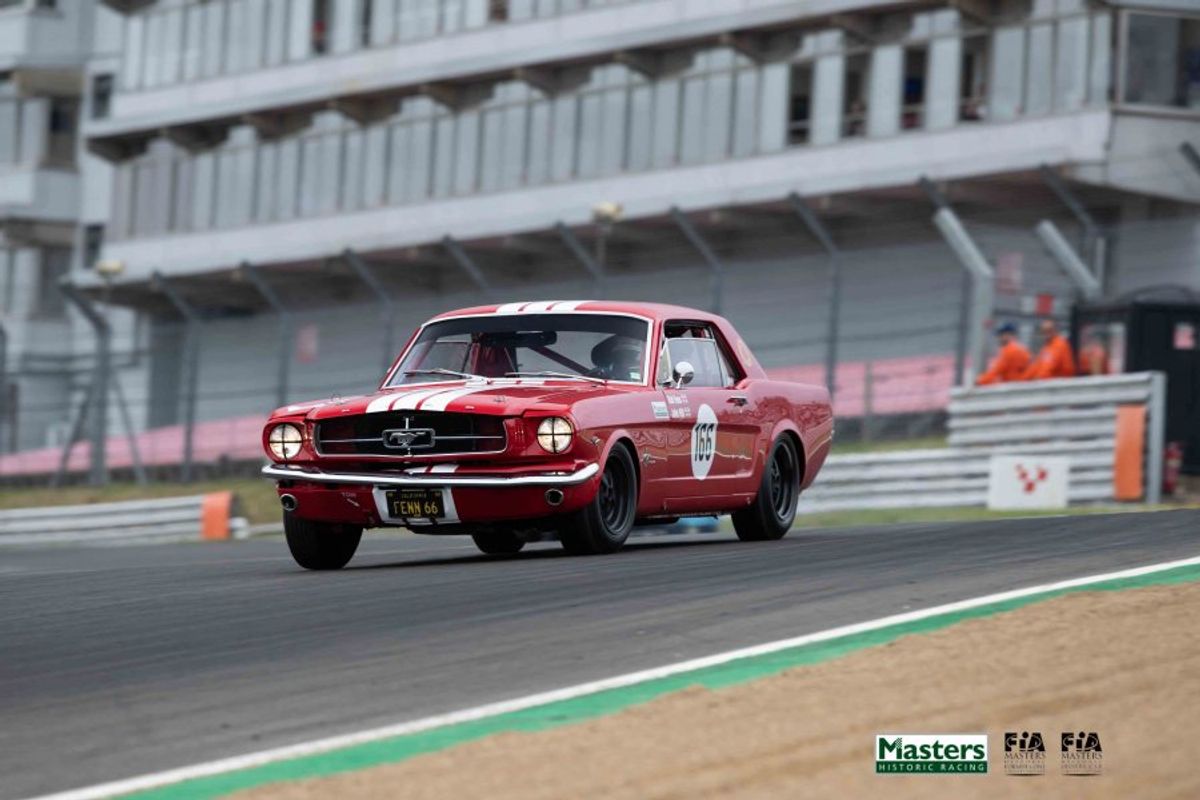 Rob Fenn and Jake Hill took Masters Pre-66 Touring Car honours at Brands Hatch, Hill in the Ford Mustang passing Mark Sumpter’s Lotus Cortina for the lead on lap 20. Third went to Craig Davies, whose Mustang led until a frantic pitstop phase coinciding with a safety-car period that shook up the order.

Rob did an amazing stint to keep it up there, even though he got caught up between all the Cortinas”, said Hill. “And then we boxed at the perfect time! I came out in second and for two laps had a good little fight with Mark. We’re so happy to take our first Masters win with the Mustang here at Brands.

I’D LIKE TO SAY IT WAS SKILLED!”, A LACONIC SUMPTER SAID ABOUT HIS PITSTOP TIMING, “I CAME IN TO SEE IF WE COULD FIX OUR WIPERS – AND THEN THE SAFETY CAR CAME OUT! I HAD A GOOD FIGHT WITH JAKE, I MADE IT AS HARD AS I COULD FOR HIM, BUT YOU CAN’T REALLY STOP A MUSTANG WITH A GOOD DRIVER. STILL, I’M REALLY HAPPY TO HAVE WON THE CLASS.

Behind Davies, Julian Thomas and Calum Lockie took fourth in the Ford Falcon, having been second behind Davies early on, with poleman Ambrogio Perfetti coming in fifth in the second of the Cortinas. The Tom Ingram/Marco Attard Cortina grabbed third in class.

I’M A BIT PEAVED BY THAT”, SAID DAVIES ABOUT LOSING OUT AT THE PITSTOPS. “IT WAS A BRILLIANT RACE TO BE IN, BUT I JUST GOT THE PITSTOP WRONG!

At one time running third overall, Tom Bell and Joe Ferguson took a brilliant win in the Mini class, ahead of Jonathan Lewis and Ian Curley/Bill Sollis. Curley led the class early on before the Bell/Ferguson Mini asserted its authority.

“It’s nice to come back against some real, real good competition”, said Ferguson about their second win of the season.

YES, A GOOD START OF THE SEASON”, SAID BELL, LOOKING BACK ON THEIR EQUALLY STRONG WIN AT PAUL RICARD. “NEXT UP IS DONINGTON PARK, AND WE BOTH LIKE DONINGTON, SO THERE WE HOPE TO BE FIGHTING FOR THE WIN AGAIN!

The field was unleashed on lap 3, after an initial safety-car period as a result of the Peter James/Chris Snowdon Mini retiring at Graham Hill Bend. In five laps, Craig Davies stormed into the lead, his Mustang consequently building a lead of 10 seconds while he left his rivals squabbling over second place. Julian Thomas in the Falcon saw poleman Ambrogio Perfetti switch places with Steve Soper several times, with Sumpter and Geoff Letts doing the same behind them, chased by Rob Fenn’s Mustang, which had been fifth early on. Behind Fenn, the Mini battle raged between Ian Curley, Tom Bell and Jonathan Lewis, the latter leading the group on lap 3 before Curley asserted himself at the head of the group.

On lap 8, though, a sprinkle of light rain threw up the order, Geoff Letts moving up to second in the space of two laps while cutting Davies’ lead by four seconds. Lockie now held third ahead of Perfetti, Soper, Sumpter and Hill, with Tom Ingram also using the drizzle to move his Cortina up to eighth, ahead of the leading Minis.

For a few laps, the rain abated but upon opening of the pit window, it returned to make it even harder for all the runners – and then, to make it even more confusing the safety car was out two minutes into the pit window! Davies still led Letts, but by just three seconds. Thomas and Perfetti were battling for third, six more seconds adrift, while Soper, Sumpter, Fenn and Ingram all went in on the first occasion. One lap later, Davies, Letts, Thomas, Perfetti and the Minis of Curley, Bell and Lewis took the next opportunity.

While William Ward’s stricken Mini was removed from Clearways, Mark Sumpter’s Cortina emerged from the frantic pitstop phase as the new leader, followed by Hill in the Cortina started by Fenn, with Attard in third, Mark Martin (having taken over from Soper) in fourth, and Marcus Jewell’s Cortina suddenly popping up in fifth, ahead of Lewis, early leader Davies, Joe Ferguson in the Mini started by Bell. Norwegian Martin Strömmen was up to ninth in his Cortina while the Curley/Sollis Mini (now with Bill Sollis at the wheel) rounded out the top-ten. The Letts brothers and Perfetti were among the losers of the shake-up.

The green flag was waved on lap 18, and Jake Hill immediately set about chasing Sumpter, the Mustang passing the Cortina as they entered lap 20. Joe Ferguson was flying the Mini flag in an amazing third overall, with Craig Davies already back up into fourth, ahead of a phalanx of Cortinas pedalled by Attard, Jewell, Perfetti and Mark Martin, all sandwiching Calum Lockie (having taken over from Thomas) in seventh in the Falcon. Later on the same lap, though, Davies passed Ferguson for third.

Setting fastest lap of the race on lap 22, Hill inched away from Sumpter, but Davies wasn’t catching the two leaders yet. Ferguson was still fourth but Lockie had got ahead of Attard for fifth while Perfetti passed Jewell for seventh, and then Attard to take sixth. Further back, in 12th overall, Lewis was into second place in the Mini class, having passed Sollis, who in turn was ahead of emphatic BMW class leader Tom Sharp.

Towards the end, Davies began pulling out fastest race laps to close on Sumpter, but came up a lap short to really pose any danger to the Cortina. So Hill took the win with three seconds in hand on Sumpter, with Davies two seconds further back. Fourth was the Thomas/Lockie Falcon while Perfetti came back to take fifth. Tom Bell and Joe Ferguson claimed sixth overall to consummately win the Mini class ahead of Lewis and Curley Sollis.