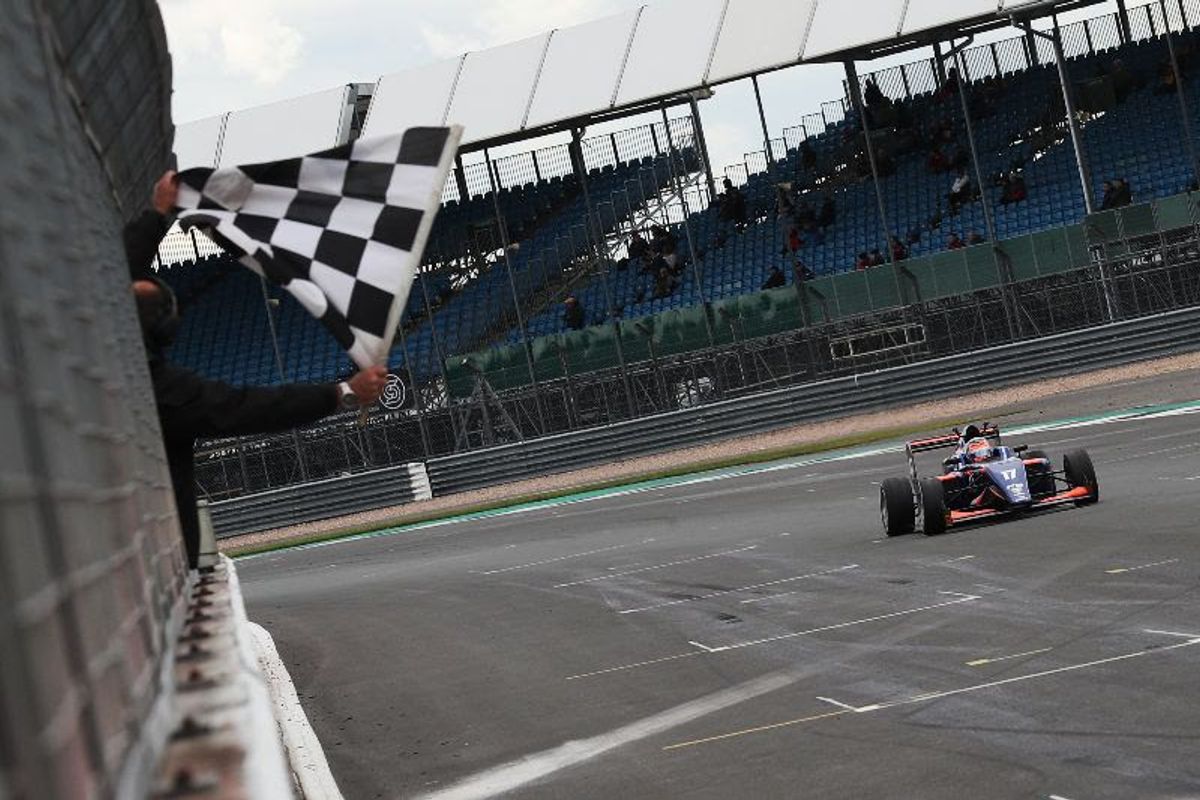 BRDC British F3 Championship leader Clement Novalak converted pole to victory in a thrilling first race of the weekend at Silverstone.
Novalak made a good start and built a decent gap at the front while behind him there were several enthralling battles as the field made the most of the wide expanses of the Grand Prix Circuit.
Novalak's victory means he has a 57 point lead over Fortec's Johnathan Hoggard, who climbed from 17th on the grid to seventh in the race. Two more races will follow at 11.10 and 15.55 tomorrow (Sunday).

Qualifying
Novalak claimed pole position for the opening race at Silverstone with a last gasp lap in a race soaked qualifying session. Neil Verhagen meanwhile will start race three from pole based on second fastest qualifying times for each driver.

Ayrton Simmons set the second quickest time in the session with his last effort but was half a second off Novalak, and 0.003s ahead of Verhagen who had several spells at the top of the times.

Kaylen Frederick's late effort elevated him to fourth, 0.166s ahead of Fortec's Manuel Maldonado with Hampus Ericsson sixth on the race one grid for Double R Racing.

Fortec's Hoggard was seventh quickest, 0.001s behind Ericsson but dropped 10 places on the grid thanks to a penalty carried over from Snetterton. Kiern Jewiss climbed into the top-10 with his last lap, 0.150s clear of Carlin's Lucas Petersson, with Hillspeed's Sasakorn Chaimongkol completing the top-10, just ahead of team mate Nico Varrone in his first British F3 qualifying session.

Conditions improved markedly during the session, with times improving by over seven seconds throughout. Hoggard was the initial pace setter on a 2m34.033s and trimmed three seconds off that next time around.

Novalak took over at the top with his first flier, only for Hoggard to claim the spot back on his next tour. Debutant Varrone was another to top the times after shaving three tenths off Hoggard's best at that point, before Simmons and Verhagen took turns at the top.
Novalak went fastest once more with nine minutes to go and improved again on his next lap, only for Verhagen to take over again with a couple of laps within a tenth of each other.

Simmons looked on course for race one pole with his fastest lap just as the chequered flag flew, only for Novalak to claim pole with the last throw of the dice.

Race one
Novalak made a good start from pole and built up an early lead while Simmons and Verhagen engaged in an epic scrap, with Simmons eventually claiming second on the road with Verhagen third.Frederick benefited from a late collision between Ericsson and Jewiss to take fourth for Carlin ahead of Maldonado, with Chaimongkol sixth.

Hoggard climbed from 17th on the grid to take seventh ahead of the front wing-less Ericsson who made contact with Jewiss late on, with De Pauw and a recovering Jewiss completing the top-10.

At the start, Novalak had a good getaway to hold the lead down to Copse with Simmons slotting into second with Verhagen and Frederick holding position also, while Jewiss climbed up to fifth from seventh on the grid. Frederick had a moment at Abbey though while battling for position, and dropped down to seventh, promoting Jewiss to fourth.

Novalak had a lead of 1.6 seconds at the end of lap one, as Simmons and Verhagen began an epic battle that lasted for much of the race. Verhagen got into Simmons' slipstream down the Wellington straight and challenged at Brooklands with the pair going wheel to wheel through Luffield, Woodcote, down the start finish straight and through Copse before Verhagen completed the move at Becketts.

Novalak's lead was up to 2.506s at the end of lap two as Verhagen attempted to pull away from Simmons, who was busy fending off a charging Jewiss. However Simmons showed his pace by setting a fastest lap on the third tour, and began to close on Verhagen again. By lap six they were back together and Simmons went around the outside of Stowe corner, kept his foot on it over the kerbs and made a move stick up the inside of Vale. Verhagen fought back on the run up to Abbey and was close enough to try another move around the outside of Copse on lap seven, only for Simmons to finally fight him off.

By this point Novalak had a lead of 4.5 seconds over the pair, with their squabble allowing Jewiss in fourth to close right up them too, with a long chain of cars separated by just a few seconds. Simmons, finally with clear air behind him, set his attentions on Novalak, and closed the lead down by half a second at the end of lap seven. He shaved eight tenths off on lap eight, and seven tenths on lap nine, with the winning margin eventually being just over two seconds.

With Simmons clear of Verhagen, the next focal point was the battle for fourth between Jewiss and Ericsson. The pair were squabbling from lap five onwards, with the Swedish driver attempting a move at Stowe and Vale, and getting into the slipstream down the Wellington straight, with Jewiss holding firm. Ericsson tried again on lap nine, the pair going wheel to wheel at Brooklands and Luffield, with the scrap allowing Verhagen a clear run in third. The battle ended in tears on the last lap though, with Ericsson trying a move up the inside at The Loop and making contact with the rear of Jewiss, delaying both drivers and wiping off Ericsson's front wing.

That incident benefited Frederick who had fallen as far as seventh in the race after his lap one moment, but fought back well and was in the right place at the right time to claim fourth, just over six tenths clear of Maldonado, while Chaimongkol climbed from ninth on the grid to secure sixth, despite ending lap one in 10th place.

Hoggard started 17th after his penalty from Snetterton, but enjoyed a good charge through the field. He was up to 12th on lap one, broke into the top-10 on lap two and ninth at the mid race point, before the Jewiss/Ericsson incident saw him gain two more places on the final tour. Ericsson secured eighth ahead of De Pauw and Jewiss.

Series newcomers Andreas Estner and Nico Varrone claimed 15th and 17th places respectively. Varrone was particularly impressive, running as high as ninth on lap one but had to make a pit stop to repair damage on lap two, while Estner kept his nose clean to secure a haul of points.Benjamin Pedersen was also in the wars and had also run as high as ninth but lost places on lap three and more on lap four when he was passed by Josh Mason at Village and then saw Pavan Ravishankar spin in front of him seconds later. Pedersen had a visit to the pits and though he re-emerged, was classified in last position, and therefore will start on pole for race two tomorrow.

Post race the incidents between Simmons and Verhagen, and Jewiss and Ericsson were investigated by the Clerk of the Course. Simmons was found to have left the track with all four wheels while overtaking Verhagen and will be handed a four second penalty, while Ericsson was found at fault in the incident with Jewiss and will be handed a ten second penalty. A third investigation is to be heard tomorrow morning, after which a revised race result and championship standings will be issued. The top-three on the podium were presented with their trophies by former BRDC F4 contender and BRDC member Harrison Newey, who now races in SuperFormula in Japan, and in British GT this weekend.

Clement Novalak
"At the end I was partly easing off but I also had quite a bit of tyre deg so I took it easy so as not to kill the tyres completely. It seems like Ayrton managed to save his tyres a lot more but all in all it was a good race. We will have to see tomorrow with the reverse grid but it's a good overtaking track here so we can make some ground up. In race three starting P2 we can hopefully make a good start and try and copy this result.

"We had a set-up from Thursday as we had a busy day on Thursday, so the set-up was good but perhaps too good for what the track was today so we had a bit of oversteer throughout the whole race. But all in all I'm pretty happy with how we've adapted because when you've not had a dry track for two days it's difficult to get back."

Ayrton Simmons
"It's a bit frustrating [to be second], given the pace we had after we got back past Neil, but the battle we were having for P2 was pretty good and I really had fun out there. Then after that I just kept my head down and we closed the gap by two and a half seconds in the laps where we had clear air so what would have happened if we kept P2 at the start you never know. But I'm still really happy with P2, the team have worked really well from the wet conditions to give me a really good dry car.

"The battle was scary! We were both going for it and we weren't going to back out so at the end of the day it was about who was in the right place. In the end we had a bit more pace than him, but it was great fun and hopefully we can have that battle for P1 next time! It's really good points, we need to start winning races though as we've been P2 a couple of times and P3 and we'll be pushing hard for the win and it can surely happen this weekend."

Neil Verhagen
"I would say the better part was in the first half of the race and on lap one, whenever I got by. We'll have to take a look into why we were lacking pace compared to Ayrton and Clement mid-race. It was a good battle and I tried my hardest to keep him behind me but it just wasn't enough at the end of the day. We're still happy to be on the podium but we could definitely have got second."