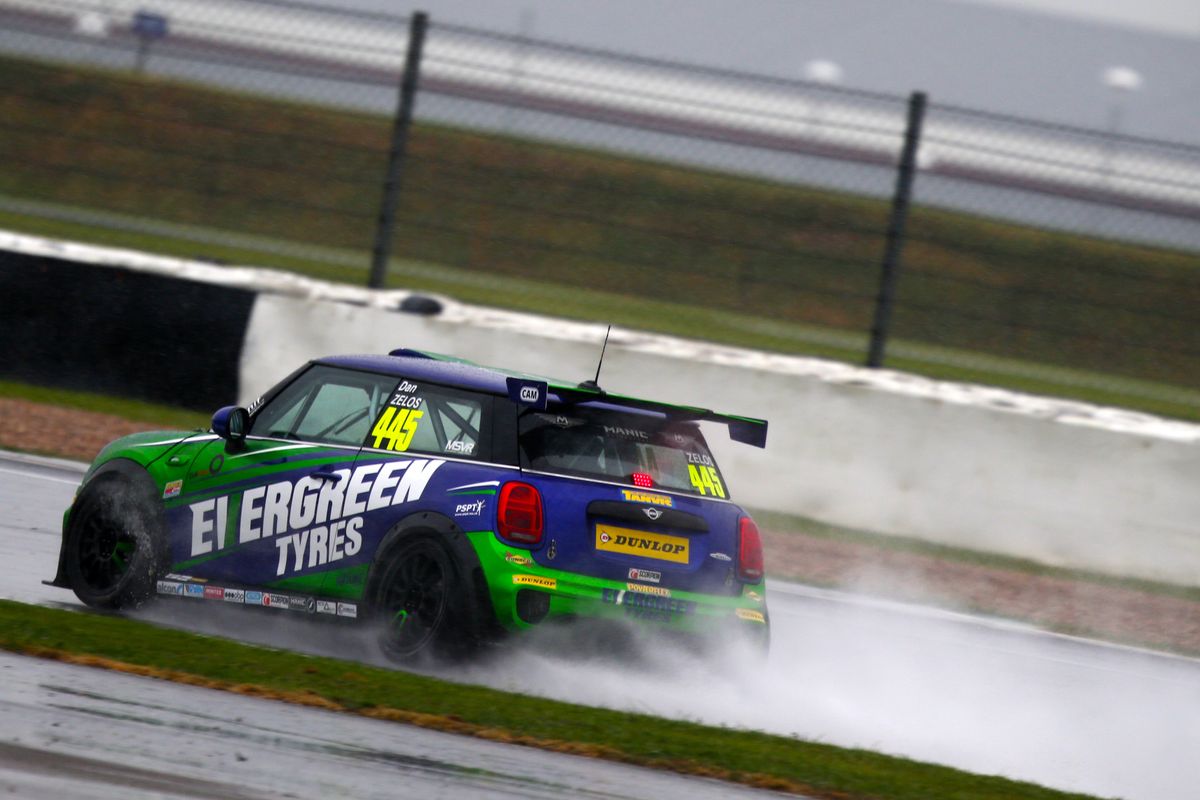 Dan Zelos maintained his momentum as the 2019 MINI CHALLENGE sped into Silverstone – last weekend (8/9 June), with a brace of feisty performances yielding another podium finish to keep him in contention for the coveted crown.

He might be in his maiden campaign in the hotly-disputed single-make series, but he has already established himself as one of the fiercest competitors in its headlining JCW class.

Having never previously driven the full Silverstone GP circuit and with testing taking place in monsoon-like conditions, Zelos headed into qualifying with no prior experience of its demanding 3.66-mile layout in the dry, but he did not let that hold him back. Despite having to essentially ‘guess’ what set-up to run on his Evergreen Tyres and CAM Systems-sponsored MINI, he grabbed the 265bhp ‘pocket rocket’ by the scruff of its neck and hauled it to an excellent third on the grid amongst the 30 high-calibre protagonists, less than two tenths-of-a-second shy of pole position.

Zelos held his nerve on the outside line to steal second at the start of race one, but an attempted ‘hero moment’ as he subsequently endeavoured to snatch the lead from James ‘Jiggy’ Gornall sent the strikingly-liveried MINI UK VIP entry bouncing across the grass and down to fourth, with the wild ride costing the car its front splitter and knocking its tracking askew.

Rapidly regaining his composure, Zelos set about chasing down the leading trio and was right on their tail by the chequered flag, flashing past the finish line less than a second-and-a-half behind the winner as the top four proved to be comfortably the class of the field.

From third on the partially reversed grid for race two, the 21-year-old benefitted from an off-piste excursion for the leader on the opening tour to advance to second. He was sizing up a move for the top spot later around the lap when he found himself tagged from behind by an over-ambitious rival, shuffling him down to fifth.

After swiftly zeroing back in on the top three, Zelos’ progress was halted somewhat by Gornall – the ultra-experienced ex-British GT champion knowing just where to put his car to frustrate his pursuer’s efforts to find a way past – until the championship leader suddenly slowed with three laps to go. That elevated the Norwich University of Arts Graphic Design undergraduate and former Dereham Sixth Form College student to third – albeit now with team-mate Nathan Harrison breathing down his neck.

The pair quickly caught Tom Rawlings, but when Zelos was baulked by the second-placed man at the end of the Hangar Straight, Harrison swept around the outside – before they both succeeded in leapfrogging the erstwhile leader a handful of corners later. Just 1.5 seconds from victory again, the result extended the East Anglian ace’s record of standing on the podium at every event so far in his MINI CHALLENGE career – with his best score to-date keeping him well in touch in fourth position in the title table ahead of the next outing at Donington Park on 22/23 June.

“It was another consistent and very rewarding weekend,” he reflected. “The conditions in testing were just about the worst I’ve ever encountered on a racetrack, but I was still able to put a lot of laps on the board – even if that ultimately didn’t mean very much with the following two days being dry.

“I must admit, to get to drive the full Silverstone GP circuit was pretty special – the only previous experience I had was on the F1 game! It’s an amazing track and you’re on-the-edge for a lot of the lap, with the high-speed corners certainly favouring the brave. You really need to feel confident to push to the limit.

“Qualifying was a bit of a shot in the dark, and we didn’t quite nail the set-up so I was slightly surprised – and very happy – to line up third, especially as I knew there was more time to be found from both myself and the car.

“I got a great start in race one and closed right onto the back of ‘Jiggy’ on the first lap. For a split-second, I thought I could be a hero by sending it around the outside going through Maggotts and Becketts, but the rear just stepped out on me. I managed to correct a big slide, but it put me briefly onto the grass and with dirt on my tyres, I lost momentum through the next sequence of corners and had to get my elbows out a bit to avoid conceding too many positions.

“The damage to the splitter affected our straight-line speed a little from that point on, but I don’t regret trying the move – if you think you have a chance, you have to give it a go and we still came away with a top four finish.

“In race two, I genuinely believe we would have won had I not been sent sideways on the opening lap. The contact knocked my tracking out again, and whilst the driver that hit me later apologised and it obviously wasn’t intentional, it did cost us a real shot at victory.

“After that, the time I lost behind ’Jiggy’ allowed Nathan to latch onto my tail. He was clearly on a mission and when I then got a run on Rawlings going down the Hangar Straight, I was in an awkward position. Tom defended and I had to go defensive too, or else Nathan would have slung it up the inside, but equally, that hemmed me in – it was one of those damned if you do, damned if you don’t scenarios. It was good teamwork for us to both subsequently get past Tom the way we did, and I was still very pleased to achieve another podium.

“I’m feeling very much at one with the car at the moment, and we’re continuing to regularly rack up the points when some of our main rivals are more up-and-down. We’re right there in the championship hunt, and the single dropped score rule in the MINI CHALLENGE also means none of the others can really afford to slip up again. We’re definitely contenders.”

Dan is seeking further partners to join him in 2019. If you are interested in getting involved in life in the fast lane by sponsoring him on his exciting high-speed journey, please contact: dan@danzelos.com