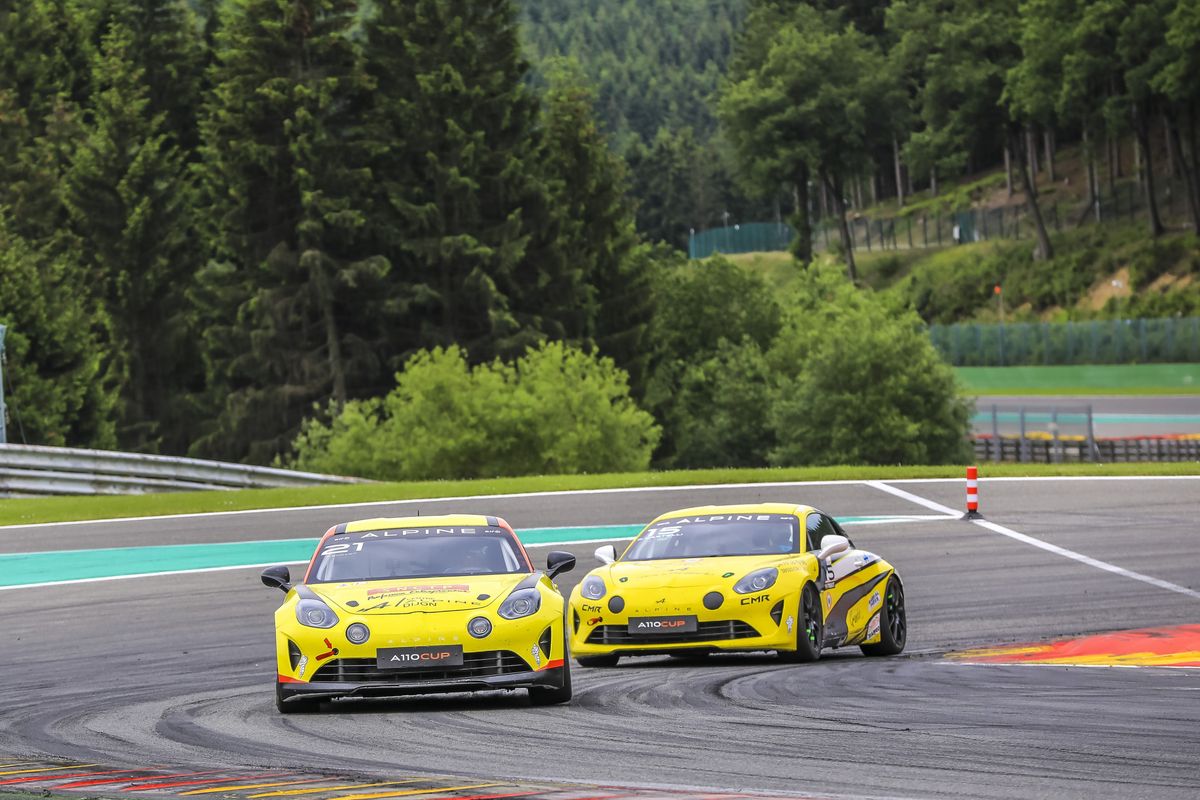 Marc Guillot (Milan Compétition) and Gaël Castelli (CMR) claimed their respective first wins of the year at Circuit Spa-Francorchamps. Both drivers scored a ton of points this weekend to move into the top two positions in the general classification ahead of the second half of the season.

In Friday practice, Marc Guillot kicked off a fast-paced weekend as he bested the track record for the Alpine Elf Europa Cup with a time of 2:34.672s ahead of Gaël Castelli and Mateo Herrero (Milan Compétition).

RACE 1: CASTELLI DELIVERS!
The pace accelerated on Saturday with Gaël Castelli taking the pole with a lap of 2:34.069s at the conclusion of a session where the top eight were covered by just 0.7s.

At the start, Gaël Castelli held onto the lead ahead of Mateo Herrero while Marc Guillot overtook Vincent Beltoise (Racing Technology) for third place as Jean-Baptiste Méla (Autosport GP) looked on.

The leading trio stayed tightly bunched while pulling away from the rest of the field. Marc Guillot used the draft to move ahead of Mateo Herrero on lap three. Further back, Vincent Beltoise couldn’t hold off Jean-Baptiste Méla and Mike Parisy (CMR). The two quickly closed the gap to Mateo Herrero, who ceded his place three laps from the chequers.

In spite of the efforts of Marc Guillot, Gaël Castelli went on for his first victory in the Alpine Elf Europa Cup with a two second margin of victory. Junior category driver, Jean-Baptiste Méla completed the podium after fending off the non-stop attacks from Mike Parisy.

Laurent Hurgon (Autosport GP) made his way past Mateo Herrero on the final lap to finish fifth and make up for the points lost following a post-race technical checks in race two at Hockenheim that saw him lose a podium result. At the end of an intense battle that saw four drivers battle in the Radillon, Julien Neveu (Autosport GP) was seventh ahead of Alexandre Gadois (Autosport GP), Antoine Miquel (Milan Compétition) and Nicolas Milan (Milan Compétition).

RACE 2: GUILLOT GETS HIS REVENGE
Gaël Castelli took his second pole position of the weekend on Sunday with a best lap of 2:33.419s despite his best lap being disallowed for not respecting the track limits. On the grid, Gaël Castelli lined up ahead of Marc Guillot with Mike Parisy and Vincent Beltoise on row two ahead of Mateo Herrero.

Like the day before, Gaël Castelli completed lap one in the lead despite the pressure from Marc Guillot. In their duel, the two immediately built a lead from the chase group led by Mike Parisy.

On lap five, Marc Guillot attempt a first, but unsuccessful attack on Gaël Castelli. The leader continued to resist when he tried again two laps later, but he committed an error that his rival was able to take advantage of on the following lap.

In a field where ten drivers were covered by less than four seconds behind Mike Parisy, Alexandre Gadois was putting on a show. 16th on the grid, the Alpine Elf Europa Cup newcomer was soon in contention for a podium finish before falling victim to the slipstream.

Despite the pressure behind him, Marc Guillot held on for his first success of the year ahead of Gaël Castelli. Further back in the field, the battled raged on just until the chequered flag with Julien Neveu trying everything he could before spinning out on the pit straight. Mike Parisy held on for third place in front of a Junior trio composed of Jean-Baptiste Méla, Mateo Herrero and Alexandre Gadois. Vincent Beltoise, Nicolas Milan and Laurent Hurgon also benefitted from the error committed by Julien Neveu to move ahead of him in the top ten.

Among the Gentlemen, local driver Philippe Bourgois got the better of Mathieu Blaise on lap one to stay ahead just until the finish. Marc Sevestre completed the podium.

Marc Guillot is the new leader in the general classification with a seven-point lead from Gaël Castelli. Junior category leader Mateo Herrero is another 15 points adrift. In the Gentleman category, Mathieu Blaise still leads ahead of Marc Sevestre and Franc Rouxel (Racing Technology).

The Alpine Elf Europa Cup now takes a long summer break before the season will roar back to life on September 6-8 at Silverstone.

QUOTES
Gaël Castelli (winner race 1)
“I have been waiting a long time for this victory! We have often been close, but I really wanted to win at Spa, which I love. I knew that Marc was just as comfortable as I am and extremely quick on this track. I was afraid he would use the draft to pip me for the win on Saturday, but I managed to hold him off. It was more difficult on Sunday, but the most important thing was to score a lot of championship points.”

Marc Guillot (winner race 2, leader in the general classification)
“This first win of the year feels great. The team has done a good job with the Alpine A110 Cup since Hockenheim to allow us to continue our march forward. I am getting more and more comfortable in the car and while I couldn’t do anything more against Gaël on Saturday, I think we made the difference with the setup for Sunday. He was hard to overtake, because he was fast and he braked late, and it was just as hard to hold him off just until the finish! I now lead the general classification, but there is still a long way to go in the season and I think it will all come down to the final race!”

Jean-Baptiste Méla (winner Junior category race 1 & 2)
“I really wanted to comeback strong following my controversial performance at Hockenheim and I think I did that. Both races were very good and intense all the way to the finish because I had to fend off Mike on Saturday. Despite my poor start on Sunday, I managed to score some good points by picking up several places in the last corner. It was a huge emotional lift in just a few seconds! Marc and Gaël created some gap in the general classification, but the Junior title is my objective and this weekend I was able to close the gap to Mateo.”

Mathieu Blaise (winner Gentlemen category race 1)
“It was another very interesting and hotly contested weekend with Marc and Arnaud on Saturday, then with Philippe on Sunday. I had some great moments on what is a legendary circuit and I really want to congratulate the work done by my mechanic. After my off in free-practice, he did an amazing job to repair the car and allow me to be ready for qualifying. I owe this win to him!”

Philippe Bourgois (winner Gentlemen category race 2)
"I really wanted to be on the podium for my home race, and preferably on the highest step. I was extremely disappointed on Saturday, but my start in the Sunday race allowed me to get the better of the pole winner in the category. Mathieu came charging back and I had no room for mistake as he was constantly right off my back bumper. It was quite stressful and I had to stay focused to defend, but I loved this fantastic battle in what was a magical atmosphere. Mathieu is a very clean competitor and it was nothing but a pleasure!”