Revved up and ready to fight: Toyota on provisional Le Mans pole 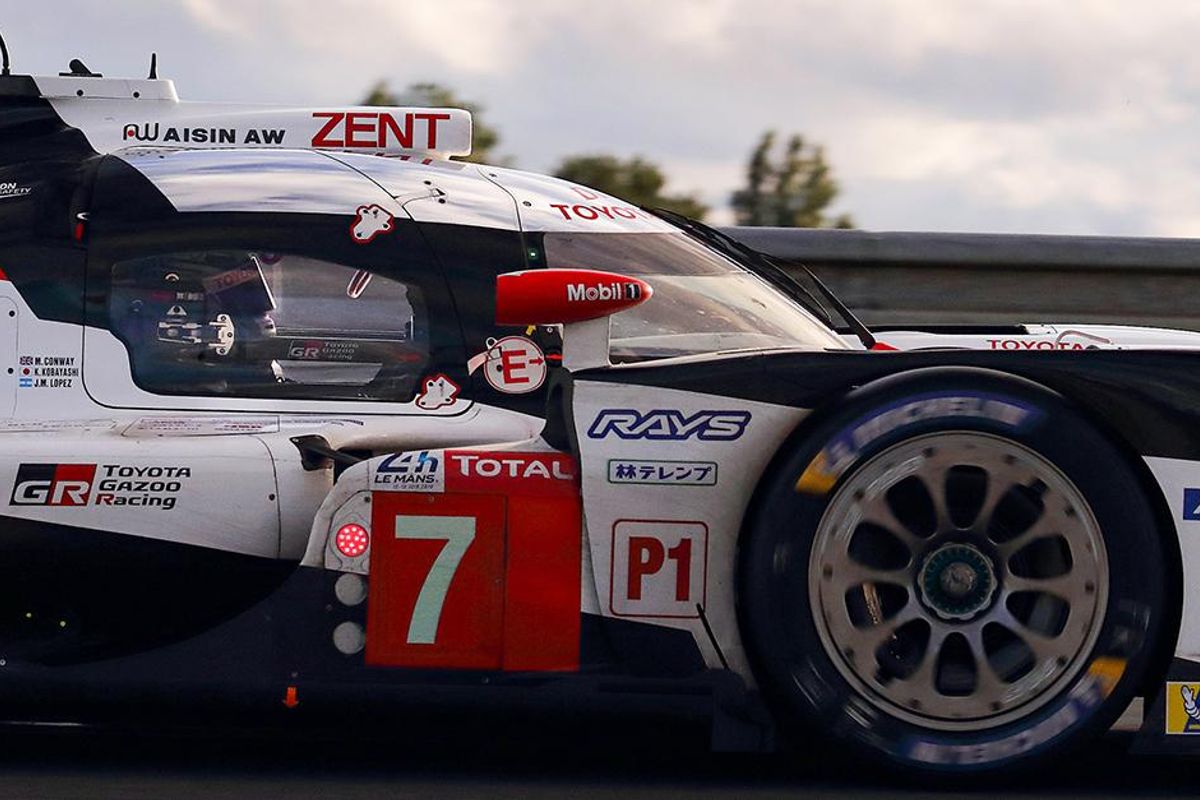 Kamui Kobayashi, who holds the record for the fastest-ever lap of Le Mans thanks to his 2017 pole position, ended first qualifying on top in the #7 TS050 HYBRID he shares with Mike Conway and José María López. He set a best lap of 3mins 17.161secs, 0.472secs clear of the #17 SMP Racing.

Although the Le Mans week officially began on Sunday with scrutineering, the team had to wait until Wednesday afternoon to turn its first laps on the 13.626km Circuit de la Sarthe. The only practice session of the event ran for four hours and began on a wet circuit following heavy afternoon rain.

The track dried throughout the first hour, allowing engineers and drivers to evaluate when to make the change from wet to hybrid intermediate tyres and then to slicks.

The TS050 HYBRIDs had completed a combined 220 laps during the 2 June test day when temperatures were much higher, so dry track time was valuable today to adjust set-ups to the cooler conditions which are also expected for the race. However, a red flag cost around 50 minutes during which time a heavy shower struck.

Despite changing weather and interruptions, the team prepared itself well for qualifying, with a total of 95 laps during free practice as the #7 set the pace.

When darkness fell for qualifying, the track was dry and both cars immediately headed out to record a first flying lap. Kamui went faster than any car at this stage last year but Kazuki faced traffic and then a full course yellow which prevented him setting a representative qualifying time on new tyres. Focus soon switched to race preparation rather than one-lap performance.

As the session reached the final 45 minutes, both TS050 HYBRIDs were involved in separate collisions with other cars. An LMP2 car drove into the path of Mike at the final chicane following a spin, causing damage to the front left of the #7 and requiring a 25-minute repair. Simultaneously, Sébastien and a GT car made contact; a small repair to the floor and a new front end cost a few minutes.

Late in the session, Fernando improved the #8 TS050 HYBRID’s lap time and took provisional fourth place while the #7 concluded its set-up and tyre evaluation programme.

Mike Conway (#7 TS050 HYBRID):
“It was a pity about the incident because the session had gone really well until then. I slowed down then saw headlights: I tried to pull out of the way but it was difficult to see the car and unfortunately we made contact. I’m sorry for the crew that they had a lot of extra work to do, but they did a great job to get the car back out at the end of the session.”

Kamui Kobayashi (#7 TS050 HYBRID):
“It wasn’t the best lap as I experienced quite a lot of traffic. It’s a pity not to have a clear lap but the car feels good and I think the time can be improved. Qualifying doesn’t mean anything in a 24-hour race so we are just preparing for the race as best we can. The track conditions today probably don’t match what we will face in the race so we still have preparation work to do.”

José María López (#7 TS050 HYBRID):
“It went well today. I managed to do a good amount of laps, getting used to the traffic and the conditions. It’s the first day so I am calm and not really looking at the times now; just trying to get comfortable with the car. Traffic this year seems more difficult but it’s the same for the other LMP1 cars and we just have to deal with it and stay patient; it’s a long race.”

Sébastien Buemi (#8 TS050 HYBRID):
“It was a very eventful session for us. Unfortunately we couldn’t do a real qualifying lap due to the traffic but we will have more opportunities on Thursday when hopefully we can challenge for a better position on the grid. The good thing is that we worked a lot on the set-up. We have some good information about set-up, particularly in the night, and the main target is to have a quick car in the race.”

Kazuki Nakajima (#8 TS050 HYBRID):
“The practice session was affected by the rain so it was not as productive as it could have been. In the night I attempted a qualifying lap on new tyres but I suffered in traffic. Qualifying is always a lottery here with the traffic and today we just didn’t have the luck. We will do our best to improve in the final two sessions. But we tried different set-ups in the night and learned a few things which will be useful.”

Fernando Alonso (#8 TS050 HYBRID):
“It went okay today. We worked on the set-up in practice during the afternoon but that session was affected by the weather, then in qualifying we were unlucky with traffic so we didn’t show our true pace. After that, we just concentrated on improving our car in race conditions. We were following our programme. On Thursday we have another chance to improve the set-up and we will try to get a better lap time.”