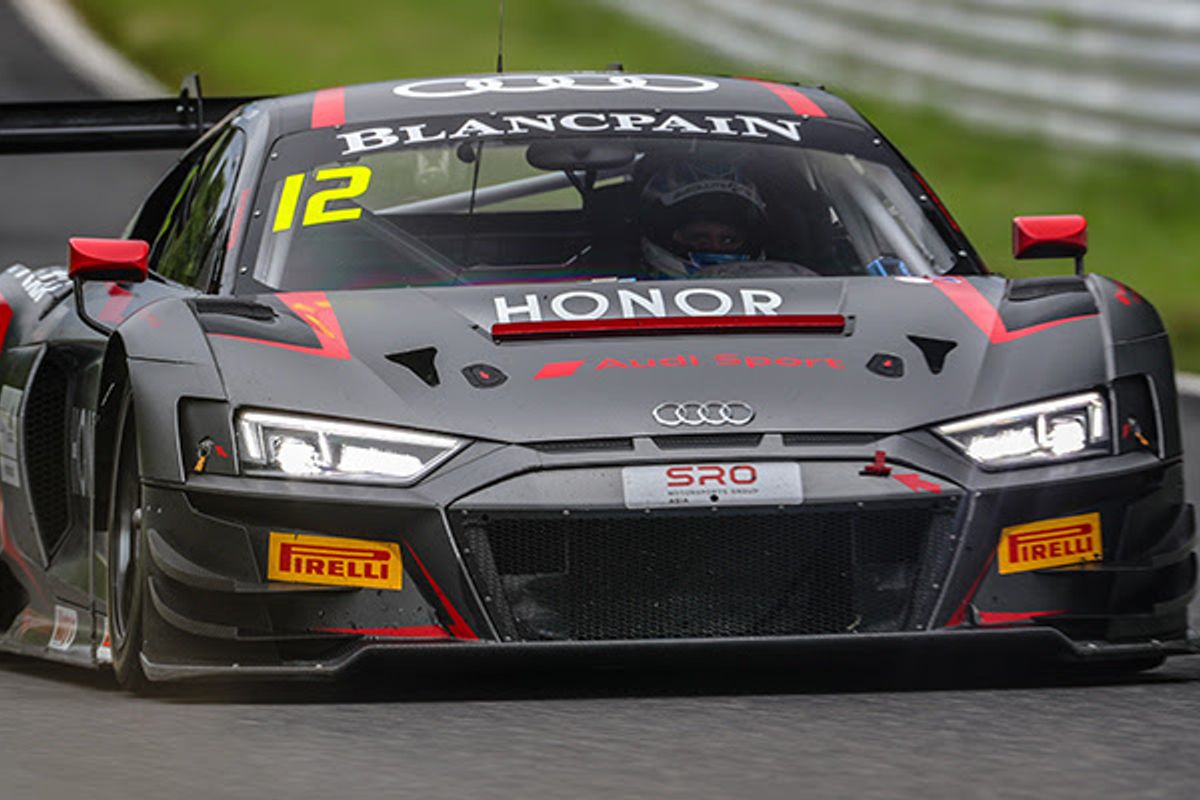 Rump’s #12 Audi starts the weekend’s first race up front after a late flying lap in a red flag-interrupted session helped the Estonian leapfrog Darryl O’Young, who was ultimately pushed down to third by Tanart Sathienthirakul.

The 15-minute session was peppered by three stoppages, which resulted in only nine drivers setting laps before the session restarted for a fourth time with five minutes remaining. O’Young held provisional pole at that point but was unable to respond to either the Audi or Sathienthirakul’s Absolute Racing Porsche, which fell just 0.029s short of denying Rump back-to-back pole positions at Suzuka.

Elsewhere, Ben Porter secured AMAC Motorsport’s best-ever qualifying result, as well as Am Cup pole, after setting his fastest lap before the final red flag. That was caused by championship leader MG Choi who emerged unscathed from an accident at 130R. Fortunately, his Mercedes-AMG will be repaired in time for this afternoon’s race.

GT3’s second 15-minute session came and went without incident, and ended with a familiar name on top of the timesheets.

Picariello secured his first pole of the season in Buriram last time out and followed it up with another here. The Belgian set a 2m01.233s on his first attempt after Absolute Racing’s Philip Hamprecht briefly held provisional pole.

A track limits infringement initially dropped fellow pole candidate Marco Holzer out of contention. However, the German regrouped before setting a faster time late in the session – 0.129s slower than Picariello’s – to vault Panther/AAS Motorsport’s Porsche on to the front row.

That came at the expense of Hamprecht who finished another 0.2s behind, while Singha Plan-B by Absolute Racing’s Kantasak Kusiri moved up to fourth with his final effort.

Kinoshita was first up but waited for others to set times before deposing Setiawan Santoso. The Team iRace.Win Mercedes-AMG would reduce its deficit before the finish but still ended up 0.8s adrift of the M4.

It was a similar story in Q2 where Jukuchou initially let others set their times. However, he was pegged back by Craft-Bamboo’s Jean-Marc Merlin who knocked the BMW back down to second before his Japanese rival responded definitively. One second covered the pair.

Ringo Chong backed up Santoso’s earlier good work by qualifying 0.3s adrift of Merlin and a second clear of Absolute Racing’s Anderson Tanoto He. Tony Fong and Alan Yeo rounded out the top-six.

Mercedes-AMG moved further clear of rivals Ferrari during America’s latest round at Sonoma last weekend. The German manufacturer now has 5375 points compared with the Italian marque’s 3677.

Ferrari has elected to change one of its scoring drivers in Asia where Andre Heimgartner is now nominated as its ‘Young Wolf’. Each manufacturer is permitted one change per region during the season.

LIVE STREAMING
Unrestricted live coverage of races one and two plus qualifying is available on www.gt-world-challenge-asia.com this weekend, while the same coverage will be streamed live on the championship’s Facebook page and SRO’s GT World Youtube channel.

Elsewhere, Chinese fans can watch both races with Mandarin commentary live on native streaming platforms such as YouKu, Huya and Douyu.