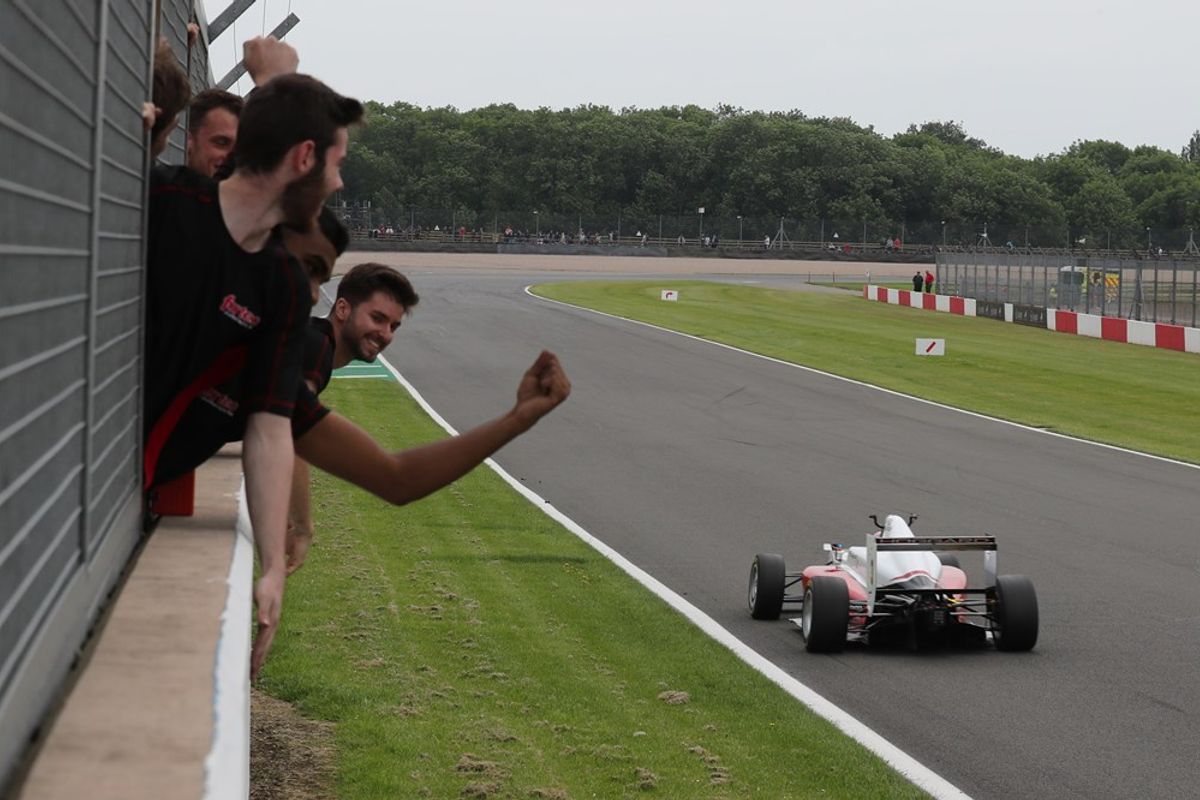 Lanan Racing's Josh Mason and Fortec Motorsports driver Johnathan Hoggard were the two winners after an eventful day of racing on the Donington Park Grand Prix circuit Sunday.
Mason took a controlled victory in thie morning's reverse grid contest, keeping a cool head under pressure and avoiding the drama around him, while Hoggard strengthened his title ambitions with a dominant win in the final race, adding to his victory secured in race one ySaturday.

Championship leader Clement Novalak didn't step on the podium all weekend, but three consistent results mean that he holds a lead of 28 points over Hoggard heading to the next round at Spa-Francorchamps.

Race two
Mason claimed victory in the morning's reverse grid contest at Donington Park, rising from third on the grid to the front after an early safety car period. He finished half a second clear of Double R's pole sitter Pavan Ravishankar, who fended off Fortec's Manuel Maldonado on the line.

In a dramatic race for the championship protagonists, Novalak in fourth capitalised after Ayrton Simmons and Hoggard were involved in incidents that left both without points from the race.

At the start, Ravishankar made a good start from pole, but it was Mason who made the better one and moved up to second at Redgate. Further behind a coming together between Jewiss and Frederick wiped the American out of the race, damaged Jewiss and forced Simmons through the gravel. Frederick's car was left stranded on the circuit, while Simmons and Jewiss resumed at the tail of the field with the Douglas Motorsport driver needing to pit to repair damage.

The safety car was deployed to recover Frederick's car, and when the race resumed at the start of lap four the drama continued as race leader Ravishankar locked up at Redgate, handing the lead to Mason who sliced up the inside and began to build an advantage.

As Mason built a lead of almost a second, Ravishankar was forced to fend off the attentions of Chris Dittmann Racing's Nazim Azman, another to make a good start and up to third place. Despite coming under pressure from behind, Ravishankar began to close the gap to the leader, with Mason's advantage falling to just 0.344s at the end of lap five, with Azman remaining in the scrap.

Mason kept it cool though and stretched his margin back to almost seven tenths by lap seven, though Maldonado found his way past Azman and into third after the Malaysian driver ran wide at the Fogarty Esses. There was more drama for Azman moments later, as he ran wide at the Old Hairpin and dropped several more places, with the main benefactor being Novalak who was now up to fourth.

Another talking point followed next time around, as Hoggard and Simmons, running in 11th and 12th places respectively, were embroiled in a scrap through the Craner Curves, with Hoggard ending up stranded in the gravel at the exit of the Old Hairpin and out of the race. Simmons was penalised by the Clerk of the Course with a five place penalty on the race three grid for this incident, but was disqualified from the results of race two after a separate drama with Kris Wright.

At the front, and despite all the drama, Mason was seemingly the coolest head and despite more pressure from Ravishankar, kept hold of the lead to take the win by just over half a second, one he'll count as his first proper British F3 win after his unique Silverstone triumph last year. Ravishankar held off a challenge across the line from Maldonado to claim second place by 0.135s, with the podium trio separated by less than seven tenths of a second, with Maldonado climbing from eighth to take the final place on the podium.

Novalak in fourth meanwhile enjoyed an extended championship lead thanks to the drama for his main rivals.
The top-three were presented with their trophies on the podium by BRDC Member Joe Osbourne.

Race two
Fortec Motorsports driver Hoggard claimed his second win of the weekend with a superb drive in the final race of the weekend.

Hoggard controlled the race from lights to flag to take the win four seconds clear of Douglas Motorsport's Ulysse De Pauw, with Sasakorn Chaimongkol third for Hillspeed. Championship leader Novalak claimed fourth, half a second behind the podium trio, with Azman taking an excellent fifth place for Chris Dittmann Racing.

Jewiss claimed sixth for Douglas Motorsport ahead of Double R's Neil Verhagen, with Ericsson, Maldonado and  Pedersen completing the top-10.

Pole sitter Hoggard made a good start to lead the pack to Redgate with De Pauw holding second and Novalak climbing to third, taking advantage of an issue for third place starter Kaylen Frederick who pitted at the end of lap one.

Chaimongkol though, despite battling with the flu, was in a fired up mood. Starting sixth he was up to fourth mid way round the opening lap and then found a way past the championship leader. Hoggard held a lead of almost a second at the end of the first lap, with Chaimongkol looking to challenge the Belgian driver just ahead.

Hoggard maintained the margin on lap two, but then began to build an advantage, extending the lead to 1.5 seconds by the halfway point. From there he began operating a few tenths quicker than De Pauw, claiming his fourth win of the year by just over four seconds.

The battle was on behind him though, with De Pauw heading a string of cars never more than a few tenths of a second away from each other.  The Douglas Motorsport driver claimed his first British F3 podium by just eight tenths over Chaimongkol, with the Thai driver claiming his first podium of the year for Hillspeed. Novalak in turn was just a few car lengths away from the podium, with Azman keeping a watching brief throughout and finishing less than half a second behind the Carlin driver, having started eighth on the grid.

Reigning F4 champion Jewiss was another in the train, finishing less than four tenths of a second behind Jewiss and 0.411s clear of Verhagen. Teammate Ericsson in eighth was six seconds further back, with Fortec's Maldonado and Douglas Motorsport's Pedersen around a second behind and completing the top-10.

While there were good races for championship protagonists Hoggard and Novalak, Simmons' hopes were dented again after suffering an issue on lap three while in running in seventh place, having started in 10th.

Race three winner Johnathan Hoggard
"It's been a really good weekend apart from race two - not finishing there was quite disappointing and it was good points thrown away, but there was nothing I could really do about it. We just had to control what we could control and have a good race three like we did in race one, so this makes up for it.

"It was quite cold on track this time so I struggled a little with getting the heat in the tyres on the formation lap so it was a case of building it up on lap one and lap two and then we managed to get a pretty decent gap.

"It's really close at the top in the championship, race two didn't help with me not scoring points. It always seems to be like two steps forward and one step back, so it's always quite frustrating thinking about what is going on in the championship, but we've come away with quite a few race wins so I think that's a big positive. With so many points available for a win it helps reduce the gap.

"I'm really looking forward to Spa now and really enjoy it. We had a good test day in the winter and I loved it, so I'm hoping for a good weekend. Two wins this weekend and hopefully more of the same at Spa!"

Race two winner Josh Mason
"Crossing that line in P1 felt amazing. I had a lot of pressure throughout the race from Pavan behind me, but I had to calm down and control it, which I did. But P1, there's not much more I can say after that!

"It was weird not to have anything in front of me! I felt weird but I knew I just had to hit all my apex points and I would be fine.

"This will definitely boost my confidence but there is still work to be done. This is a big factor for me and definitely picks me up. I need to keep focusing on developing myself as a better driver but this win definitely helps me a lot. From last year to now, Lanan have worked so hard to get me where I am now, they're still working hard to get me even better but I appreciate so much what they've done for me this past year and a half."