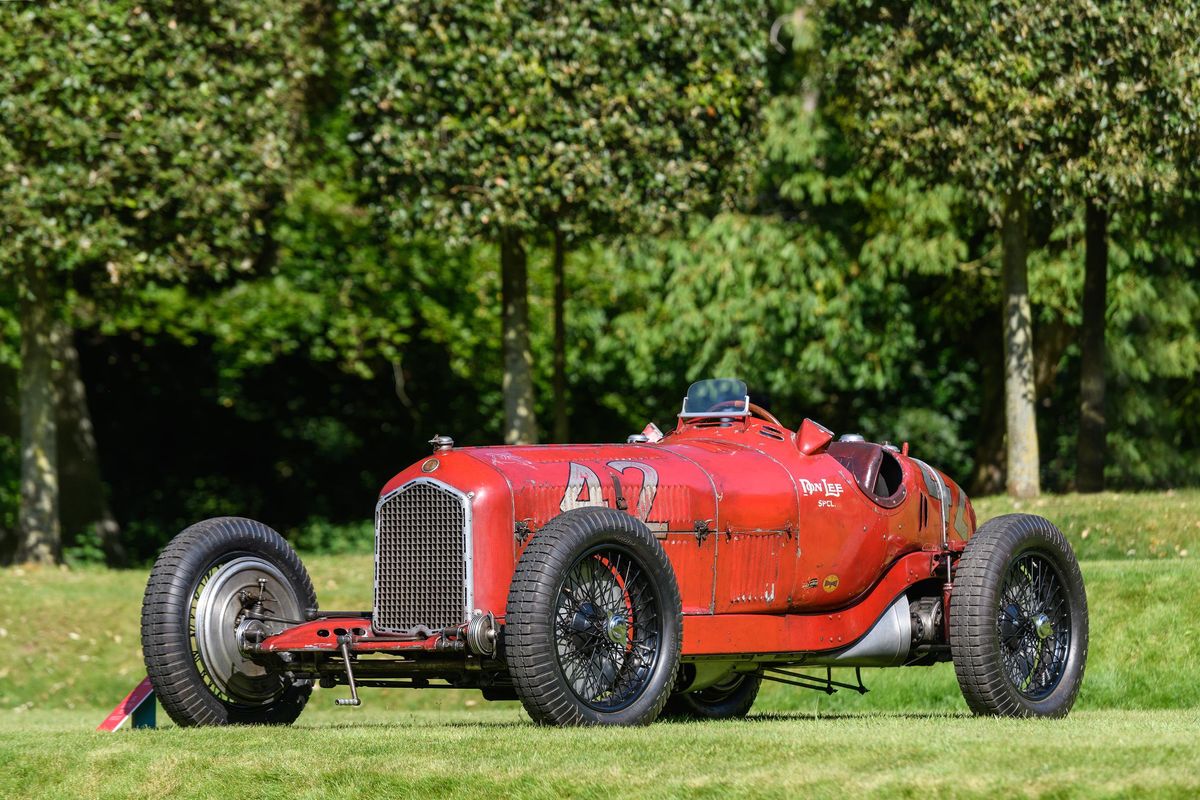 Heveningham Concours has announced the winners in the motorsport and aviation concours at this year’s event which took place on Saturday 22nd and Sunday 23rd June at the 5,000-acre Georgian estate in the heart of the glorious Suffolk countryside.

1934 Alfa Romeo Tipo B Monoposto – winner, pre-war class
Engine: Front-mounted 2905cc supercharged straight-eight; 255bhp
Transmission: Three-speed manual; rear-wheel drive
The car better known as the P3 was not ready for the start of the 1932 Grand Prix season, but it arrived just in time to win all three championship races. The superiority of the lightweight Alfa was best demonstrated at the last of those, the German GP. Championship regulations called for a five-hour contest but organisers from the Automobilclub von Deutschland needlessly decided that the race would finish after 25 laps of the Nürburgring, calculating that no driver could possibly complete that many in under five hours. The P3 of Rudolf Caracciola romped home in 4:47, with its two sister cars just behind. This P3 was bought from Alfa Romeo by the Spanish privateer Count José Padierna de Villapadierna, who came into a fortune at 19 and managed to spend it many times over. He enjoyed modest success with the car, but by the late 1930s it had left the Count’s stable and travelled across the Atlantic to the USA. The car went on to make several appearances at the Indianapolis 500, racing as the ‘Don Lee Special’ in memory of the radio mogul while in the ownership of his son. Following a sympathetic restoration it still wears its original Don Lee paintwork, and has been shown at events including the Pebble Beach Concours d’Elegance.

1967 Ferrari 275 GTB/4 – winner, post-war class
Engine: Front-mounted 3286cc V12; 300bhp
Transmission: Five-speed manual; rear-wheel drive
There was plenty to see at the 1964 Paris Motor Show, including the new Porsche 901, the eye-popping Alfa Romeo Canguro concept, and a slinky, Pininfarina-styled Mercedes-Benz 230 SL Coupé that sadly never made it to production. Many visitors, though, made a beeline for the Ferrari stand to scrutinise the 275 GTB. As the successor to the 250 GTO, the car had a lot to live up to, but nobody who saw it in Paris could have come away disappointed. The bodywork, designed by Pininfarina and crafted by Scaglietti, was muscular but refined, and the same qualities were evident from behind the wheel. The ultimate iteration of the model was the 275 GTB/4, with a four-cam V12 good for 300bhp – 20bhp more than the original twin-cam 275 GTB engine could produce. Chassis 09897, a star of the recent Ferrari exhibition at the Design Museum, is one of 330 four-cam cars built. It was originally owned by Maranello Concessionaires, the UK Ferrari importer run by former military man Ronnie Hoare. ‘The Colonel’ ordered 09897 in his favoured Cambridge blue, a colour known to Scaglietti as Azzurro La Plata, and the car was restored by DK Engineering in the same shade last year.

1993 Jaguar XJ220S – winner, supercar class
Engine: mid-mounted 3498cc twin-turbo V6; 680bhp
Transmission: five-speed manual; rear-wheel drive
On 21 June 1992, Jaguar rolled the XJ220, already the world’s fastest production car, onto the Nardò test track in Italy, removed the catalytic converters and instructed F1 driver Martin Brundle to put his foot to the floor. A short time later the car, described by journalist Gavin Green as resembling a ‘low-flying jet’, hit 217.1mph. Amazingly, it was still nowhere near the limit of its potential…Tom Walkinshaw Racing, which had been involved in the development and construction of the XJ220, created the XJ220C for competition, and chassis 002, driven by John Nielsen, David Brabham and David Coulthard, won the GT class at Le Mans in 1993 before being unfairly litigated off the podium. Around the same time, TWR imbued five road cars with Le Mans-type performance. Each XJ220S was fitted with carbonfibre bodywork and aerodynamic aids including a giant rear wing. All non-essential equipment was removed from the interior to save a few more kilos. The standard twin-turbo V6 engine, meanwhile, was tuned to make 680bhp, allowing a top speed of 228mph. Only three of those five cars remain exactly as TWR intended, and chassis 220779, finished in a vivid shade of orange, is one of them. Formerly part of a US collection, the car was recently repatriated by the current owner.

1931 Bentley 8 Litre Roadster by Corsica – winner, Bentley Trophy
Engine: front-mounted 7983cc straight-six; 340bhp
Transmission: four-speed manual; rear-wheel drive
When Bentley Motors went into receivership in 1931, production at the famous Cricklewood factory ground to a halt, but development of the gargantuan 8 Litre, introduced in 1930, did not. Forrest Lycett saw to that. Lycett, a fanatical motorist who routinely drove 300 miles in a day, was determined that his 8 Litre should be the finest car on Britain’s roads, and he enlisted the help of Bentley whisperer LC McKenzie to make it so. The pair worked on the car up until the outbreak of World War Two, incrementally reducing weight and increasing power. Coachbuilder Corsica eventually fashioned a rakish two-seater roadster body from Duralumin, Lycett having managed to get hold of the material through his contacts in the RAF; and McKenzie managed to coax an astonishing 340bhp from the big straight-six, 120bhp more than standard. Lycett never let tinkering get in the way of a good drive, though. He criss-crossed the country in the 8 Litre and regularly unleashed it at hillclimbs and on the racetrack, where its full potential was revealed. On 29 August 1939 Lycett’s magnificent machine set several Class B international speed records at Brooklands, notably covering the flying kilometre at an outrageous 141.13mph, and the car, unaltered since that day, remains jaw-dropping in full flight.

1939 Westland Lysander TT MkIII  - winner, Hanna Aviation Trophy
Engine: Bristol Mercury XX nine-cylinder radial; 870hp
During World War Two this Lysander was used by the 613, 224 and 4 Squadrons, and it remained unscathed until 26 April 1942, when it suffered accident damage to a wing. It was dispatched to Fairfield Aviation in Watford for repairs, and while it was there the decision was made to turn it into a target tug for use in Canada. After being shipped across the Atlantic, the plane reached Mossbank, Sasketchewan, where it was put to work in service of the Commonwealth Air Training Plan, a large-scale aircrew training programme organised by the UK, Canada, Australia and New Zealand. The Lysander had apparently outlived its usefulness by late 1944, and in 1946 it was bought by a local farmer, who unfortunately made no attempt to preserve it. The plane sat on his land, slowly deteriorating, until 1972, when it was saved from a sorry fate by the vintage aircraft enthusiast Harry Whereatt. Eventually, in 2003, it found its way home to the UK, and the Aircraft Restoration Company began to bring it back to life. The process, which required the efforts of full-time and volunteer engineers, must at times have felt interminable, but in August last year the Bristol Mercury engine burst into life, and the Lysander flew for the first time in over seven decades.

Horsepower Hill was won by a Ferrari 488 Pista which made the sprint up the main drive in 10.54 seconds.

In the aviation concours, the judges (Chair of judging panel Vic Norman, John Romain and Paul Bonhomme) awarded the Hanna Aviation Trophy to the 1939 Westland Lysander TT MKIII owned by the Aircraft Restoration Company with special mention going to the 1941 Curtiss P40-C Warhawk.

Ahead of the concours, The Heveningham Tour saw around 50 cars drive through the scenic lanes of Suffolk and taking in, amongst others, Westleton, Dunwich and Thorpeness, before arriving at the former RAF/USAF Bentwaters air base, which was a strategic nuclear-armed base for the Americans during the Cold War. Cars toured the former nuclear bomb stores under ‘armed’ guard and enjoyed a ‘Putin’s Picnic’ adjacent to the Star Wars building at Bentwaters before taking to the main runway with some of the super and hypercars enjoying donuts at the end. A black-tie dinner for owners was held at Heveningham Hall on Friday night followed by a Summer party with live music and entertainment on Saturday evening.

A total of 60 stunning cars were exhibited over the two days on the Kim Wilkie-designed grass terraces to the rear of the Grade I listed Palladian mansion, including cars from the very dawn of motoring, such as an 1898 Panhard et Lavassor M2F, up to the modern day with cars such as a 2019 Ferrari Monza SP1 and a 2019 Bugatti Chiron Sport. Williams F1 Heritage also sent four Formula One cars, including a Williams-Mercedes FW41 car driven in the 2018 season by Lance Stroll and Sergey Sirotkin, and was immediately identifiable on the track thanks to its distinctive Martini livery.

Commenting on this year’s concours, Max Hunt, chairman of the judging panel, said: “With summer finally arriving just in time, this year’s event has been our most successful to date. A huge thank you to all our owners and, of course, visitors who help to raise lots of money for local charities and provide a full scholarship for a student to undertake the post-graduate MA Intelligent Mobility at the Royal College of Art.”

Heveningham Concours takes place at the same time as the long-standing Country Fair which itself attracts around 20,000 people to the estate each year.