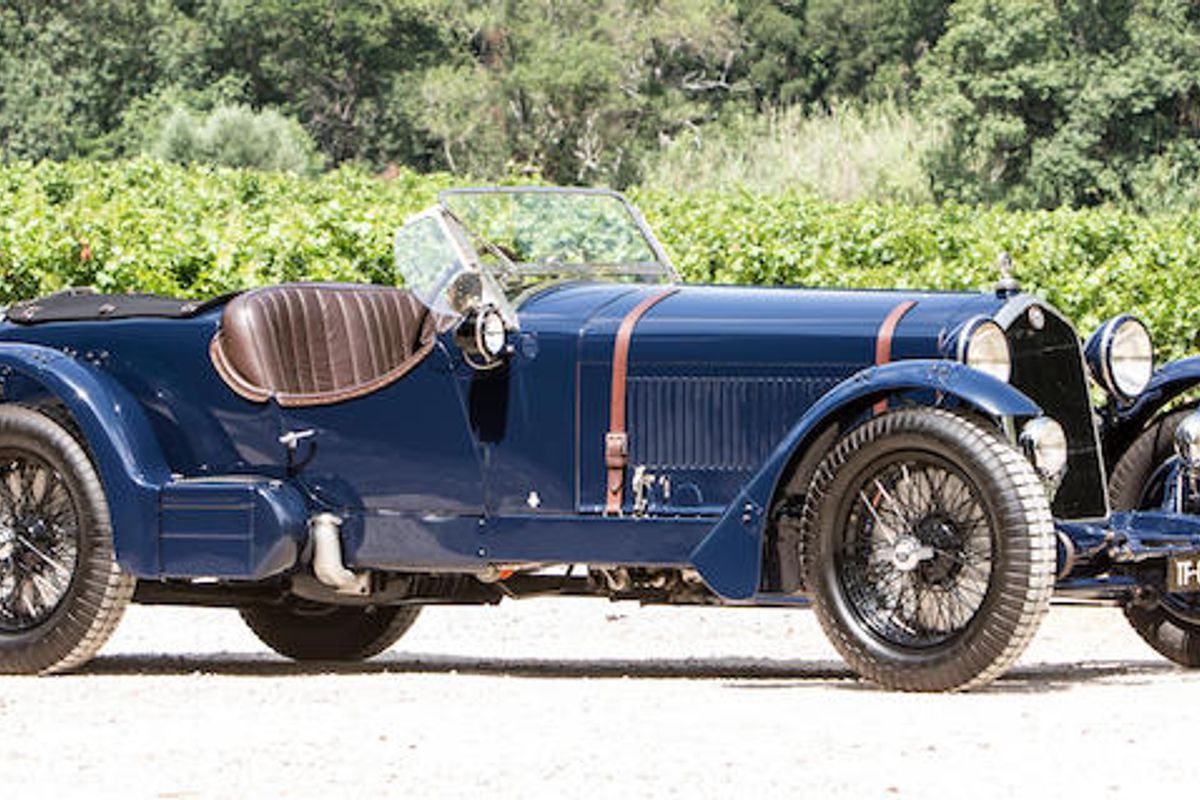 'As a natural evolution from the six-cylinder 1750, Vittorio Jano designed in 1931 a brilliant eight-cylinder... The car was equipped with a Roots-type supercharger of the classical type... and the model had emerged which would win the great Mille Miglia several times...' - Luigi Fusi, Enzo Ferrari, Griffith Borgeson, Le Alfa Romeo di Vittorio Jano, Autocritica, 1982.

Intended to keep Alfa Romeo at the forefront of international motor racing, the company's first eight-cylinder road car, the 8C 2300, was introduced in 1931. Its designer Vittorio Jano was one of the first automotive engineers specifically to produce high-performance cars tailor-made for sustained full-throttle running on high-speed roads. Such characteristics made the 8C Alfa ideally suited to both the Mille Miglia road race and, of course, the Le Mans 24-Hour endurance classic. In fact, the Alfa Romeo 8C 2300 won Le Mans no fewer than four times (1931-1934).

The car's heart is its supercharged, straight-eight, twin-overhead-camshaft engine, which Jano arranged in effect as two four-cylinder units in tandem with cam-drive gears amidships. Bore and stroke were 66x88mm, for 2,336cc, while the twin-lobe Roots-type supercharger was driven at 1.33-times crankshaft speed. The Corto (short) chassis had a wheelbase of 2.75 metres, and the Lungo (long) version one of 3.1 metres. Boasting a four-speed manual gearbox and powerful drum brakes all round, these Alfa Romeos were genuine 100mph cars, reliably producing over 140 horsepower at 5,000rpm.

1934 was the last year of manufacture of the Alfa Romeo 8C 2300. Other long-chassis cars with coachbuilt bodywork within these last 20 or 30 chassis numbers were completed by August 1934 at the latest but this car, '231122', was not sold until June 1935. One can speculate on reasons for that, including changes to the specification by the buyer or a lack of funds to finish the project, but the reason will remain a mystery.

The first confirmed part of this 8C's history is its registration on 12th June 1935 as 'CO 9964' in Como to Gianfranco Peduzzi, when the body was described as a cabriolet. Mr Peduzzi kept the car for almost three years, after which it was sold to one Oreste Peverelli, still in Como, on 8th June 1938. The car then moved to Milan where a new registration ('MI 66731') was issued on 22nd October 1938 to one Renaldo Cravedi. The Milan registration record lists the 8C as 'berlina', or a closed car, but it is believed that this may be incorrect. It also lists a subsequent owner, Corrado Legame, who declared the car 'demolita' in 1941. That does not mean that the car was demolished, merely that Legame, who may have been an associate of Cravedi, declared that he no longer owned it.

In the late 1930s, racing driver Felice Bonetto was living in Brussels and importing various Italian sports cars – notably Alfa Romeos and Maseratis – into Belgium for resale either in the Benelux countries or in the UK. Cars that went via this route included at least two 8C 2300s that were registered to Crevidi (and two to Bonetto). It seems likely that this car went to Belgium via Bonetto just before the war, since the alternative of its being taken there by the occupying forces is unlikely since this chassis number does not appear on the US armed forces' listing of 8C 2300s taken from Italy by the Germans.

It seems inconceivable that either Cravedi or Bonetto would have paid for a new body on '2311222' in the late 1930s since it was an old sports car and, as dealers, they would not have wanted to spend the money. Since the car was a cabriolet when it was found after the war by two young Belgian enthusiasts in Antwerp, it seems probable that it was always a cabriolet, although the body in 1938 may well have been the car's second since the styling seems more 'modern' than 1934 or 1935. On the other hand, it is possible that the original body was modified to look more 'modern'. One of the two young Belgians made two sketches of the car showing the same body that it had when photographed in New York in 1968. It is clear that the body was built by Pinin Farina of Turin, with some nice touches including the slim slot in the tail for the spare wheel.

In the late 1950s the car was sold by Daniel Bockstael via an advertisement in Motor Trend magazine and bought by New York enthusiast Jim MacAllister, who owned it for many years. A regular competitor at VSCCA events in a Maserati A6GCS, MacAllister eventually decided to part with the Alfa, which was offered for sale by Stanley Nowack. It then moved to Switzerland in 1978 to Joost Wildbolz via the late Massimo Colombo. The car suffered some damage, presumably in transit, because photographs show a dent in the tail and scratches on the front wing.

Joost Wildbolz decided to make a new body for the Alfa and the Farina body passed to the late Pierre LeGrand, although its current location is unknown. The new body was a Spider in the Touring style. Unfortunately, at that time, no photographs existed of the handful of Spiders that Touring built in period on the long chassis, so the new body was not exactly the same as the pre-war design. In the mid-1980s, the car was back on the road and Michel Zumbrunn took a set of studio photographs of it that were used to illustrate a story about the 8C 2300 in both Automobiles Classiques and AutoIn Vogue. Joost completed the Mille Miglia straight after the rebuild without a problem, only for the differential to fail 300 metres after the finish!

By 1989 Al Guggisberg owned the Alfa and used it regularly on the road, describing it as 'the best, fastest and easiest to drive 8C I ever owned'. The car's next owner was Heinrich Kampfer, who competed in numerous events over the following seasons before passing it, via Al Guggisberg and Nick Harley, to Italo Perottori in Italy. The 8C finally arrived in the UK in 1997 and was given the registration 'TFO 544', which it retains.

Its next owner was the late Peter Agg, boss of Trojan and a noted car collector, who rallied the 8C extensively. Unfortunately, he was caught in a sandstorm in Morocco that led to sand getting into the engine, necessitating a major engine rebuild. At the same time, Agg made some minor modifications to the body and had a soft-top fabricated.

In 2001, the car was sold to John Ridings Lee of Dallas, Texas, who had some work done in the Netherlands prior to shipment. He became aware that a British-made replica of the Touring Le Mans body, which had been made for '2311203' to replace that car's wonderful closed Viotti body, was available. Arturo Keller had bought '2311203' with both bodies and returned the Viotti body to the chassis. John Ridings Lee then purchased the replica Touring body in 2004. Replacing the two-seater body with the replica Touring Le Mans-style four-seater was undertaken by Bob Smith Coachworks in Gainesville, Texas. That replica body, currently on '2311222', was built in the UK by Rod Jolley Coachbuilding Ltd. With the owner's permission, Rod had been able to study the original Touring body on chassis number '2311204' and copy that for fitting to '2311203'.

In late 2007, '2311222' returned to the UK having been purchased by the current vendor. Classic Performance Engineering then carried out various works during 2008 prior to the car being shipped to South Africa for a rally later that year. The Alfa was photographed for Classic Car Africa magazine and appeared in their issue of February/March 2009.

Substantial work, as detailed in the history file, was then carried out back in the UK by Neil Twyman, including relocating the accelerator pedal to the right of the brake, and fitting a 'dog' gearbox supplied by Jim Stokes. The car then went to the USA in 2010 to participate in Tom Price's 8C Alfa tour, in which it ran perfectly throughout.

'2311222' was raced at Donington Park on 30th April 2011 and then returned to Neil Twyman for further work. In late 2011/early 2012 a complete 'last nut and bolt' engine rebuild was completed by Neil Twyman with a new crankshaft, bearings, supercharger drive gears, and other parts supplied by Jim Stokes Workshops Ltd at a total cost of around £60,000. The engine was enlarged to 2.6 litres at the same time. An email printout on file confirms the (dynamometer measured) maximum power output of 143bhp at 8-9psi boost pressure, and states that the dynamometer operator, an engineer with considerable experience of testing 8C Alfa engines, reckoned this was one of the best that he had encountered. All the related invoices are on file.

Thereafter, the car has only been used for road events and has run without problems, covering only a minimal mileage as evidenced by the MoT certificates on file. The Alfa has recently had its annual oil change and is 'on the button', ready for the fortunate next owner to enjoy.

Bonhams would like to thank Simon Moore, author of The Legendary 2.3: Alfa Romeo 8C2300 for his assistance with the preparation of this description.