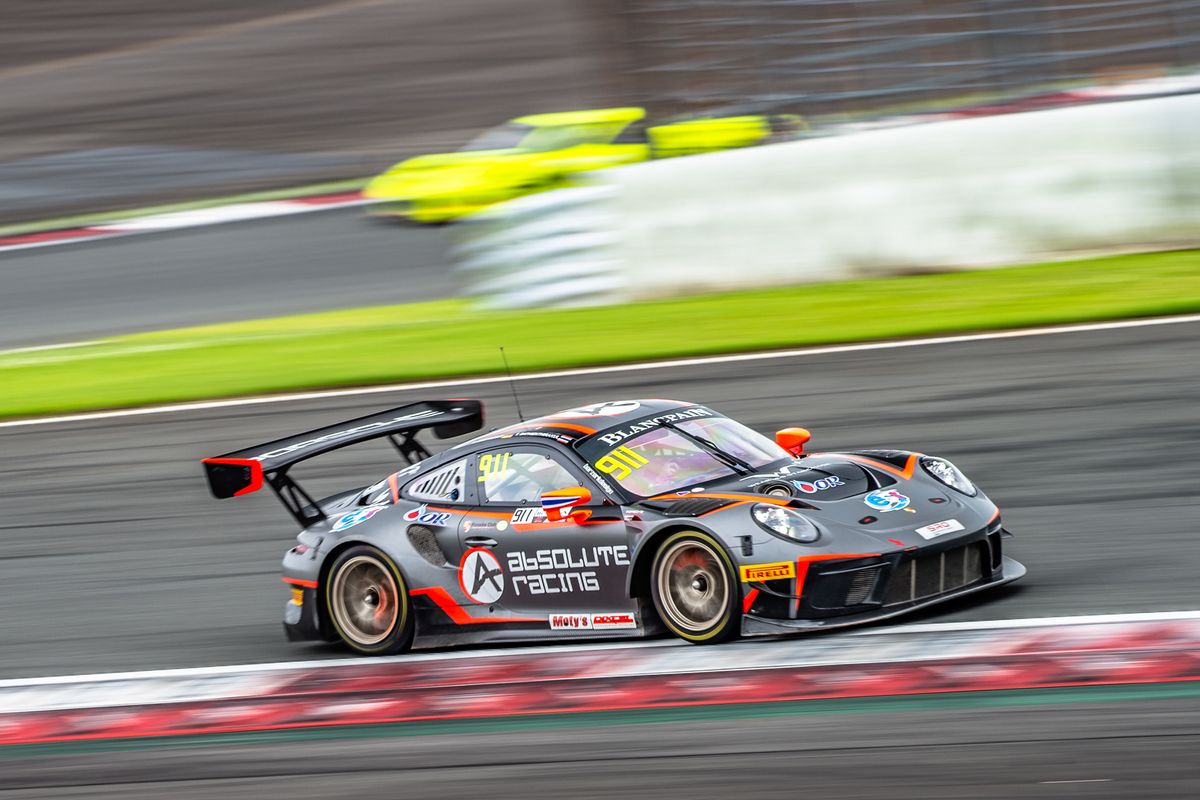 and stay in the lead at Fuji

Sathienthirakul’s 1m41.467s proved more than sufficient to see off the opposition by half second on Saturday’s first 15-minute qualifying session. In race one, the Thai driver lost the lead in the opening lap, but regained it several laps later before handing the car to his teammate. With a 15-second Pit-Stop Success Penalty, Hamprecht left the pitlane in fourth, and he remained in the same position to the flag.

After being overtaken by an opponent on the opening lap, Yuan Bo quickly reclaimed eighth on the second tour of the circuit. The #912 Absolute Racing Porsche 911 GT3 R lost a position on the pit stop, but Leo Ye Hongli managed to get back up to eighth to finish race one, sixth in Silver Cup.

#918 Panther/AAS Motorsport entry’s weekend didn’t kick off on the right foot. Starting from eleventh on the grid, Vutthikorn Inthraphuvasak, who teamed up again with Alexandre Imperatori, retired on lap 3 from eighth with severe damages.

The second race of the weekend took place on the Sunday. Imperatori started ninth and moved into top four in the opening stint. Inthraphuvasak then took #918 Panther/AAS Motorsport entry to first overall. Unfortunately a late safety-car period left the Thai gentleman driver at the mercy of a Pro driver in the last couple of laps. Inthraphuvasak defended his position bravely, but in the end he had to settle for second. He still managed to win in the Pro/Am class.

Starting from eighth on the grid, Hamprecht picked up a puncture early in the race. The championship leader car emerged from the pit lane near the rear of the GT3 field in 23rd. Both Hamprecht and partner Sathienthirakul fought well to recover, and the safety-car period towards the end helped the #911 Porsche 911 GT3 R pair. The Thai-German duo crossed the line in eighth, fourth in Silver Cup.

Yuan Bo and Leo Ye Hongli lined up from P11 on the grid. They looked set to secure a top five finish before disaster struck on lap 28 when the Chinese drivers got hit with a drive-through penalty for a multiple track limits infringement. They took the car home at the foot of Mount Fuji in 13th, sixth in Silver Cup.

Sathienthirakul and Hamprecht remain first in the GT3 Overall and Silver Cup standings as Inthraphuvasak sits first in the Pro/Am class standings with four races still to go.

The weekend’s results have helped to keep Absolute Racing at the top of the Teams’ standings.  The battle for the Blancpain GT World Challenge Asia title resumes next month at South Korea’s Korea International Circuit, Yeongam, from August 2 to 4.

Fabien Fior (Team Director): “Our only target has to be the overall victory but this weekend, all things considered, we can be pleased with the results. We had some setbacks with Saturday’s Panther/AAS Motorsport DNF and today’s #911 puncture and #912 penalty, but our drivers scored important points for our championship positions. We are leaving Fuji at the top of the Teams, GT3 Overall, GT3 Silver Cup and GT3 Pro/Am Cup standings. We now travel over to Korea for what we hope will be another good weekend."

Tanart Sathienthirakul (#911 Driver): “It was a tough weekend for us. I managed to put on pole in the first race, but we couldn’t deliver the job even if we had finished close to the podium. In the second race we had an accident in the first lap, and we got a puncture. We had to come in to change the tire, and it was bad for us as we lost some time. We were bit luck with the safety-car in the end and we recovered a few places. Overall I am happy with the pace, but the result here could have been better.”

Yuan Bo (#912 Driver): “We had a bad luck this weekend, as we could have started from the front row in race one. Unfortunately my best lap time was deleted due to a track limits infringement. This situation made our first race particularly difficult. In race two we had the opportunity to challenge for the overall podium positions, but we received a drive-through penalty for multiple track limits infringements. The last infraction wasn’t my fault as the Ferrari pushed me out in T1. We didn’t have the chance to do much better. While disappointing, I know the team and I are ready to fight back in Korean.”

Alexandre Imperatori (#918 Driver): “Once again we had a good performance over the weekend. Traffic in my Qualifying meant I couldn’t maximize our pace and we had to start 9th but we made ground in the opening stint and Vutthikorn drove brilliantly to get the car to P1 and then resisting pressure from silver drivers. We came up a lap short and had to settle for second overall but the Pro/Am win. Thanks to the team for the hard work and fixing the car for race two. It makes up a bit for Saturday when we retired. We are firmly in the hunt for the championship and looking forward to Korea.”