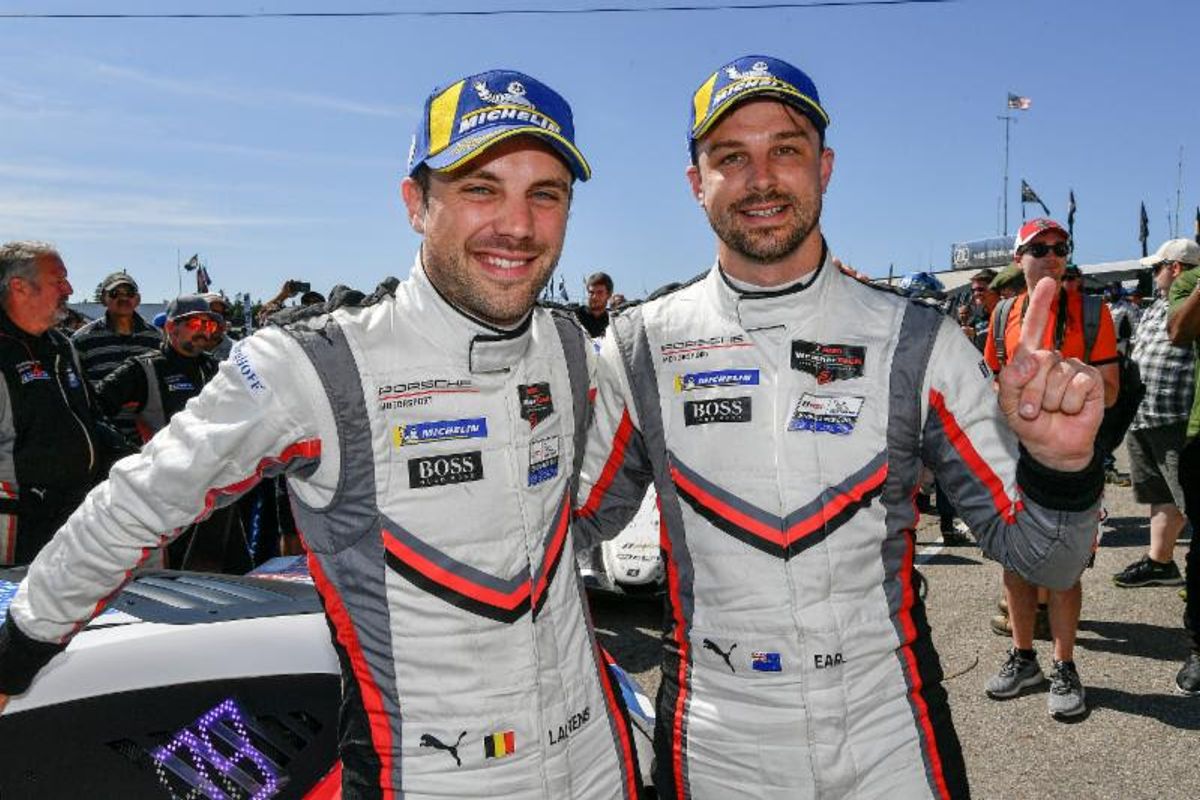 It doesn’t matter which side of the border they’re on, there is no stopping Porsche right now in the IMSA WeatherTech SportsCar Championship.

The five straight wins is a record in GTLM, besting a string of four straight from Corvette Racing (2014) and Ford Chip Ganassi Racing (2018). Porsche also won four consecutive races in 2015.

It was the third win of the season for Bamber and Vanthoor, following wins at the Long Beach street circuit in April and Mid-Ohio Sports Car Course in May. The team’s No. 911 Porsche 911 RSR and drivers Nick Tandy and Patrick Pilet won the Mobil 1 Twelve Hours of Sebring Presented by Advance Auto Parts in March and the Sahlen’s Six Hours of The Glen last weekend.

"Sometimes even to our frustration, until the manufacturer championship is won, they don’t care if they win or we win,” said Vanthoor of the Porsche team. “That’s the reality. That’s the main goal for Porsche even though we’re race drivers, we want to win ourselves. We want to beat each other to be even more exciting during the season. We’re obviously fighting for the same thing, but at the moment we work together and the main thing is a Porsche wins.”

It was a two-car battle for much of the race between the No. 912 Porsche and No. 24 BMW Team RLL BMW M8 GTE of Jesse Krohn and John Edwards. Krohn started from the pole and led the race’s opening 45 laps before losing the lead to Bamber on a series of green flag pit stops. The only other car to lead a lap was the third-place finishing No. 911 of Nick Tandy and Patrick Pilet which led one lap on that same series of stops. The No. 912 led a of class-high 69 laps.

Edwards had one shot at Bamber on a late-race restart with 15 minutes remaining but finished 1.208 seconds back in second in his No. 24 BMW. The No. 911 Porsche finished third, 2.177 seconds back.

“We’re going to keep pushing, it’s a tight championship right now, but I think we’re carrying some momentum,” said Bamber. “The BMW set a super, super quick pace so hats off to them. They were solid all day long. It was a really, really tough race. Hats off to the team, it was mainly strategy and quick pit stops. I think it’s something special to say Porsche making five in a row, that’s a little bit of history there.”

With the win Bamber and Vanthoor vaulted to the top of the GTLM standings, jumping their teammates to take a four-point lead, 186-182. Running third in points, but losing significant ground following a seventh-place finish is the defending class champion No. 3 Corvette Racing Corvette C7.R of Antonio Garcia and Jan Magnussen.

Auberlen Closes to Within One of All-Time IMSA Win Record Following Victory with Foley, Turner Motorsport BMW at CTMP
Bill Auberlen is one win closer to making IMSA history.

Auberlen halved that gap on Sunday with a victory in the IMSA WeatherTech SportsCar Championship GT Daytona (GTD) class co-driving with Robby Foley in the No. 96 Turner Motorsport BMW M6 GT3.

Foley qualified the car on pole and from the drop of the green flag, the writing was on the wall that it was Turner’s day. He and Auberlen would end up leading 107 of the race’s 113 laps and with both essentially controlling the pace during their stints. Even after a restart before the final 15 minutes of the race, Auberlen didn’t experience any pressure and was able to glide to Turner’s first victory since Watkins Glen last year.

“That was a big part of my focus for so long, that I think it sort of took over my mind-frame on how to win races,” said Auberlen of his win count. “Now we’ve put that aside. Will [Turner, team owner] said let’s go for the championship. Now that we switched gears, we’re on a roll here. We should have, could have, would have, won a lot of races this year. But we didn’t. The luck seems to be going our way a little bit now.

“I’ll tell you what makes it a lot easier is when you have a teammate who qualifies it on the pole and gives it to you with the lead. It’s so easy. Robby is the up-and-coming guy that’s going to be somebody to reckon with. He’s going to be taking somebody’s seat here soon. He’s so good, so keep your eyes on Robby.”

While it was Auberlen’s 59th IMSA win, Sunday delivered Foley’s first career victory in IMSA’s top-tier series. The pair are also now in a three-way tie for third place in the championship standings after Sunday’s win and a runner-up finish last week at the Sahlen’s Six Hours of The Glen.

“It’s nice to start at the front,” said Foley. “It’s a good feeling because you can kind of dictate what happens to an extent. You dictate the pace. The Turner guys gave us an amazing car. They’ve been flawless all year. It’s been tough to have a fast car at every track and not have the results to show it. These guys deserve this today. For me, my first win? Yeah, it’s been a while since I won a race, so it feels nice. I’d been on a bit of a bad luck streak. To get number one is good. Once the first one happens, they get rolling, so we’ll see.”

Trent Hindman and Mario Farnbacher collected their third consecutive podium, finishing second, and expanded their championship lead to 19 points, 151-132, over the No. 12 AIM Vasser Sullivan Lexus RC F GT3 duo of Frank Montecalvo and Townsend Bell. Bell and Montecalvo finished third on Sunday to round out the GTD podium.

The next round of the IMSA WeatherTech Sportscar Championship is the first GT showdown of the season. The two hour, 40-minute Northeast Grand Prix at Lime Rock Park will feature only the GT Le Mans (GTLM) and GTD classes and is scheduled for the weekend of July 18-20. The race goes green on Saturday, July 20 at 3:10 p.m. ET live on the NBC Sports App and NBCSports.com, with the NBCSN broadcast scheduled for 10 p.m.