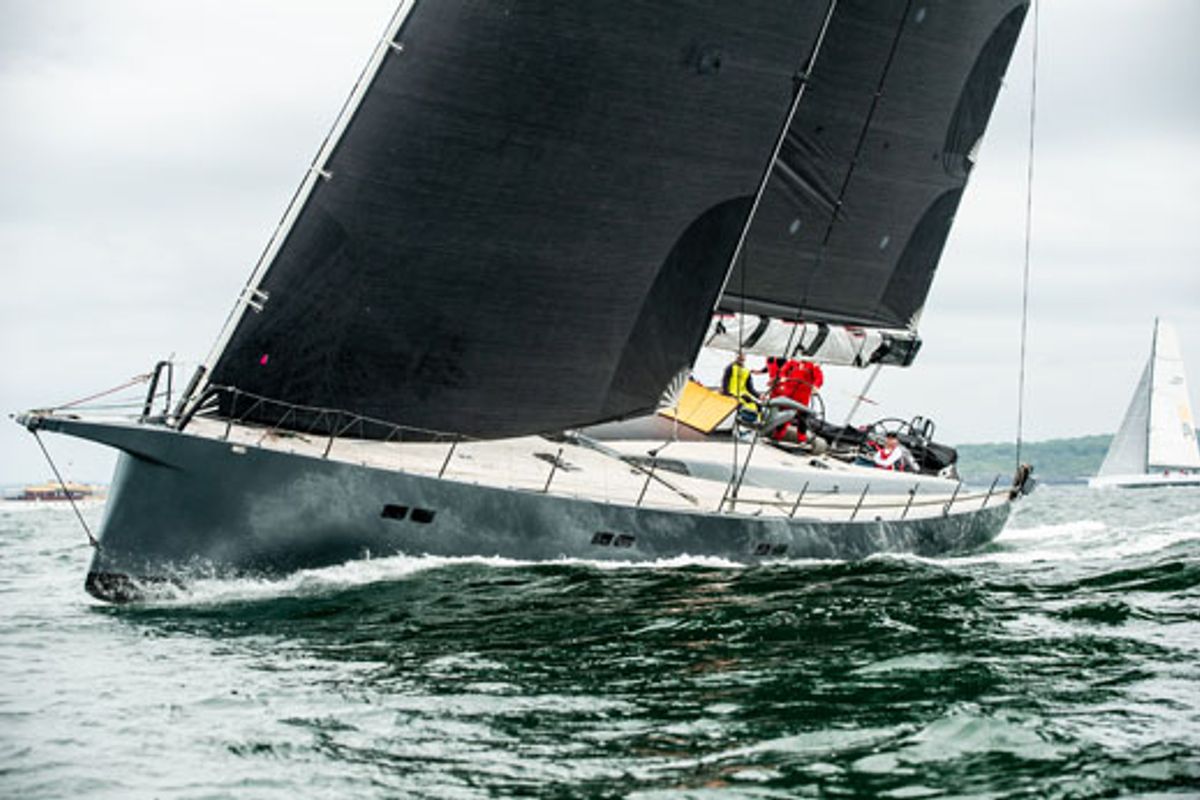 Like an immovable bouncer barring entry to the English Channel nightclub, the giant ridge, or zone of high pressure, continues to define this latter half of the Transatlantic Race 2019.

While the center of this huge “bubble” of light winds has retraced south gradually, its reach still extends north into the Celtic Sea (between Cornwall and southern Ireland). The latest forecasts show little prospect of it shrinking further south before the boats reach the Western Approaches.

Thus, for the next wave of boats that have spent the last week skirting the perimeter of the high, there is now no option: They must cross the high and accept a frustrating, but inevitable, down-turn in speed.

“Ordeal by ridge” has been the case since late last week for Clarke Murphy’s Rogers 82 Aegir (at right). Only this morning is the crew on board feeling some reprieve as not only are they through to the east side of it but have also “made land.”

This morning at around 0900 UTC they were passing south of the Scilly Isles with some 40 miles to go before reaching the mandatory gate, extending 4 nautical miles south of the Lizard Point lighthouse. The wind is still light but after a stop-start night this morning Aegir is on course and making 10 knots with an ETA in Cowes of sometime Tuesday morning local time.

Last night Aegir’s navigator Mike Broughton wrote: “It looks like we have flat seas and light winds to the finish. For me, I have never seen calmer seas on a crossing of the Atlantic. I have just quizzed the on-watch team: Clarke Murphy, Ian Budgen and Abby Ehler and they all concur (we have over 41 crossings between us).”

Feeling the greatest pain this morning is Eric de Turckheim’s Teasing Machine crew. History will show the French Nivelt/Muratet 54 as having sailed the most miles in the Transatlantic Race 2019, after they followed an enormous, circuitous route around the top of the high that took them literally half way to Iceland. However, over the last 48 hours, Teasing Machine has run out of options and this morning is both mid-Celtic Sea and mid-ridge, making headway—just—at 5 knots, having covered a mere 136 miles in the last 24 hours.

Behind, The Kid, skippered by Jean-Pierre Dick, has been forced to retire from the race and is en route to southwest Ireland. As the Vendée Globe veteran explained: “We have been delighted to be able to participate in the Transatlantic Race 2019 alongside valuable competitors. We are now entering a very difficult meteorological environment which implies a very long navigation time to Cowes. Unfortunately, some members of our crew cannot escape dealing with professional constraints within the next few days. Hence and with great sadness and regret, we have decided to stop racing and will directly go to Ireland for a stopover.”

Making the best of a bad hand is Giles Redpath’s Lombard 46 Pata Negra, which has benefited from being marginally smaller and slower. This has meant she has been able to sail a more direct route than her rivals, but even she was north of 52°N yesterday before “beginning her descent.” As a result, she currently leads IRC 2 and all this despite some “significant battery/electrical issues” – since resolved – that crewman Chris Hanson reported required them to sail in power survival mode, navigating under handheld GPS alone.

It is just a matter of time when they too will have to accept their high-pressure punishment. “Our battery issues are somewhat better. It seems one of the house batteries was stealing everything from the others and then giving up. We’re down to two and being careful with power usage but in much better shape now so Andy & I rejoined the watch system last night,” said Chris Hanson. “With Satcom usage restored, all eyes returned to the tracker and the want to retain the lead. Going to be tough considering the conditions but all want to win. The routing software wants to take us on a tour around the south of Ireland, but there is so little variance we’re going straight for Land’s End. Hope it works!”

They have all enjoyed riding the mostly north-south orientated band of moderate southerlies enabling this group of generally older and “sturdier” craft surprisingly to make better progress than the more modern and nimble hardware ahead of them. For example, over the past 24 hours, all have covered 200 to 220 nautical miles compared to the 180 or so miles of Pata Negra and The Kid.

However, even they are now having to head north to avoid the worst of the ridge, their bows pointing towards southern Ireland, rather than the Lizard.

On board Carina, skipper Potts reported: “We have been watching the high for several days now as I’m sure all of our competitors have. In 2011, we had a similar situation where we all fell into a parking lot a couple of days before the finish. We are trying to avoid that all costs, but it is pretty obvious that there isn’t a way around it. Some of the larger boats took a much more radical approach to avoiding the high and we are doing the same, but we won’t be making as large a detour because the high has moved and dissipated somewhat.”

While that is the main hurdle ahead of them, Potts in fact believes that the outcome of the Transatlantic Race 2019 will be decided between the Lizard and the finish, down to how lucky they are with the tides, especially whether they coincide their arrival into the Solent with a favorable phase of the tidal sequence. “If it is flooding, we’ll be lucky. If it’s ebbing, it will be much more difficult.”

This morning Carina was enjoying 15 knot southerlies as she has all weekend. Potts reported that the sea temperature is warm and so they have seen much sea life including whales, dolphins, tuna and even a Portuguese Man of War. While on board all is fine. “Our executive chef Lee Reichart has been surpassing his culinary skills with every meal. We are well fed and our navigator Gary Grant has been as good as it gets. The rest of us have been trying to keep us going in a straight line.”

At the latest guess, Carina is expected to arrive in Cowes on Friday.