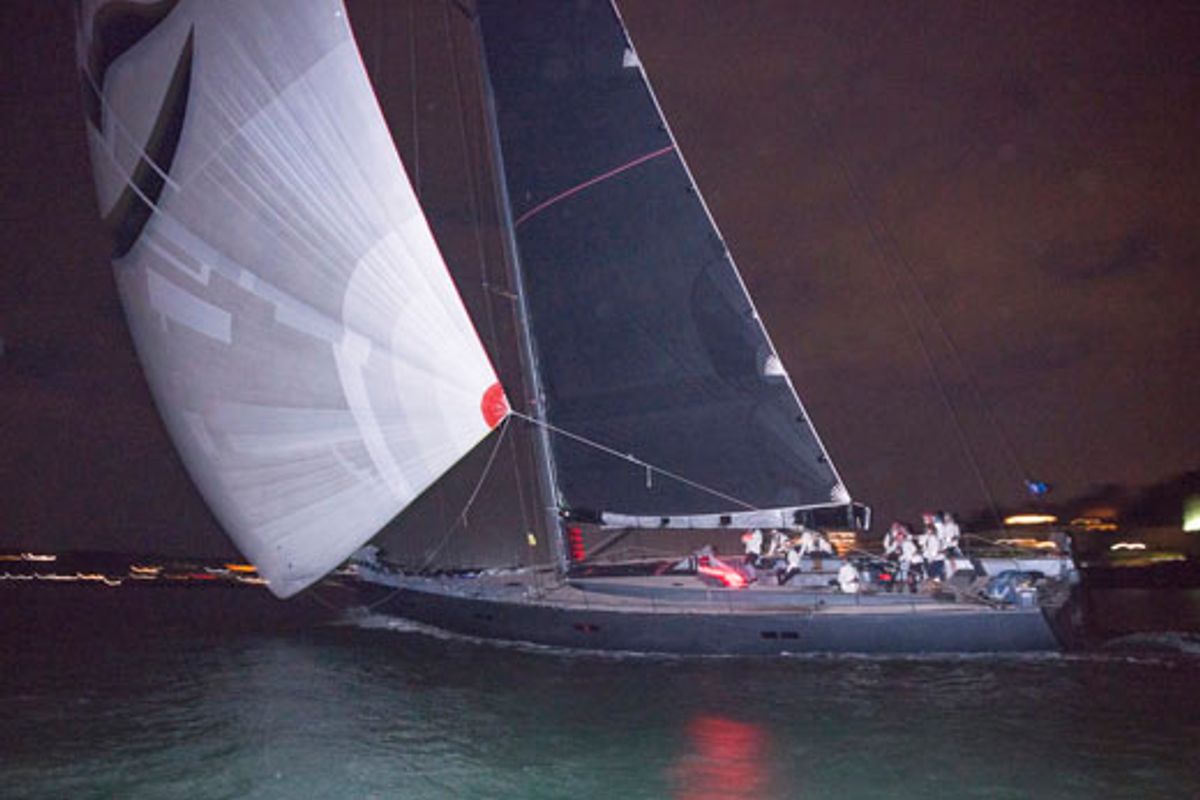 Clarke Murphy and the crew of the 82-footer Aegir were the third boat to finish the Transatlantic Race 2019. Last night they crossed the finish line off the Royal Yacht Squadron in Cowes, Isle of Wight, England, at 2213:58 UTC for an elapsed time of 14 days, 6 hours, 53 minutes and 58 seconds. Aegir is currently projected to place fourth in IRC 2.

This was the fourth Transatlantic Race since 2005 for Clarke Murphy, the 56-year-old CEO of a New York-based executive recruiting firm. For him, the race was about introducing three of his children, daughters Devon and Caitlin and son Liam, to the wonder of open ocean racing. In that regard, it couldn’t have gone better.

“The race was great, we got across safe and sound. Great crossing, good fun. It all worked out well. Having Caitlin, Devon and Liam aboard was an out of the park home run. It was their first trans-Atlantic and they had a great time,” Clarke Murphy said.

“I’ve done the race with Mike four times, Ian three times, and twice with Abby, Alec and Jake,” Clarke Murphy said. “To have the kids be with such experienced friends was awesome. The kids are very quantitative and loved looking at the Gulf Stream overlaid on the course. Mike was great teaching them about weather routing. They really enjoyed that aspect of it.”

Aegir’s race wasn’t very complicated. According to Clarke Murphy, they had a good first week in the upwind/hard reaching conditions getting to the southeast corner of the ice zone limit. But when the weather turned into light air in the past few days and included VMG running, Murphy knew it wasn’t their strength. Aegir had to tack through the Lizard Point gate, which it cleared Monday evening shortly past 1700 UTC, and then needed another 29 hours to cover the final 155 nautical miles to the finish.

“It was a tale of three races,” said Clarke Murphy. “The first couple of days through the Gulf Stream, then getting past the ice limit, and then navigating the high in the English Channel. The third race started about three days ago, and that’s what we expected. The weather went our way in the first part of the race in terms of wind angles and the weather calls we chose to follow.”

Clarke Murphy said the hardest part of the trip was Day 2, when the fresh water pump broke, up until clearing the Lizard Point gate.

“Day 2 is when we realized we had no water. We had to hand pump fresh water for 2,700 nautical miles, which we did,” said Clarke Murphy. “The second hardest day was (July 8), when we were floating through the gate and a long way from the finish. There was no silver bullet to be found. We went to the French side of the English Channel in search of wind, but there was no breeze. It was the right call, but it was a long way to go for short gains. That was tough, but you deal with what Mother Nature gives you.”

Tough is also an apt description of what Eric de Turckheim and crew aboard Teasing Machine have experiencing. The crew finally cleared through the Lizard Point gate at 1130 UTC after an excruciatingly slow approach. At this morning’s 1030 UTC position report, Teasing Machine had covered just 59 nautical miles in the past 24 hours.

After clearing the gate, Teasing Machine continued on its northeasterly heading, making about 5 knots while aiming almost for Plymouth in search of favorable tidal currents. The crew should have favorable or slack tides until about 1600 UTC, at which point the currents will turn against them.

Behind Teasing Machine there’s a tremendous battle going between Giles Redpath’s Lombard 46 Pata Negra and Peter Bacon’s X-44 Lucy Georgina. Pata Negra had led IRC 2 on corrected time up until about three days ago, when Lucy Georgina began closing up the miles while Pata Negra sat becalmed off the coast of Ireland. Bacon’s crew has closed more than 100 nautical miles over the past three days.

At 1030 UTC Lucy Georgina was the new class leader, just 4.5 miles due west/southwest of Pata Negra, which was some 20 nautical miles from Land’s End. The two boats were lined up to pass to the north of the Isles of Scilly.

“I’m typing this from the foredeck on my mobile phone instead of the computer for the Satcom as I look out forwards towards Land’s End, with the very flat Scilly Isles to starboard and an unfortunate view of Lucy Georgina (good for them!) behind us,” said Pata Negra’s erstwhile embedded reporter Chris Hanson.

“It’s been fascinating watching the fleet squash up as we enter the English Channel because of the huge high pressure that runs from here to the Azores,” Hanson continued. “At sunrise this morning we were delighted to see a pod of dolphins who were only too keen to entertain as we moved along at 6 knots.”

The boats in IRC 3 – Howard Hodgson’s True, Rives Potts’ Carina (presently the class leader) Hiro Nakajima’s Hiro Maru, Mark Stevens’ Kiva and Constantin Claviez’s Charisma – continue to progress nicely in mostly southwesterly winds. True will be the first to sail into lighter winds near the English coast and will have to watch the compression effect with Carina and Hiro Maru, who will likely ride the southwesterlies a bit longer.

At the back of the fleet, Claviez’s venerable Swan 44 Charisma passed the 1,000 nautical miles to go mark this morning, riding southwesterlies of 15 to 20 knots on the bottom of a ridge of high pressure.