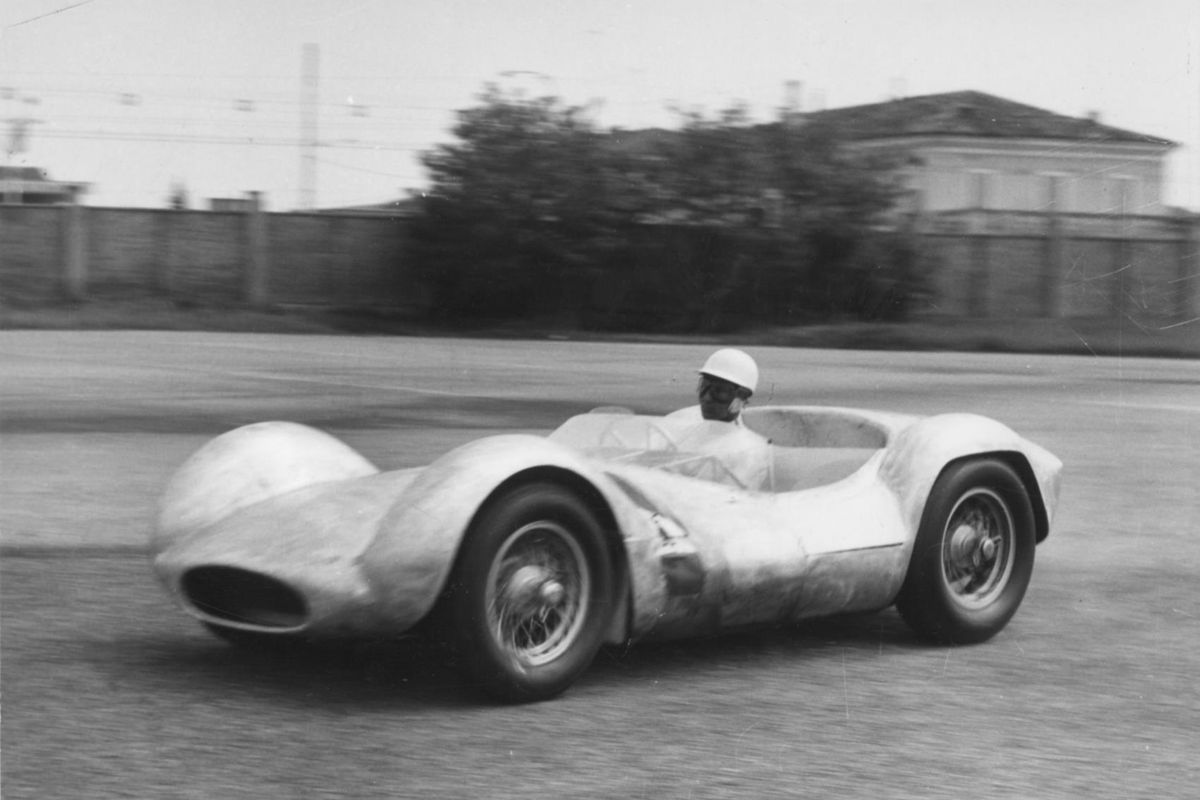 On 12 July 1959, the Maserati Tipo 60 “Birdcage”, with the 30 year old Stirling Moss at the wheel, made its race debut in the Sport category at Rouen. The Tipo 60 recorded its first win, defeating two Lotus 15 cars and getting the fastest lap in 2.28.5 at an average speed of 158.594 km / h. This was just the first of a long series of victories: the Birdcage also won four Italian Hill Climb Championships (driven by Odoardo Govoni in 1960-1961-1962 and Nino Todaro in 1963) and two Italian circuit racing Championships (in 1960 with Mennato Boffa and 1963 with Nino Todaro).

In 1958, the Orsi family, at that time the owner of Maserati, decided to assign engineer Giulio Alfieri, technical manager, the project to identify new technical solutions to make the competition cars even more competitive. Alfieri was given complete freedom of action, and this provided the basis for a historic turning-point for the company. The initial idea was to build a new car with a monocoque structure, but this proposal did not go ahead.

In October 1958, Alfieri and his collaborators discussed how to achieve light weight combined with very high torsional rigidity. They designed a revolutionary chassis consisting of around 200 steel tubes of very small diameter (between 10 and 15 mm) which, combined together in very short lengths in a complex mesh, formed a birdcage structure - hence the car's nickname, “Birdcage”.

For the Tipo 60 a compact 2-litre four-cylinder engine was mounted in the middle of the car, at a 45° angle to reduce space at the front and lower the centre of gravity. This gave the car exceptional balance in terms of both weight and aerodynamics. The engine, derived from that of the 200S, was suitably modified, with an almost complete restyling of the cylinder head, shifting the exhaust to the right-hand side. The bore/stroke ratio also changed from the 1.226:1 (92x75mm) of the 200S to 1.302:1 (93.8x72mm).

The car was equipped with two Weber 45 DCO3 carburettors, battery-powered twin ignition with Marelli and a maximum power output of 200 hp. The suspension systems consisted of spiral springs at the front and De Dion rear axle with single transverse leaf spring. The technical solutions adopted by the Type 60 made it possible to limit the weight to 570 kg.

Construction of the first car was completed during May 1959, with a chassis consisting of completely rigid high-quality chromium steel tubes. This first unit was handed over to Stirling Moss, who performed a variety of test drives, on the Aeroautodromo at Modena and at the Nürburgring. However, during these test drives Alfieri realised that because of the steel's high rigidity, a large number of hairline fractures were appearing in the welds, putting the safety of the driver at risk. He therefore surprised everyone by deciding to replace the high-grade steel with one of relatively average quality, which would not generate these adverse effects in response to stresses, enabling the chassis to settle without creating fractures. Giulio Alfieri's idea was the right one, and his many critics were proved wrong.

Thanks to the victory achieved in Rouen on 12 July 1959 and to other prestigious results, the Tipo 60 "Birdcage" became the object of great demand from private teams and Gentlemen Drivers who could afford the high purchase price of the “Birdcage”.

The “Birdcage” attracted a great deal of attention from teams competing in 3 litre Sport cars in the U.S.A. This persuaded Maserati to consider a solution which would satisfy the demands of its best customers. The four-cylinder engine was upsized to 2,890 cc. This boosted its power by 50 hp and the total weight of the car (now known as the Tipo 61) increased to almost 600 kg due to the adoption of a new larger propeller shaft. Fuel consumption was more or less unchanged, and this was vital in endurance races, where the Birdcage was able to drastically reduce the number of refuelling stops. In 1960 Maserati did not field an official team, but decided to support Lloyd Casner's U.S. Camoradi team, which lined up two Tipo 61 cars at the Nürburgring 1,000 Km.

The crew comprising Stirling Moss and Dan Gurney won the event, while Masten Gregory and Gino Munaron finished third. During the Le Mans 24 Hours, one of the Maserati Tipo 61 cars entered reached a speed of 270 km/h, setting a new record for a 3 litre Sport car. In the same year, Masten Gregory and Lloyd Casner, achieved another victory at the Nürburgring, fighting off the Ferrari 250 TR 61 driven by the Mexican Rodriguez brothers.

The last two Tipo 61 cars were produced in January and February 1961. In the same year, three Tipo 61/76 engines were built.