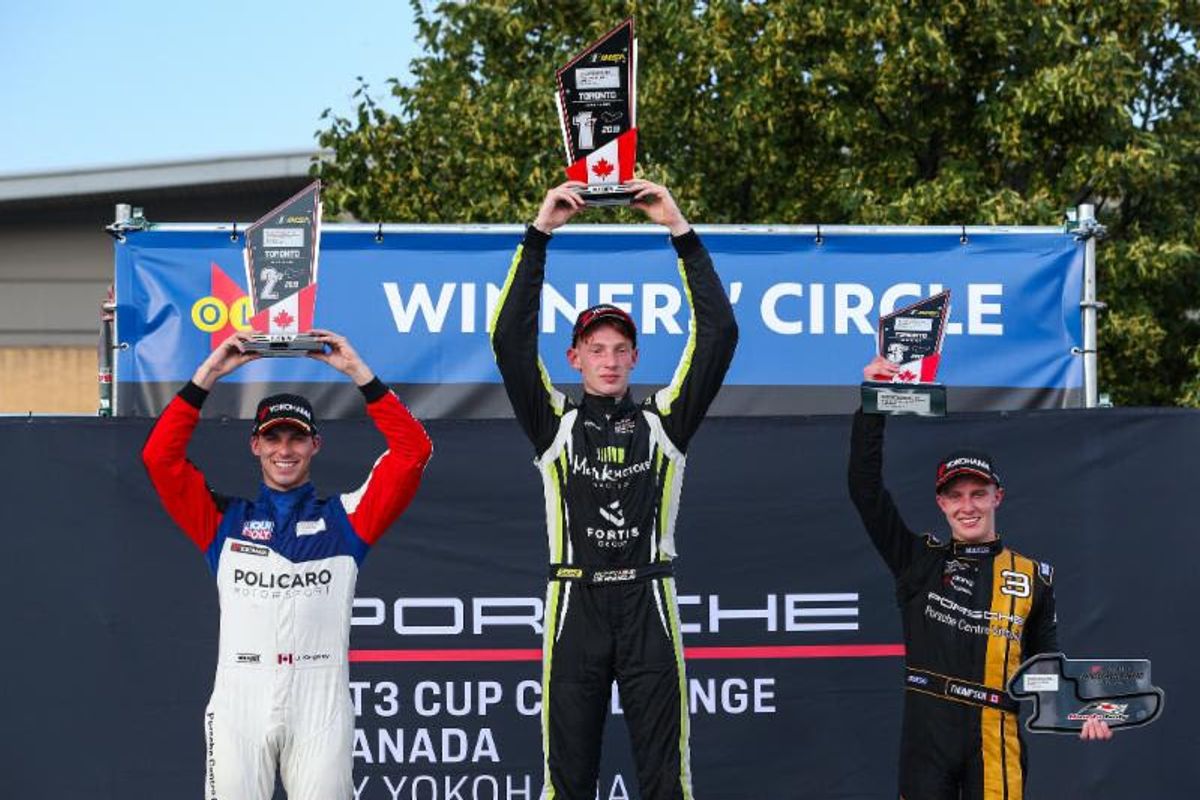 Roman De Angelis has been on a roll in Porsche GT3 Cup Challenge Canada by Yokohama this season, entering the Indy Toronto weekend with five consecutive wins through six rounds.
If there was one factor, though, that could have thrown the 18-year-old off his game on Saturday ahead of Race 1, it was weather.

A strong summer storm rolled in over the Streets of Toronto just as the GT3 Cup Challenge Canada green flag time was approaching and ultimately caused a near two-hour delay. However, the storm passed, allowing the field of Porsches to battle not only each other, but also changing track conditions as the surface dried over the course of the 45-minute race.

For De Angelis, overcoming the challenges to score a dominating 45-second, flag-to-flag victory on the 1.786-mile street course made this particular victory a bit sweeter than the rest in his No. 79 Mark Motors Racing Porsche 911 GT3 Cup car.

“There was a pretty big build up right before the race,” said De Angelis, of Belle River, Ontario. “There was probably two hours where we were sitting there waiting to see if we were going to race or not tonight. To be honest, I don’t think I’ve ever driven better in my life. Something about Toronto and the rain earlier on just fitted the Mark Motors car and the conditions. It was a lot of fun on the slicks early on. Once again, I just can’t thank Mark Motors enough. This is our sixth win in a row here and probably one of the best feelings I’ve ever had right now.”

De Angelis will seek another weekend sweep in GT3 Cup Challenge Canada on Sunday, with Race 2 of the weekend scheduled for 1 p.m.

Earning his second runner-up position in three races was Jeff Kingsley of Ajax, Ontario, in the No. 16 Policaro Motorsport Porsche. Kingsley held the position throughout the race after qualifying second earlier in the day.

Rounding out the podium – and also taking home the Yokohama Tire Hard Charger Award for gaining the most positions during the race – was Parker Thompson in the No. 3 Porsche for SCB Racing.

“What a day,” said Thompson, who is pulling double duty this weekend between GT3 Cup Challenge Canada and the Indy Pro series. “I was running back and forth between two categories and honestly, this SportsCarBoutique No. 3 was on rails this whole weekend. Unfortunately, I missed it in qualifying and ended up P7, which is disappointing. It’s one of our worst of the year and honestly, the car is the best it’s been.

“I wanted to make sure I put on a show and drove that car up the field and that’s what we did. No better way to showcase your talent than half wet, half dry. The car was unreal. I can’t thank the crew enough, Owen Hayes, Ilker Starck, our owner. These guys work so hard to get to track every weekend so it’s awesome to reward them with a podium.”

In the Platinum Masters class, Marco Cirone is on a streak of his own in the No. 88 Mark Motors Racing Porsche. After sweeping both victories at Canadian Tire Motorsport Park just last week, Cirone repeated on Saturday in the class for drivers 45 years and older.

Cirone described his race strategy as one with a bigger picture in mind, as he seeks his sixth Platinum Masters championship in 2019.

“The weather conditions were very, very challenging,” said Cirone. “It was very difficult to put the power down and there was a lot of action in front of me and behind me. I wanted to protect my point lead and here if you make a mistake, you’re in big trouble. I wasn’t aggressive as much as I should’ve been, but I don’t regret it. I’m glad I got the win, I’m glad I preserved the car and I’m here to race tomorrow.”