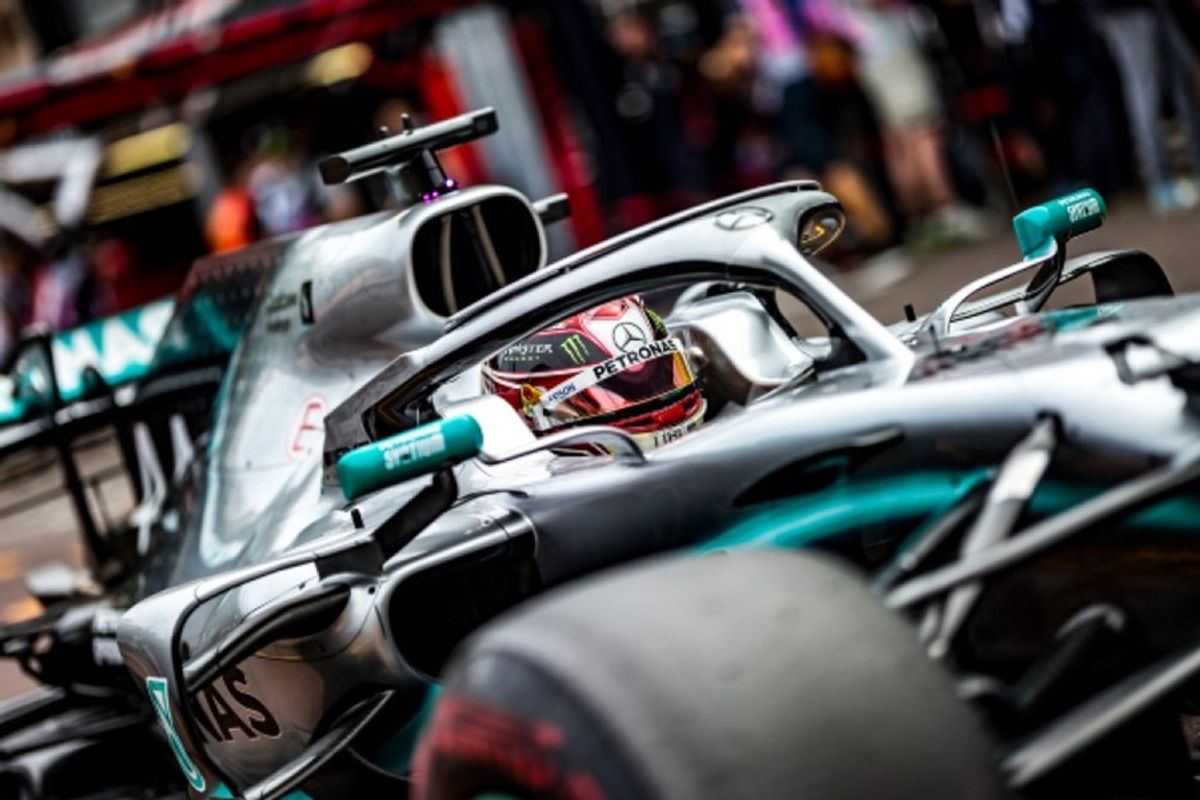 AT THE END OF ACTION-PACKED RACE

Lewis Hamilton benefited from a mid-race safety car period to overhaul team-mate and early race leader Valtteri Bottas to claim a record sixth British Grand Prix victory at the end of a race that further back was characterised by a race-long duel between Ferrari and Red Bull.

Hamilton’s eclipse of the benchmark he shared with Jim Clark and Alain Prost hung on a twist of fate on lap 19.

After pressuring pole sitter Bottas after the start, Hamilton briefly got past his team-mate. Bottas though responded and re-took first place with a great move past the champion at Copse.

Bottas then exerted control over the pair’s first stint. The Finn pitted from the lead on lap 16, taking on another set of medium tyres, and soon after the complexion of the race changed utterly.

Alfa Romeo’s Antonio Giovinazzi lost control of his car on entry to Club corner and ended up beached close to the apron of the gravel trap. The incident brought out the safety car and Hamilton approaching the final corners immediately swing towards the pit lane. The rapid reaction and a set of hard tyres put the Briton out into a lead he would hold until the flag.

Bottas, meanwhile, was now locked into a two-stop race and would need to pit again. And armed with good pace and thanks to the fireworks happening behind, the Finn was comfortably able to pit again on lap 45 for soft tyre and emerge in second.

While Hamilton’s 80thcareer win, his record sixth at Silvertrone and Mercedes’ seventh one-two finish of the year will occupy the headlines, the action-packed battle for the final podium place between Ferrari and Red Bull was just a thrilling for the huge crowd.

The contest went right to the race start. When the lights went out Ferrari’s

Charles Leclerc held third and ahead of Red Bull’s Max Verstappen. Behind them Pierre Gasly, starting in fifth place, made a good getaway, but Sebastian Vettel’s start was better and the Ferrari managed to get past the Red Bull on the run to Turn 1.

Verstappen pushed hard to get past Leclerc but the Ferrari driver resisted well and he eventually forced an error from the Dutchman that dropped him back towards Vettel. That scrap, though, allowed Gasly to close up to Vettel and the Frenchman pounced on lap 12, ambushing the German down the inside of Turn 3 to take P5. His grip on the position was brief, however. At the end of the lap Gasly pitted for hard tyres and he rejoined the action in P10.

On the following lap Versteppen followed suit, immediately behind Leclerc. The pit stop battle was won by Red Bull and the Dutchman swung out into the pit lane alongside the Ferrari. They stayed side by side almost to the exit but eventually Leclerc, marginally behind, gave way and Verstappen was elevated to fourth.

Again, though, his advantage was short-lived. On cold tyres Verstappen struggled for grip and he ran wide. Leclerc swept past to retake P3. What followed was an epic battle for the position, with both drivers racing on the limit for several wheel-banging laps that saw Verstappen only just hang onto the position.

However, the battle was defused when Giovinazzi beached his car and the SC period sparked a flurry of pit stops. Hamilton was first in for hard tyres, a move that handed him the lead ahead of Bottas who didn’t stop. Vettel was next in for the same compound and Max then followed suit.

Leclerc was briefly left on track and when Ferrari eventually pitted him for hard tyres he dropped to P6 behind Verstappen and Gasly, with the top three positions now occupied by Hamilton, Bottas and Vettel.

When the race went green again the combat between Verstappen and Leclerc resumed once more. This time it was Leclerc on the offensive and with Verstappen again struggling for grip on the hard tyres, the Ferrari driver made his move. Once again they fought tigerishly but eventually Verstappen pulled clear of the Ferrari. And with pace in hand over Gasly, who was on older hard tyres, Red Bull made the smart moved and allowed verstappen through to claim P4 and begin pursuit of Vettel.

On lap 36, Leclerc began to exert heavy pressure on Gasly and into Vale the Ferrari driver went around the outside of the Red Bull. Gasly tried to defend but he had to give way eventually and Leclerc moved ahead.

The reverse was happening further up the road, as Verstappen attacked Vettel. On lap 38 the Red Bull driver set up the perfect move, closing in and powering past the Ferrari into Stowe. However, the move meant that Verstappen went slightly wide on exit and Vettel saw an opportunity. He closed up behind Max but misjudged the braking point for the following corner and slammed into the back of Verstappen’s RB15. Both drivers ended up in the gravel trap but Verstappen was quickly back on track, in fifth place behind Gasly. Vettel, though, dropped to back of the field, pitted for a new front wing and was later handed a time penalty for causing the collision. Verstappen, now driving a damaged car, settled into fifth and nursed his car to the flag.

And then after 52 action-packed laps Hamilton crossed the line to take his 80thcareer grand prix victory and a record sixth British Grand Prix win ahead of Bottas and Leclerc. The Briton also managed to pick up the point for fastest lap on the final tour of the race.

With the Red Bulls in fourth and fifth, sixth place went to McLaren’s Carlos Sainz, the Spaniard profiting from the safety car to rise from P13 on the grid. Behind him Daniel Ricciardo finished in P7 ahead of the Alfa Romeo’s Kimi Räikkönen, Toro Rosso’s Daniil Kvyat and Renault’s Nico Hulkenberg.