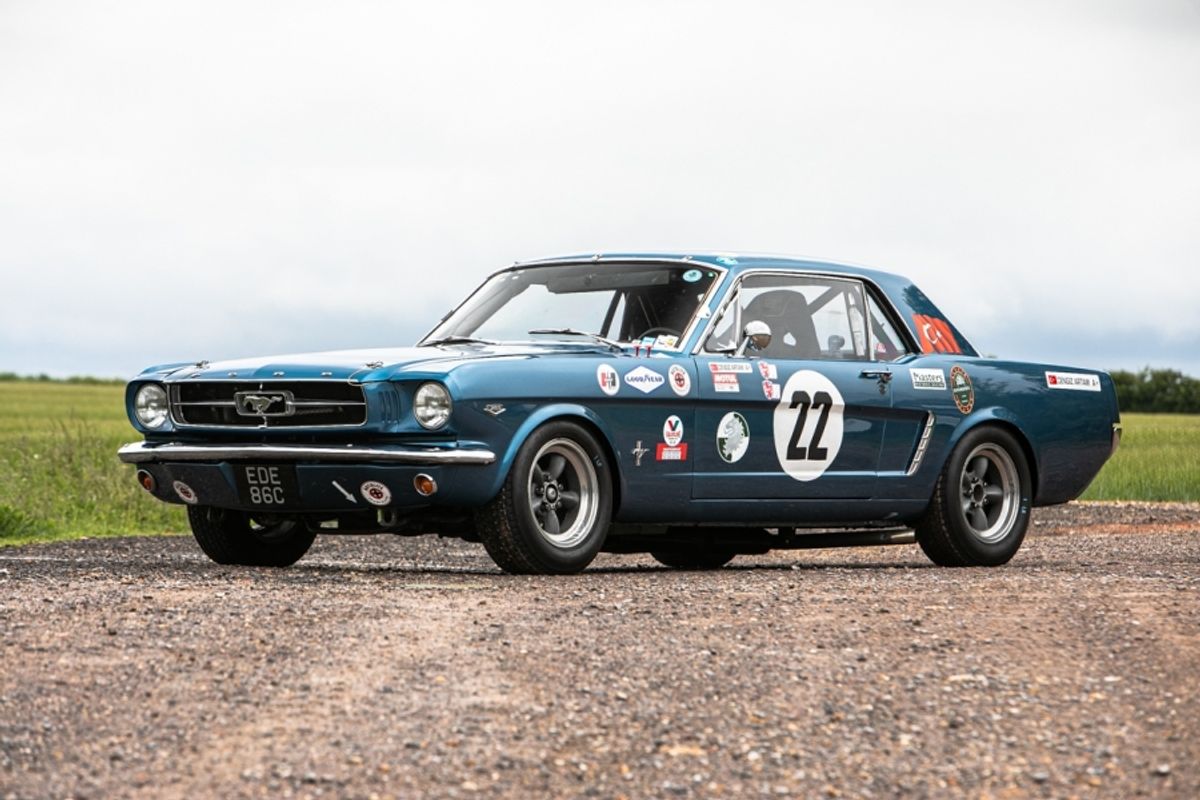 Corvette, Mustang, Stingray all summon images from Americas classic period of car manufacturing resulting in some of the most iconic cars and now available at auction in Notchback and Convertible, ready to race or enjoy on the open road.

The Ford Mustang was a fearsome race car with its thunderous V8 engine and Silverstone Auctions are delighted to offer this fabulous 289 Notchback estimated at £65,000 to £75,000. Coming with a fascinating history of its time racing in America and setting the track record in 1965 at the Savannah International Speedway in the hands of David Tallaksen, it was then successfully campaigned by Gene Felton in 1966 and 1967. The car was subsequently retired and put into storage until the late 1980s when it was restored to its former glory. It became one of the first historic race cars to gain an SCCA certificate in 1992. After 28 years of ownership, the car changed hands in 1993 and remained in the USA until 2006 when it was sold and headed off to Denmark where it was then campaigned and in the 2014 Goodwood Revival Meeting with ex-F1 driver Rupert Keegan, prior to a full restoration in 2008. Purchased in 2015 by the current owner, the car has been prepared by WDK Motorsport and had an engine rebuild in 2017 at considerable expense. Its most recent outing has been at the 2017 Goodwood Revival and the Tour Auto.

The American muscle continues with a very rare 1964 and a Half Mustang convertible, as they were known. This is one the early 1964 cars produced in the July and finished in the classic combination of Poppy Red with a white interior and black trim and fitted with a 4.3-litre V8 engine. Imported to the UK in 2014 this car has been very well cared for and formed part of the current vendor’s collection. This is a superb example of a very rare car and is offered at No Reserve.

Our next two lots are truly superb cars, both being Corvettes. The C1 is a late 1961 car and one of the last to feature the two-tone colour combination. The car was restored in America including, at considerable expense, a new hood. In 2013 it was imported to the UK where the car was further improved including a respray and the suspension was updated to make for a more comfortable ride. Estimated at £40,000 to £50,000 this is a car that will turn heads as you drive by. Superbly finished and with the original wheels and suspension components included in the sale, this is an iconic car of the 1960s.

Adam Rutter, Classic Car Consigner for Silverstone Auctions commented: “I do have a soft spot for American cars especially Corvettes and Mustangs. The estimate for the C1 is very reasonable for a nicely prepared car and will surely attract attention. The 1965 Mustang with race pedigree will get you on to some great grids, like the Le Mans Classic or Goodwood and Tour Auto plus it is road legal! The 1964/5 Mustang is from the first year of production and as such gets enthusiasts excited and at No Reserve, what a great opportunity.”

The second Corvette is a 1966 Stingray C2 which has been in the current ownership of Stephen Ouvaroff of the American Car Centre for the last 45 years. This car comes with an amazing history and incredibly has never been restored. The Rally Red paintwork and black leather interior are in an original condition with lovely patina. The car has only travelled 44,000 miles and is validated by its MOT certificates. With a new clutch fitted just 1,000 miles ago, all electrics working as they should this really is one fabulously original and iconic car and estimated at £50,000 to £60,000.

In case you are thinking of popping over to the continent for a summer break and would like a left-hand drive but a non-American car, there are several in the sale including this 1996 Ferrari F355 Spider. With just 26,000km on the clock and originally delivered to Germany, this F355 found its way to the UK in the late 1990s and was owned by a Ferrari specialist, from whom the current vendor purchased the car. After 2009 the vendor and the car moved to Spain where it has been maintained by Ferrari Valencia and passed all the necessary tests. This F355 is estimated at £42,000 to £50,000 and is a great way to get into Ferrari ownership at a sensibly guided price.

Another of our stand-out left-hand drive cars is this 2006 Mclaren-Mercedes SLR with just 16,500 miles on the clock from four former keepers. The current vendor has owned the car since July 2015 and it has formed part of their significant private collection. The SLR Centre at Brooklands has maintained the car and over £16,000 has been spent on the car 1,000 miles ago. This is a fantastic car, a collaboration between Mclaren and Mercedes to use their combined knowledge gained in motorsport and transfer it to the road. Estimated at £160,000 to £180,000 this is a fantastic opportunity to own a special and collectable car.

Harry Whale, Auction Manager for Silverstone Auctions commented: “We are very proud of our catalogue and have some really superb American cars both in race and road condition. We also have a number of left-hand drive lots too just in time for the summer break.”