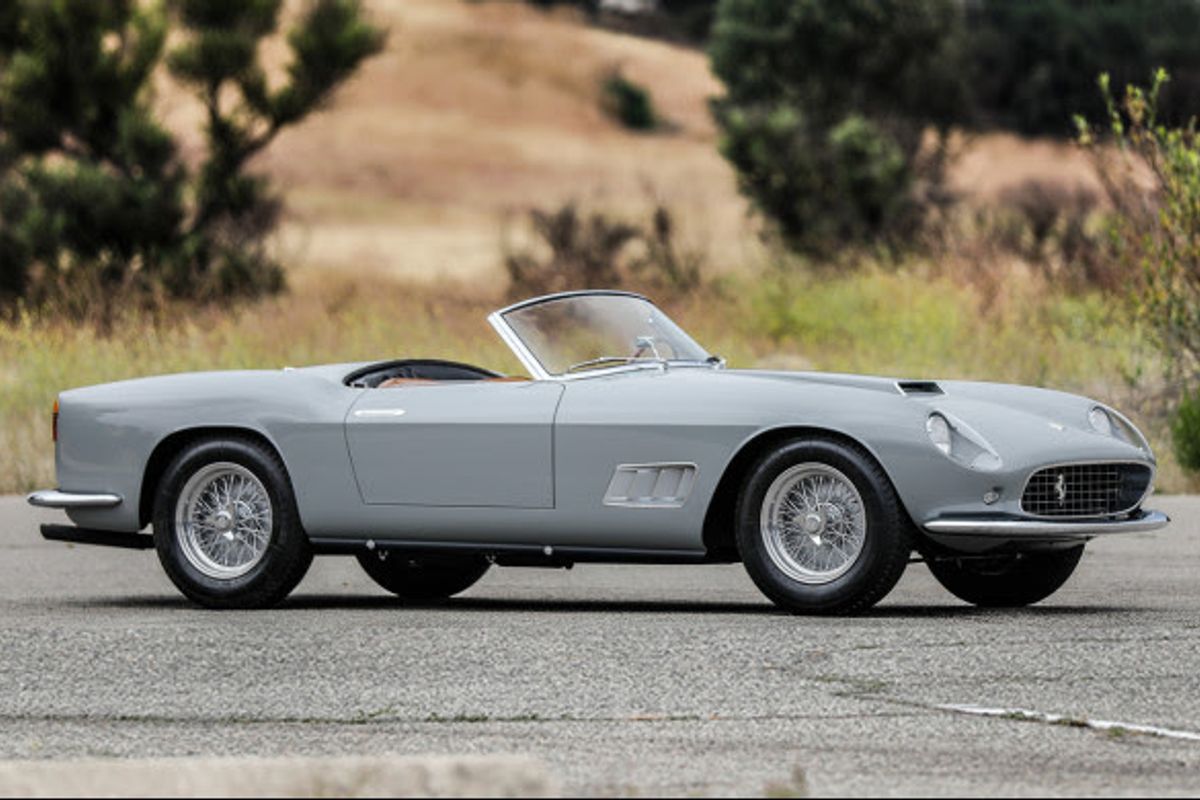 THIS CAR
“Officially, it is known as the Ferrari 250 Granturismo Spyder California; but, to those who have driven, ridden in or seen one speed by, it can only produce an all-encompassing feeling of respect for what must be recognized as the epitome of a classic open sports car – solid power with reliability and versatility, a convertible top, excellent road holding and handling, and a style that speaks for itself.” – George M. Carrick, The Spyder California: A Ferrari of Particular Distinction

In late 1957, Ferrari was at work developing a new open 250 GT model for the booming North American market. Ferrari’s two most successful and influential dealers, Luigi Chinetti and John von Neumann, impressed upon the factory the need for a simple, dual-purpose 250 GT convertible – a car that could be used to commute during the week and raced with success on the weekend.

The result was the California Spider, a high-performance 250 GT with striking coachwork by Carrozzeria Scaglietti. As its name suggested, the model was aimed at a very specific segment of Ferrari’s American clientele: young, moneyed enthusiasts who wanted a stylish, thoroughbred sports car that was equally at home on the road and track. Like other high-end European sports cars aimed at the American market, the California Spider featured a racy, swept-back windscreen, minimal interior appointments, bucket seats, and a lightweight folding top.

Faithful to its original concept, the California Spider was often put to use as a racing car and, in this capacity, it achieved a remarkable degree of success, including class wins at Le Mans and Sebring along with numerous victories in SCCA B-Production events.

Between 1957 and 1963, Ferrari built just 106 California Spiders – 50 of the original long-wheelbase (LWB) version and 56 of the final short-wheelbase (SWB) variant. Today, the model remains one of the most iconic and desirable Ferraris ever produced – a mechanical object of exceptional beauty and sophistication that has long captured the interest of connoisseurs.

The California Spider presented here, a spectacular LWB model, is among the finest examples of this rare and exotic breed.

Completed in November 1958, this car, no. 1055 GT, is the 11th California Spider built and the second constructed on the improved tipo 508D chassis. As noted on the factory build sheets, it was originally equipped with the new tipo 128D V-12 engine, which featured six-port cylinder heads, 9:1 compression, three Weber downdraft carburetors, and a single rearmounted Marelli distributor. The gearbox installed was the latest 508D type with Porsche-type synchromesh and the final drive featured a 7 x 32 ratio, ideal for rapid acceleration.

The Ferrari’s coachwork, constructed of steel and aluminum by Scaglietti in Modena, is one of 38 examples that feature the highly sought-after coveredheadlamp treatment. Consistent with its late-1958 production date, this car shares many features with the contemporary Tour de France Berlinetta, including its side vents, taillights, bumpers, and headlamp covers. Taken together, these features give this particular car a simplicity and elegance that is distinct from the later series of California Spiders.

According to the research of marque historian Marcel Massini, 1055 GT was delivered to Luigi Chinetti Motors in New York and then shipped to Dave Fawcett Imported Motors, a foreign car dealership in Lubbock, Texas. In 1959, the California Spider was sold to its first private owner, Mr. M. Steven Deck, a local attorney. Mr. Deck enjoyed the Ferrari for a couple of years and, by 1962, it was in the hands of John Cheek, a resident of Florida.

That July, the Ferrari made its competition debut at the Osceola Grand Prix, a regional SCCA event held in Geneva, Florida. For its maiden race, the California Spider was entrusted to Ross Durant, a successful amateur driver who had previously campaigned sports cars, primarily Alfa Romeos and Ferraris, at Daytona, Sebring, and Nassau. Wearing race no. 19, Durant and 1055 GT placed 2nd Overall to a Lister Chevy and 1st in B-Production. Later that month, the California Spider was raced at the SCCA Divisional at Sebring, where it was again driven by Durant and finished 1st in Class and 3rd Overall behind two Chevrolet-powered specials.

By the mid-1960s, the California Spider had relocated to Nashville; and later in the decade, it was owned by Mario Ferrari, the proprietor of an Italian restaurant; and then Tom Huston, the founder of Tom’s Roasted Peanuts.

In 1972, Robert McKee, a dealer in Auburn, Alabama, discovered the California Spider in Georgia, and bought it in partnership with Gerald Roush, the founder of Ferrari Market Letter. In 1974, they sold the car to Ewing Hunter of Tucker, Georgia, who commissioned Ferrari specialist FAF Motors to restore 1055 GT to show condition. Once completed, the California Spider was displayed at the 1981 Ferrari Club of America Annual Meeting in North Carolina.

Four years later, Stanley Nowak, a noted automotive historian and author of a definitive book on the California Spider, brokered 1055 GT to Frank Gallogly who, in turn, sold the car to famed collector Anthony Wang of New York. Following a brief period in the famous Hans Thulin Ferrari collection during the early 1990s, the Ferrari was sold to James George, a Collector living in Mount Clemens, Michigan. Seeking to return the California Spider to its former splendor, Mr. George commissioned Ferrari specialist Michael Sheehan to perform a complete restoration and, upon its completion, 1055 GT made the rounds of the concours circuit, including appearances at the Cavallino Classic, FCA International Concours, Concorso Italiano, and Pebble Beach Concours d’Elegance®.

Held in significant private collections ever since, the California Spider has been maintained by leading marque specialists including Patrick Ottis who, in 2015, rebuilt the car’s engine. In 2016, the Ferrari Classiche Department certified 1055 GT, issuing a Red Book and verifying its compliance with the original construction specification and details. Importantly, this car still retains its original chassis, engine (internal no. 046 D), gearbox (internal no. 43D), rear end (internal no. 1D), brakes, suspension, and bodywork – few 1950s Ferraris can make such a claim. The current owner, an American collector with a stable of the finest road and racing Ferraris, recently commissioned his preferred restorer, the acclaimed marque experts Motion Products Inc. (MPI) in Neenah, Wisconsin, to perform an extensive cosmetic restoration on 1055 GT.

A firm equally renowned for their high-quality race preparation and award-winning concours restorations, MPI approached this project with their characteristically high standards of excellence. The results speak for themselves. Prior to embarking on any serious work, extensive research was undertaken to ensure an accurate presentation in every respect. During this process, the history of 1055 GT was thoroughly researched and similar, early production California Spiders were studied to establish reliable references.

Included in this work was a complete, show-quality repaint in the period-correct color of Grigio Vinovo, a non-metallic gray, perfectly suited to the clean, elegant lines of the California Spider. Additionally, the seats and door panels were reupholstered in tasteful brown leather, a new top was fitted, and the chassis was carefully detailed to concours standards. Chrome-plated Borrani wire wheels wearing Michelin Englebert tires further highlight the California’s striking outward appearance and exemplary attention to detail.

From the highly detailed coachwork to the exquisite engine bay, the overall presentation is beyond reproach and speaks to the extraordinary care that this Ferrari has received. If any doubt remains regarding the quality and breadth of this restoration, a comprehensive file of recent restoration invoices is available for review.

Since this work was completed in early 2018, 1055 GT has proven itself at the highest levels of judged competition, winning a Platinum Award at the Cavallino Classic, Third in Class at the Pebble Beach Concours d’Elegance®, and the Luigi Chinetti Memorial Award – as well as a second Platinum Award – at the FCA National Meet.

Bolstering its outstanding concours-quality presentation, 1055 GT is offered with an original handbook set, a proper inside-plug tool kit, the Ferrari Classiche Red Book, a history report compiled by Ferrari historian Marcel Massini, as well as an impressive file of documentation that traces the unique history of this special 250 GT.

Brilliantly finished and immaculate in every respect, this Ferrari is a truly outstanding representative of the original long-wheelbase California Spider. A stately presence on any show field, 1055 GT is sure to find further success at the most prestigious concours d’elegance and will certainly stand out, even in the rarefied category of open 250-series Ferraris.

Though this California Spider is sure to remain a sensational concours display for many years to come, it should not be forgotten that this Ferrari is a real performer. The classic three-liter V-12 delivers an unforgettable rush of acceleration accompanied by a symphony of Abarth exhaust and the pure, visceral experience of open motoring. It is in high-speed touring that the California Spider really comes alive; it would make a fabulous entrant for events such as the Colorado Grand, where, on long sweeping turns and mountain passes, driver and passenger can enjoy 1950s grand touring at its finest.

An exquisite beauty with the athletic performance of a true thoroughbred, this covered-headlight LWB California Spider possesses every characteristic that a collector looks for in a classic 12-cylinder Ferrari: beautiful open coachwork, unquestioned authenticity, competition history, and an absolutely sensational appearance. Beyond these criteria, this Ferrari benefits from a sophisticated presentation in attractive period-correct colors, Ferrari Classiche certification, and a world-class restoration performed by one of the most respected names in the field.

In the eyes of many Ferrari experts, this magnificent car is one of the most appealing California Spiders in existence. Gooding & Company is proud to present 1055 GT, a superb 250 Ferrari that possesses all the fabulous qualities that have made the California Spider a legend among classic car enthusiasts.