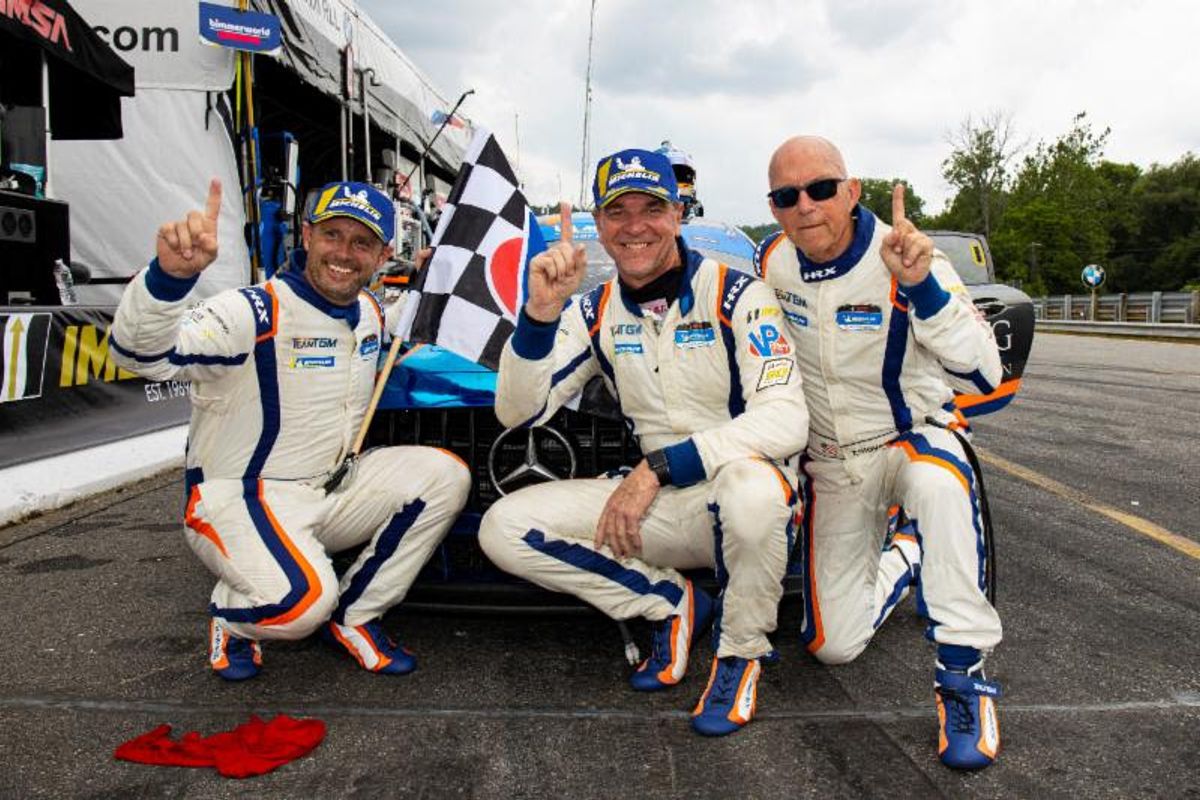 As they did one year ago, Team TGM had reason to celebrate following the IMSA Michelin Pilot Challenge race at Lime Rock Park.

In 2018, co-drivers Owen Trinkler and Hugh Plumb delivered the first victory for the team and owner Ted Giovanis in the No. 46 Mercedes-AMG GT4 at Lime Rock. The win was seemingly inevitable, as they collected top-10 finishes in each race before the event.

However, heading to Lime Rock this year, the No. 46 team had yet to score a top-10 result halfway through the season.

It was a disappointing start, especially as Trinkler and Plumb looked to defend their 2018 Grand Sport (GS) class title. Returning to Lime Rock provided the perfect opportunity to turn their misfortunes around, and that’s exactly what they did after two hours of racing on Saturday.

Trinkler kicked off the weekend in perfect style on Friday, earning his third Motul Pole Award of the year to start the race from the No. 1 spot and that’s where they wound up with the help of a timely caution and lapped traffic.

“Really it’s all about the Team TGM guys,” said Plumb. “It’s the team. I do a very small part of this. I was given a car by Owen Trinkler, the best in the business, and really just had to go out and do my job. My hat’s off to all the TCR guys. All of them stand on the gas and they’re absolute professionals. It really went our way today. I’m so happy for Mercedes, obviously Ted Giovanis, everything he provides to us, and the Michelin tire, what a great tire through and through.”

“It’s just the strategy Joe Varde, the engineer, did over this weekend,” Trinkler added. “We worked on long run pace. I’m just so happy for my guys. We’ve struggled a lot this year and we kept fighting together as a team. In those moments, things might kind of start separating, but we got stronger during that period and it shows now. We’re going to be a contender for the rest of the season. I knew that going in we had the keys to win and it’s good to come back to a place where we got two in a row.”

It was a narrow victory – just .377 seconds – over the No. 39 Carbahn Motorsports Audi R8 GT4 of Jeff Westphal. After a restart with 45 minutes remaining in the two-hour race, Westphal found himself seven seconds behind Plumb with several lapped cars between them.

Although he was able to close the gap on Plumb, Westphal had to defend his own position against Eric Foss in the No. 56 Murillo Racing Mercedes-AMG GT4. The podium would remain as is, with Westphal sharing driving duties with Tyler McQuarrie and Foss co-driving with Jeff Mosing.

With the runner-up result, Westphal and McQuarrie – who won at Sebring International Raceway in March – jumped into the GS championship lead with four races remaining. They’re just three points, 170-167, ahead of Devin Jones and James Clay in the No. 82 BimmerWorld Racing BMW M4 GT4, who finished fourth.

Leading the beginning of the race, Lewis gave way to fellow rookie Alex Papadopulos in the No. 3 KMW Motorsports with TMR Engineering Alfa Romeo Giulietta TCR – albeit for 16 laps – but by design to put the team in a better position later in the race.

“It’s always nice to put it on pole,” said Lewis, who earned his second Motul Pole Award of the season on Friday. “For the first stint before handing off to Mark, the Veloster N built by Hyundai was solid. It was just taking care of the tires because I didn’t really know what the pace was going to be like. I saw the Alfa behind me pushing hard, so I was wanting to let them go. I let him set the pace and then I could manage it from there.

“Thank you to all the fans for coming out to Lime Rock. It’s such a pleasure to race in front of such a passionate group of fans here.”

For Wilkins, it was last year’s winner Stephen Simpson looming large in his mirror, eager for another victory with co-driver Michael Johnson. In fact, Simpson momentarily took the lead in his No. 54 JDC-Miller Motorsports Audi RS3 LMS with 12 minutes remaining, but Wilkins quickly relegated him to second place where he and Johnson would ultimately finish for their best result of the season.

“We had a battle with some GS cars and I must say the competitors raced really hard and fair today,” said Wilkins. “Even that GS car, I had to stove it into (Turn) 2 and he could’ve turned in on me and it’s game over. But we had to take that risk to try and beat the Audi and it paid off. And he raced the Audi hard, so he gave the same to our competitors.

“I think all of our competitors raced us really fair and it was a lot of fun battling. This Lime Rock track was good to us today after a tough Canadian Tire Motorsport Park race and Michael did a really great job.”

Making it two Hyundai Veloster N TCRs on the podium for the first time this season was their Bryan Herta Autosport teammates Mason Filippi and Harry Gottsacker in the No. 21 machine. Both rookies in the series, the third-place finish was a career best for both drivers.

Lewis and Wilkins now lead the driver TCR championship standings with 168 points, jumping from third to first after the top two teams – the No. 37 L.A. Honda World Racing Honda Civic TCR of Shelby Blackstock and Tom O’Gorman (now 158 points), and the No. 61 Audi of Jonathan Morley and Gavin Ernstone for Roadshagger Racing by eEuroparts.com (154 points) finished 11th and 12th, respectively.

The IMSA Michelin Pilot Challenge travels next to Road America on Aug. 2-4 for the seventh round of the season. The Road America 120 goes green on Saturday, Aug. 3 at 4:05 p.m. ET and can be streamed live on IMSA.tv with IMSA Radio commentary.