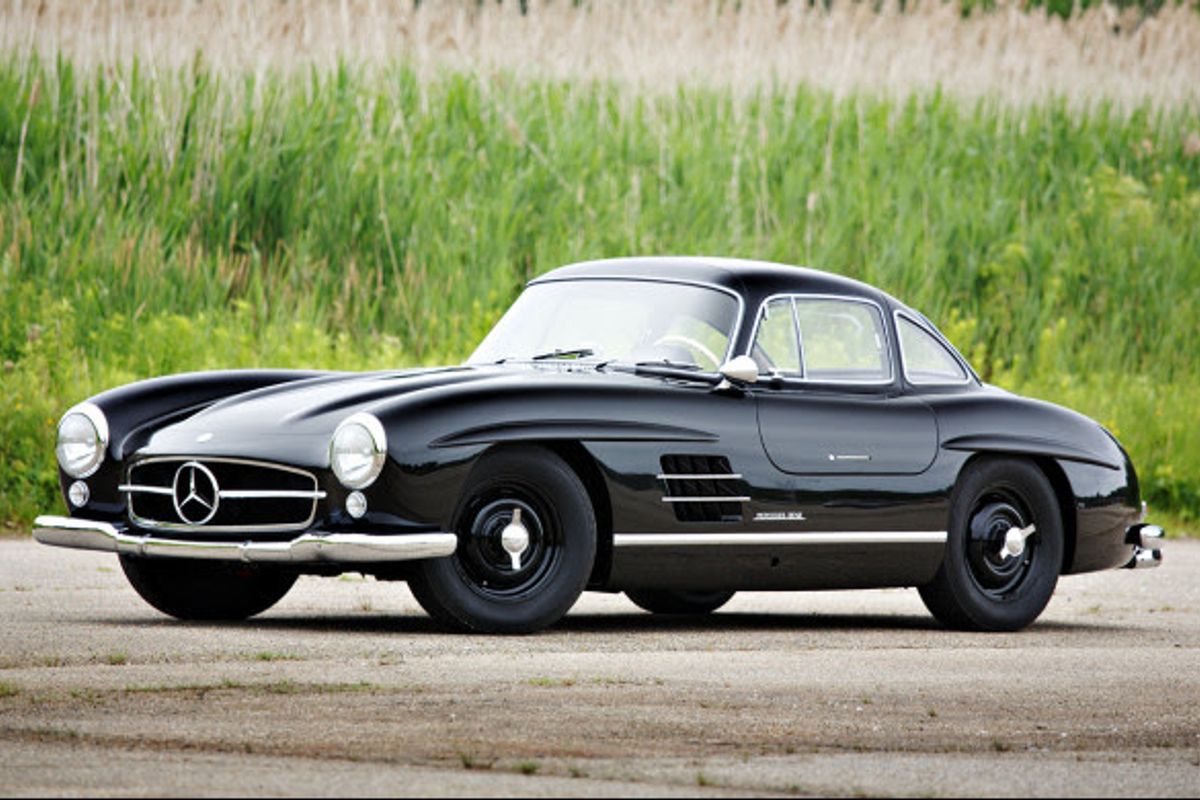 THIS CAR
This very special 300 SL Gullwing was completed at the factory in mid- March 1955 and shipped to the Mercedes-Benz authorized dealer in Caracas, Venezuela. Originally finished in Fire Engine Red (DB 534) over a gray leather interior, the Gullwing was delivered with Rudge knock-off wheels. The car was imported to the US by the early 1960s and was reportedly purchased by a young Mark Donohue, who, in later years would become one of the most successful and well-known racing drivers of the era. In addition to his many other accomplishments, winning the Indianapolis 500 in 1972 and piloting the famed 1,000-plus hp “Can-Am Killer” Porsche 917/30 were high points of his all-too-short career. Soon after his purchase of the Gullwing in the early 1960s, he had the car refinished to his liking, with black paint and a red leather interior which included the headliner. He also changed the car’s rear-end ratio to better suit his performance requirements.

By about 1965, Donohue sold the Gullwing to noted 300 SL enthusiast C. Jewett Henry of Huntingdon, Pennsylvania, where it joined two exceptional 300 SL Roadsters, a 190 SL, as well as another Gullwing. Following Mr. Henry’s passing in 1979, the cars were kept by his family in a state of static storage. Though they did receive basic servicing by the technicians at Paul Russell and Company, the group of 300 SLs remained in seclusion in a subterranean garage for over 20 years. It was not until the early 2000s that the Henry family made the decision to sell their late father’s collection, and the cars were sold to individual buyers over the next few years. In about 2004, East Coast collector Peter LeSaffre purchased the Gullwing via Paul Russell and Company, and, in 2005, began a major restoration with noted restorers Rare Drive Inc. of East Kingston, New Hampshire. The Gullwing was refinished in black paint with a matching black leather interior. The Rudge knock-off wheels were refinished in the body color, and the bumpers were fitted without over-riders, increasing the sleek, dramatic look of the all-black coupe.

As an early 1955 model, the Gullwing proudly and properly retains its rare concave-star grille, with its delicately constructed sweeping curves. Appropriate for a non-US delivery car, its European-specification headlights, with their larger glass diameter, are very pleasing to the eye and are ideally designed to complete the lines of the front fenders.

As Mr. LeSaffre’s interests shifted to more modern competition cars, the freshly restored 300 SL was sold to well-known motor sport enthusiast Bruce Canepa of Scotts Valley, California, in 2008. Soon thereafter, the Gullwing spent over a decade in a very significant Southern California collection where it saw occasional use and dutiful care.

Passing to the consignor earlier this year, the exquisite all-black Gullwing was returned to 300 SL expert Mark Allin at Rare Drive Inc. for a substantial mechanical and cosmetic freshening. A complete service was performed, including new axle boots, fluids, and a new clutch. It was then fully road-tested and sorted in order to address any mechanical issues. Keen observers will notice the Gullwing’s very slightly lowered stance over its Michelin XWX tires, which perhaps evokes its competition roots even more distinctly than other examples. As would be expected of a 300 SL at this level, owner’s manuals, a full set of bellypans, a tool roll, jack, fresh knock-off hammer, wooden wheel chock, and the side-window storage bag are all included with the sale. At the time of cataloguing, the coupe displayed just 26,499 miles.

Equipped with the more aggressive sport-cam, dual-point distributor, and a 4.11:1 rear end, this 300 SL was prepared to be as engaging behind the wheel as it is stunning to view. For any collector who has been searching for a very special Gullwing on an “I’ll know it when I see it” basis, the odds are quite good that this is the car.