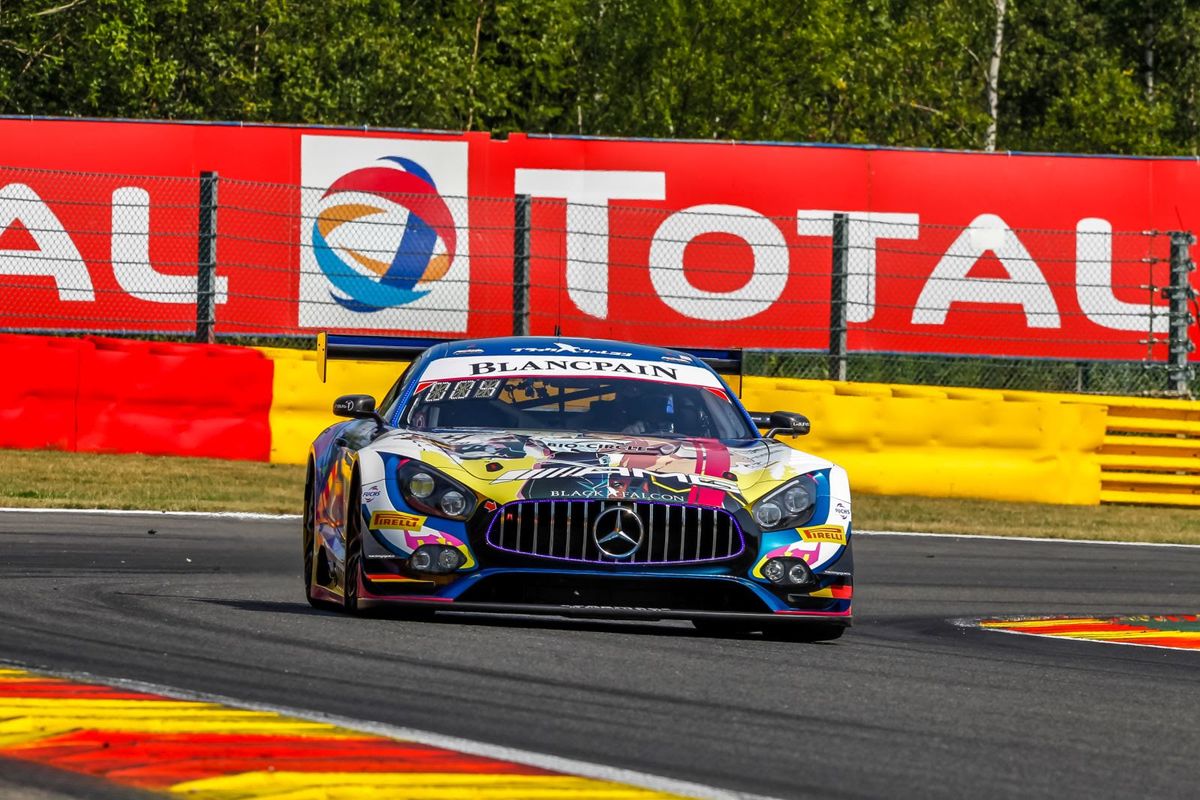 The German squad will enter the two-lap shootout among the favourites, but with a set of world-class GT3 competitors also booking a Super Pole slot the battle promises to be intense.

While the leading entrants will require one final effort to decide their starting order, positions 21 through 72 have been set for this year's Total 24 Hours of Spa. As such the class pole-sitters for Silver Cup, Pro-Am and Am Cup were decided tonight, bringing the race's 71st running a step closer.

The #4 Black Falcon crew of Maro Engel, Yelmer Buurman and Luca Stolz delivered a typically accomplished showing to secure provisional pole, with all three drivers finishing among the top-five in their respective qualifying sessions.

The reigning Blancpain GT Series Endurance Cup champions are among the strongest contenders to triumph on Sunday afternoon and confirmed this status by securing clean laps when it counted. Buurman's effort was particularly impressive, with the Dutch driver posting a 2m19.231s, the best time of the whole qualifying process.

The Black Falcon crew will be joined by a further pair of Mercedes-AMG squads, though it was the rival Porsche brand that secured the best Super Pole representation with all six of its Pro class cars making the top-20. Audi will also be out in force with four cars, while Aston Martin (3 cars), Ferraris (2 cars) and Nissan (1 car) will join them in the deciding session.

BMW will not be present, however, with its best-placed car securing 31st and reigning winner Walkenhorst Motorsport taking 35th. Bentley also narrowly missed the cut, with the #107 Continental GT3 just six-thousands shy of a spot in Super Pole, while Honda's sole Pro class car took 33rd.

Other significant absentees from tomorrow evening's session will be the #25 Audi Sport Team Sainteloc (22nd), the #63 Grasser Racing Lamborghini (24th) and the #88 AKKA ASP Mercedes-AMG (27th). Nevertheless, winning from outside the top-20 is an achievable feat at the Total 24 Hours of Spa.

For those that did make the cut, Super Pole will take place tomorrow at 19.05. Each crew will nominate just one driver, who will complete two flying laps of the 7km circuit. They will run in reserve order to their finishing positions in tonight's session, with the #20 GPX Racing Porsche going first and the #4 Mercedes-AMG Team Black Falcon completing the battle for top spot.

Silver Cup outfit Attempto Racing secured its third successive Endurance Cup pole in tonight's qualifying session, but it is safe to say that neither of the previous two were as significant as this. The #55 Audi R8 LMS does not yet have a definite grid position, having secured a place in Super Pole, but it will certainly be the class pole-sitter having emerged as the only Silver Cup car among the top-20 overall.

This in itself represents a remarkable achievement by the crew of Steijn Schothorst, Pieter Schothorst and Mattia Drudi, who were competitive with the overall pace-setters in each session on their way to seventh overall. Drudi will tackle Super Pole and, having posted the fourth-best time in his qualifying segment, will hope to secure an even better result today.

Ram Racing will be the leading Pro-Am car when the race gets underway on Saturday afternoon, with the #74 Mercedes-AMG crew of Remon Vos, Darren Burke, Christiaan Frankenhout and Tom Onslow-Cole taking 41st on the 72-car grid.

This result will see them start three places clear of their closest class contender and with two Silver Cup cars in between. It represents the first Pro-Am pole of the season for the team and was led by a stellar effort from Vos, who was 10th quickest overall in his qualifying segment.

Barwell Motorsport's #77 Lamborghini will be the leading Am Cup entrant as it goes in pursuit of a second successive Total 24 Hours of Spa class win. The car was second among its peers heading into the final session, with the #33 Rinaldi Racing Ferrari looking strong ahead of the deciding phase. But, when Patrick Kujala climbed aboard the Lamborghini, the Barwell crew hit the front as the Finnish driver completed a fine job by Adrian Amstutz, Leo Machitski and Richard Abra.

They will start 53rd overall on the 72-car grid, which will establish a new GT-era record when the 24 Hours begins on Saturday at 16.30.

Yelmer Buurman, #4 Mercedes-AMG Team Black Falcon: “The most difficult part was getting a clean lap. With 72 cars on-track it's a challenge. The team did a great job in sending me out at the right time and from that moment it was all about doing what I love: pushing as hard as possible. My teammates also did a fantastic job. Maro had some difficulties because of a red flag, but he still set a great time. Super Pole will require different tactics though. Qualifying is decided by an average time, so it's all about getting a good lap in without risking everything. Super Pole is different: you have to go and look for that last tenth, push 100 percent and basically do everything you can to try and get pole.”

Steijn Schothorst, #55 Attempto Racing Audi: “I think we can be really happy with our performance. I was a bit lucky, because I had a clear lap and was able to get a good time in to set P3 overall. That gave us a real boost of confidence. My brother was not so lucky and had some trouble in traffic, but he still managed a good time. Then Mattia did an amazing lap and was in P4 overall in his group. Even though we are already certain of pole in Silver Cup, we will definitely try to qualify as high as possible on the overall grid as well.”

Tom Onslow-Cole, #74 Ram Racing Mercedes-AMG: “In our category you're only as strong as your weakest link, and today we had no weak links. It was an incredible team performance, and credit to Remon Vos. This is his project and he did an outstanding job. He managed to battle at the front in his group, and we managed to do the same in ours. With the car having an overall grid position in the low forties, survival will be key. For the start that task will probably be on my shoulders, but I love this – it’s why we go racing. With so many cars on the grid, there is something very special about Spa.”

Leo Machitski, #77 Barwell Motorsport Lamborghini: “We only knew we had pole at the chequered flag because we really needed to make up a lot of time in Q4 – I think it was about 1.2 seconds. Combined qualifying is a good thing, because you don't get any Am Cup cars in positions where they shouldn't be, but with so many cars on-track it's difficult to find space. You really only have two laps to set your time, and you have to be lucky to find a gap. I think we have a very good line-up, but a lot still has to go right. Everybody who has done Spa knows that it is not enough just to have the fastest car.”