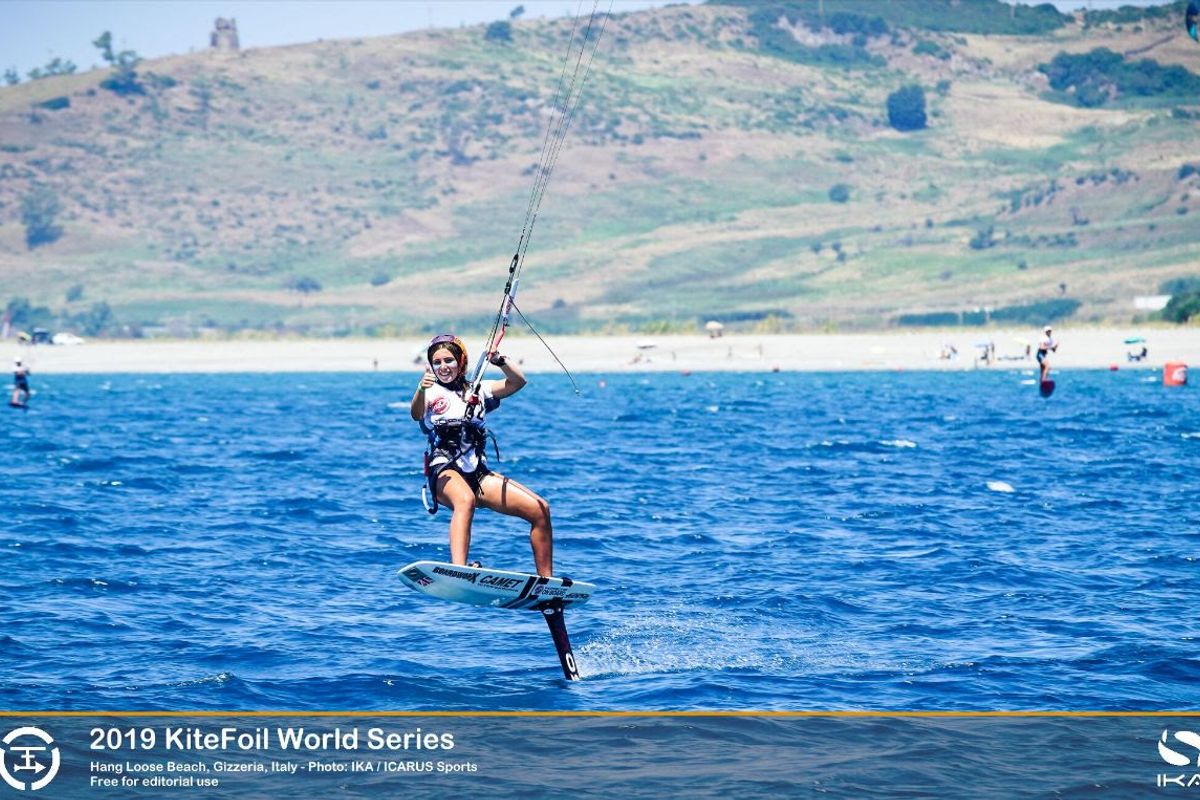 In what presented itself as a repeat of day one, Toni Vodisek extended his lead in the 2019 KiteFoil World Series Gizzeria while Nico Parlier and Guy Bridge made solid moves up the leaderboard.

For the second time in as many days, the Italian resort of Hang Loose Beach provided the 81 competitors on the first stop of the 2019 KiteFoil World Series with the ultimate in kitefoil racing conditions; flat water and a building sea breeze that slowly shifted right as the day progressed.

Day one leader Toni Vodisek from Slovenia stamped his authority on the regatta with three wins and a string of fourths to extend his lead over Frenchman Axel Mazella.

Three time Formula Kite World Champion Nico Parlier made a strong statement with a consistent day, moving up to third overall at the midway point of the event.

“I definitely had a better day today,” says Parlier “at least I hit less trash than yesterday. I tried to stay more consistent, I definitely had the speed but it just comes down to not hitting plastic. Those races are very long too, so we’re not really used to those long courses.”

Reinforcing the notion that nothing can make up for time on the water, Parlier admits he has not had the preperation he would like compared to previous years in which he set the benchmark in all forms of the discipline.

“I feel in my legs I don’t have the pressure that I used to. I’ve been working a lot on my physiotherapy course at university so I’ve been out of the water a lot compared to the last four years”.

Guy Bridge was the biggest mover of the day. With the regular top five finisher recording a string of placings in the ‘teens on day one, Bridge seemed to find his feet and lock into his new FlyMaax kite setup today, leading the fleet around the track on multiple occasions and finishing the day with four results in the top five.

“I think I felt it a bit more today, I felt a bit more confident. Something must have changed in my head to think that I can be at the top. Maybe yesterday I didn’t really feel like i was going well enough to get up there.”

26-year-old Brazilian Bruno Lobo secured his first race win on the professional circuit with a stand out performance in the penultimate race of the day.

Daniela Moroz from the U.S.A. continued her domination of the female division, extending her lead over Eleanor Aldridge and Elena Kalinina who are placed second and third respectively.

In the equipment race, Florian Gruber proved that Levitaz is on the right path with their foil development.

The German athlete won the final race on day one and backed it up with a huge win in the first race of day two.

While he admits “they [Levitaz] are getting closer”, there is still work to do before the next Formula Kite class registration period in 2020.

“Still our light wind is a bit better than strong wind but we are not far away. We have a modular system, it’s nice that you can choose the same front wing and use two different back wings to test on or just switching for a new front wing on the fuselage. It’s quite nice for testing and let’s see what we bring out next year, there’s still some time to go.”

Parlier is also on a new foil from California based Mikeslab, which is arguably the dominant foil manufacturer in recent years.

“We were trying the new mast from Mike, the new foil we’re still trying to figure out. Toni [Vodisek] is killing it with the old version so there is nothing crazy or groundbreaking.”

The 2019 KiteFoil World Series Gizzeria doubles as a stop of the Porsche On Board Trophy.

‘Porsche On Board’ is a four-event competition revolving around a variety of board-based water sports including surfing, kitesurfing, hydrofoil surfing, windsurfing, and SUP or stand-up paddle boarding. For more information, click here.

Full results are available at www.kitefoilworldseries.com