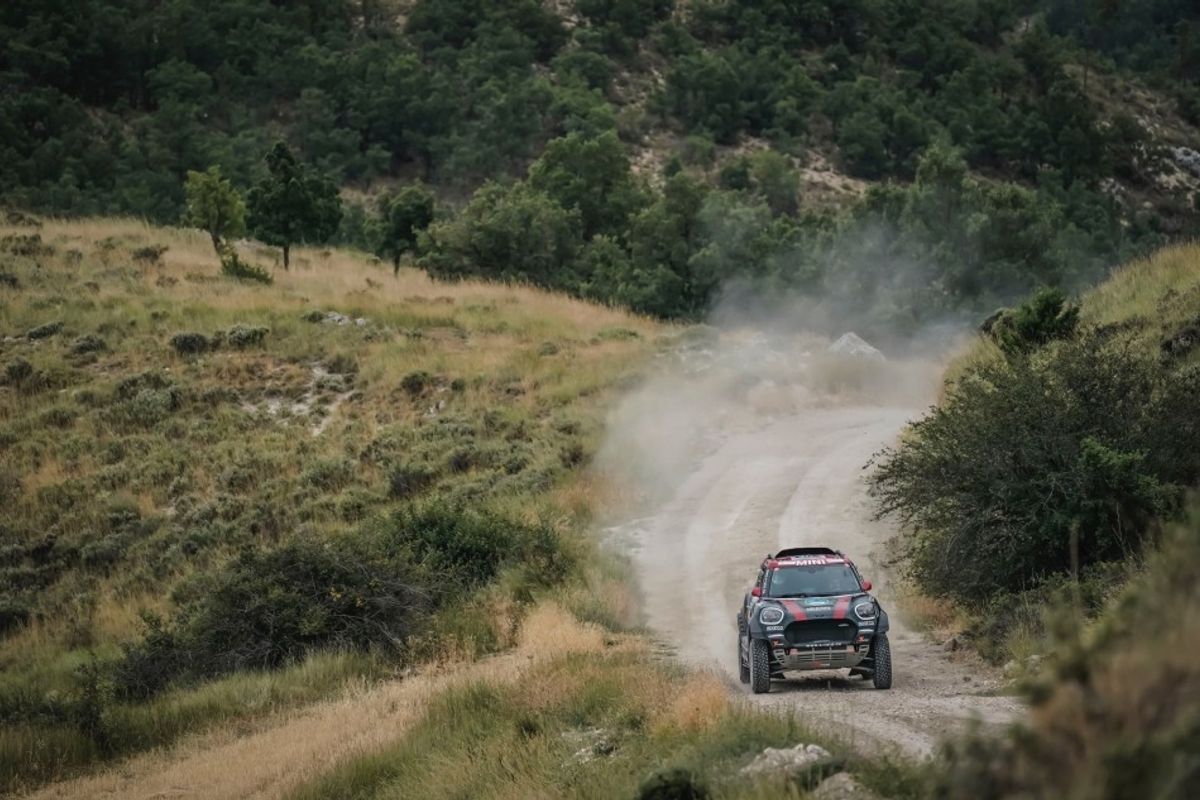 Orlando Terranova and Ronnie Graue have taken the lead of Baja Aragón after the opening day of competition, the Argentinean crew claiming both stage wins to top the leaderboard of the fourth round of the FIA World Cup for Cross Country Bajas by three minutes and 17 seconds. Martin Prokop and Jan Tománek moved up the standings this afternoon to hold second overnight with Jakub Przygonski and Timo Gottschalk taking the final provisional podium position.

The first of Baja Aragón’s two legs took the crews over two narrow and rocky stages, the longer at 164.78 competitive kilometres kicking off the action, followed by a shorter 86.74 kilometre section after a mid-leg service in Teruel. As can be common in the region, light rain fell in the first before a torrential downpour on the road section to this afternoon’s stage.

Terranova, fresh from victory on the previous Italian Baja, set the pace from the outset and claimed an early 41 second advantage in the Mini John Cooper Works Rally, despite a puncture. He then romped to another victory in the second section to pull out more than three minutes over his nearest rival. “After the puncture around the 50 kilometre mark in the first stage we tried to push but the bonnet came loose and then flew off,” he said. “It was a nice stage though, technical, and the car was good although we had to be careful with the brakes. The second stage was good for us, no punctures. It was quite muddy in the middle, but the first day is done and I’m happy.”

Prokop has moved up the leaderboard from fourth to second, spoiling an early 1-2-3 for Mini. The Ford driver’s fourth and third positions on the two stages put him behind Terranova but now in the midst of a tight battle for the podium places. “I didn’t get the best rhythm and the brakes were overheating in the first section. We moved into second with better balance this afternoon and I enjoyed the stage. Tomorrow there will be a big fight and I expect a lot of pushing from everyone, but I’m happy for the moment,” said the Czech who towed a stricken Vladimir Vasilyev from the end of the final stage back to service.

Przygonski holds third overnight, five seconds adrift of Prokop after dropping from second with a puncture in the last section. Like team-mate Terranova, he too lost the bonnet in the day’s opener. “Other than this it was a good stage for us; technical, demanding and narrow with a lot of stones on the side,” said the Pole. “The second stage was nice with good traction, but we had one puncture and lost around two minutes, dropping us a position.”

Joan ‘Nani’ Roma and Alex Haro, in a third Mini, had a great start and were set to take the first stage win until catching Bernhard Ten Brinke 50 kilometres before the end of the section and losing time in his dust. “Otherwise we had great pace,” said the Spaniard, despite a gearbox problem. “We lost second gear at the end of the first stage but couldn’t do anything about it in service. I tried to keep the speed in the second section but it was tricky on the narrow stage and we got one puncture,” concluded the fourth placed Spaniard who is now competing on his home Baja for the 21st time, having won five times in cars and four on a bike.

Ten Brinke and Tom Colsoul are 42 seconds further adrift in fifth in the lead Toyota Hilux Overdrive. The Dutch/Belgian pair had a tricky morning that saw them finish fifth, one minute 17 seconds adrift, but they bounced back in the afternoon, second on the stage to maintain the position but close the gap. “About 60 kilometres into the first stage we lost the pressure on the brakes and then when we went through a watersplash there was a big bang and the front left disc broke, so it was difficult for the rest of the stage,” said Ten Brinke. “We didn’t see Nani [Roma] behind with the dust; I’m sorry for him. This afternoon it was good, no mistakes, but we didn’t push too hard because it can be tough on the brakes. Through a watersplash the steering went a bit out, but we really had no issues and I’m happy with P2 on the stage.”

João Ramos and Victor Jesus, in another Toyota Hilux, hold sixth after the opening leg. Sixth and fourth positions in the two stages see the Portuguese crew just under six minutes adrift of the overall lead, after losing time in the first stage. “It was a very good one, but could have been better if we hadn’t got stuck behind Novikov, which lost us about a minute and a position on the leaderboard,” said Ramos.

Current leaders of the FIA World Cup for Cross Country Bajas, Vladimir Vasilyev and Konstantin Zhiltsov, had a difficult day, finishing seventh, and only made it back to the service park this evening thanks to Prokop’s tow. “In the first stage we had a puncture after 80 kilometres, a rock was hidden in a small river,” said last year’s winner. “In the second, about 10 kilometres before the end, the gearbox was destroyed, we had just one gear. At the finish we put it into neutral and then had nothing but reverse gear. Martin [Prokop] towed us back to the service, so thanks to him.”

Luis Recuenco/Victor Alijas, Benediktas Vanagas/Sebastian Rozwadowski and Fernando Alvarez/Juan Monasterolo hold eighth, ninth and 10th respectively. In the T3 category Santiago Navarro and Dani Oliveras fly the flag for Spain and hold a slim 10 second advantage over the Russian crew of Alexander Dorosinskiy and Dmitry Pavlov. T2 is being led by Nuno Corvo/José Martins in a Nissan Pathfinder, the Portuguese crew 15 seconds ahead of João Ferreira/David Monteiro with one stage win apiece.