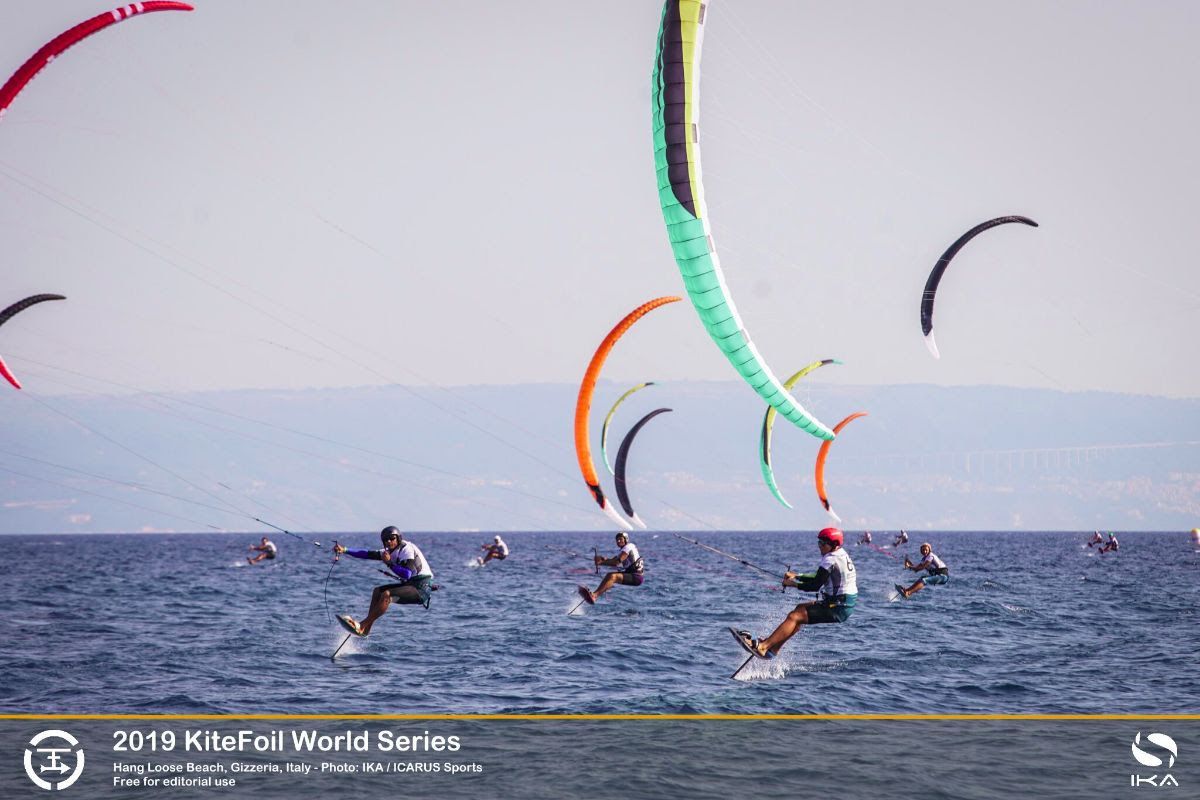 The question on everyone's mind must surely be ‘What is Toni Vodisek eating for breakfast?’ Five races were completed on the penultimate day of competition at the 2019 KiteFoil World Series Gizzeria in the south of Italy.

While both Connor Bainbridge (GBR) and Nicolas Parlier (FRA) secured a victory apiece, it was the third day in a row in which current regatta leader Toni Vodisek notched up three bullets to extend his lead to 17 points.

The 19 year old has shown glimpses of his ability in the past however his lack of consistency has always been his achilles heel.

This appears behind him now, showing blistering speed and an unwavering ability to keep the board under his feet. Second placed Axel Mazella (FRA) knows he has a challenge ahead of him if he wants to catch the flying Slovenian.

“I don’t know how I can catch Toni,” laughs Mazella. “We both made a lot of mistakes but he has a very high speed. Even if he made some mistakes he can get to the top as he wants.”

While the top three placings are dominated by seemingly the same Ozone kite & Mikeslab foil combination, the choice of size appears to be making a difference.

His ability upwind to control the extra power provided to him by the larger kite translates into a significantly higher VMG downwind.

This opens a plethora of passing opportunities over the short, 15 minute race for which Vodisek capitalised on multiple occasions.

Racing began in a similar fashion to the opening two days of the regatta, with race one starting in a building sea breeze.

As the leaders headed downwind on the final lap the breeze dropped to a whisper and a large contingent of the fleet was unable to finish before their kites fell from the sky.

Following the extended postponement ashore, racing restarted with a more westerly breeze and a course allowing for much more tactical racing.

Mazella was just one of the sailors able to capitalise on the available passing lanes in the latter races, splitting with the leaders at the leeward gate in the final race and climbing back to a second place finish from a seemingly impossible position to keep his title hopes alive.

While the pressure is firmly on Vodisek, his consistent results mean that even with no further discards to come in the regatta, he will need two bad results to give Mazella and Parlier a fighting chance of reeling him in.

“We are dealing with a low pressure coming in so we are not going to have a sea breeze. We know that it’s going to be raining somewhere and it could be really shifty. When it happens like this we have the sea state getting rough pretty quick also. Most likely it will be difficult to get five races in.”

With such a commanding lead and an unpredictable forecast, many sailors strategy would be to play it safe.

Vodisek has other ideas.“I want to win," he states unequivocally. "Slovenia is really small, it has 2 million people. I want everybody to see that we are good sportspeople and if we put our minds to something, we can do it.”

The schedule for the final day of the 2019 KiteFoil World Series Gizzeria has been brought forward to a 10:00am start.