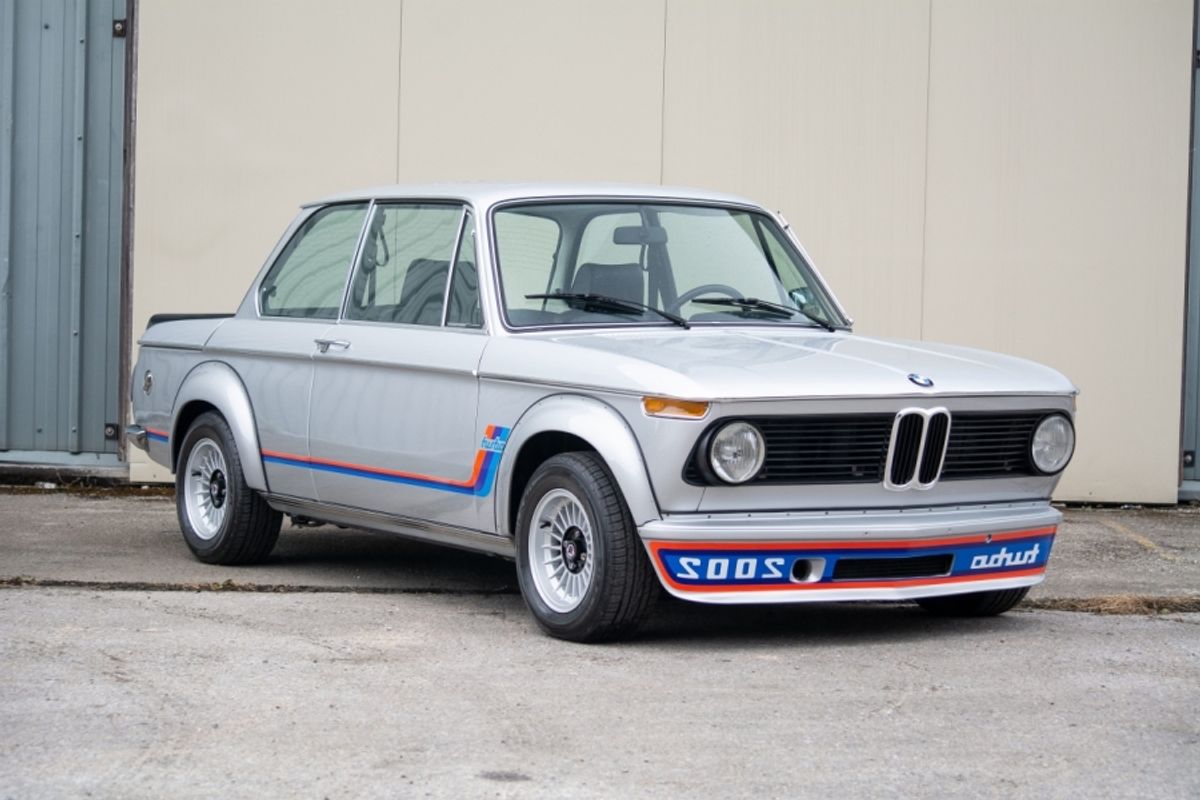 Delivered new to BMW dealer Hammer in Monchengladbach, West Germany on 30/08/1974 in Polaris Metallic
The car spent approximately 20 years in Spain before being registered in the UK in April 2015
Sent to Lloyd Colne BMW in Lancashire to be repainted and a complete engine rebuild
Just over 7,000 miles indicated and has resided in a private collection since 2016
Prior to the sale, it will have an oil/ filter service, fluids, freshly MOT'd, road tested, and inspected

The 2002 Turbo was launched at the 1973 Frankfurt Motor-show and was Europe's first turbocharged production car. With an output of 170bhp and 240Nm of torque, it was the fastest BMW yet produced, pinching that mantle from the superb 2002 Tii. Only produced in late 1973 and 1974, there were just 1,672 built, all in left-hand drive and sadly, very few survive today. Replaced in 1975 by the ubiquitous '3' series, it was the last model to be introduced by BMW whilst they were still regarded as a specialist low volume niche manufacturer.

The 2002 Turbo is easily distinguished from any other 2002 by its body-colour front spoiler, black rubber rear spoiler, riveted wheel arch extensions, and most cars were further fitted with Motorsport stripes on the front spoiler and sides. However, underneath the surface there are more subtle changes. The front chassis rails are heavier, the floor areas around the rear suspension mounting points are thicker, the quarter panels are cut out for the flares, the outer rear wheel housings are larger, the boot floor is different to accommodate a larger spare tire and special 70-litre fuel tank, and the nose panel is unique. The original style of Motorsport stripes featured the word "turbo" in reverse on the front spoiler, designed so that drivers could see the word clearly in their rear-view mirror as the Turbo was quickly approaching. However, the German government considered this to be too aggressive and BMW was quickly pressured into changing to a different style without any kind of turbo script on the front spoiler.

This 1974 Turbo was originally delivered to BMW dealer Hammer in Monchengladbach, West Germany on August 30th 1974 in Polaris Metallic, paint code 060 and there is a confirmation email to this effect from BMW Classic. Further documentation in the history file would suggest that the car spent approximately 20 years in Spain before being registered in the UK in April 2015. At this point it was sent to Lloyd Colne BMW in Lancashire to be repainted and a complete engine decoke and rebuild including a new clutch assembly, in exchange for a little short of £10,000. The odometer currently reads 7,001 miles which is believed accurate but can't be fully warranted as the instrument reads in MPH and it would probably have been fitted with a KPH speedometer from new. Certainly there is an inspection document in Spanish in the file dated September 2014 and documenting 4,222km. It's a bit academic, really, as the condition of the car is incredible.