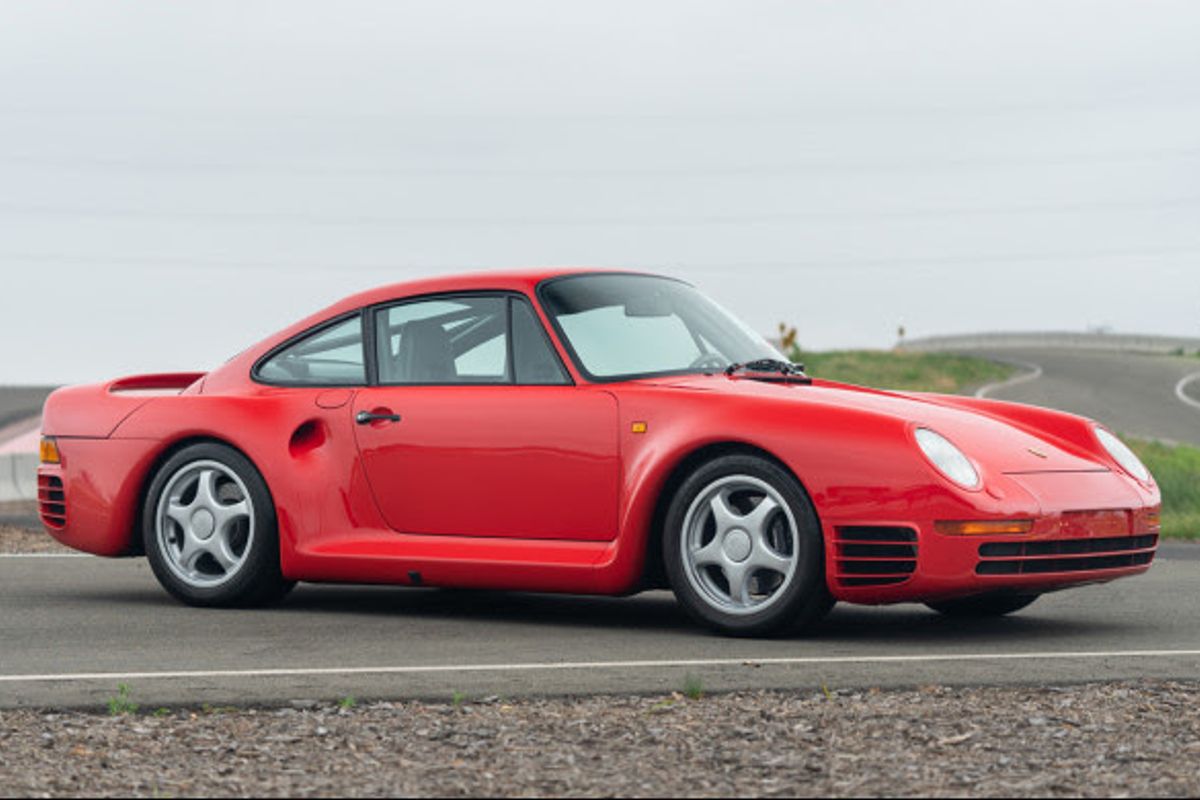 THIS CAR
One of the most daring, iconic, and influential sports cars of all time, the 959 was born from chief engineer Helmuth Bott’s mission to build a “Super Porsche.” Envisioned as the 911 of the future, the 959 was a technical tour de force – designed and constructed regardless of expense. Not only did this model redefine expectations for road-going supercars, its motor sports record was equally significant. In 1986, competition variants captured a 1-2 finish at the Paris-Dakar Rally and finished 1st in Class at Le Mans – a testament to the strength and versatility of the 959 platform.

Of the 337 examples built, the majority were Komfort models; only 37 Sport models were produced. Of these, eight were built for Rest of World markets, with the remaining 29 produced for North America. Intended as a dual-purpose car for purists, the Sport featured conventional coil-over suspension and was equipped with a fully integrated, leather-covered roll cage, Autoflug harnesses, and cloth upholstery. In keeping with its focused character, the Sport was stripped of air-conditioning, sun visors, rear seats, and many other amenities, shaving off 220 pounds. Three decades after its introduction, the 959 Sport is still regarded by many as the perfect supercar and the standard by which the latest Porsches are judged.

This particular example’s history can be traced to 1985, when Otis Chandler, the well-known car collector and then publisher of the Los Angeles Times, wrote a letter to Peter Schutz, president and CEO of Porsche AG, requesting that he be considered for one of the new 959s. He was advised to contact Al Holbert, director of Porsche Motorsport North America, who would be handling orders and delivery of the new cars. Chandler remained in regular contact with Porsche over the next two years. In November 1987, he wrote to Holbert expressing his desire to order a red 959 Sport, noting that he would like the last serial numbered car of the 25 scheduled for the US.

Unfortunately, the entire project faced considerable bureaucratic red tape, and it wasn’t until 1989 that Chandler was able to take delivery of his $336,000 supercar. Although this example took four years to arrive, Porsche remained true to its word – Chandler’s car was chassis 030, the last serial number, and it was finished in Guards Red, one of just two colors offered for the model.

It is believed that this 959 Sport was the first example to legally enter the US. It was imported under a special museum exemption, which required that it never be driven, raced, titled, or licensed, with fluids drained to prevent errant usage. Over the next decade, the car remained a fixture in Chandler’s Vintage Museum in Oxnard, California, where it was displayed alongside two other 1980s supercars – a Ferrari 288 GTO and Lamborghini Countach.

Throughout his ownership, Chandler made various attempts to register the Porsche in California. Finally, in February 2000, following the passage of the Department of Transportation’s show/display exemption, the 959 Sport was sent to Bruce Canepa, who worked with Northern California Diagnostic Laboratories, to make the car emissions compliant. This three-year effort was documented in Autoweek magazine, which featured this 959 on the cover of its September 15, 2003, issue.

In November 2004, Chandler decided to part with the 959 and sold it to Geoffrey Escalette, a Porsche collector and racer in Costa Mesa, California. The car remained in his care for several years before being sold to the current owner, another Southern California-based collector with a stable of important Porsche road and racing cars. In the consignor’s ownership, Porsche Motorsport North America was commissioned to rebuild the engine and to address any required maintenance. Invoices are included in the car’s file, and the 959 has seen minimal use since the work was completed. At the time of cataloguing, the odometer displayed just 4,955 miles.

Today, the 959 presents in outstanding condition and is accompanied by its factory tool roll, jack kit, emergency road equipment, driver’s manuals, workshop manual, and even its original, unused option sticker. In addition to these accessories, the Porsche is offered with an extensive file of documentation that includes the original 1989 purchase agreement and sales invoice, voluminous correspondence (much of it between Chandler, Holbert, and Porsche), and period photos. Also included are a technical data manual, a collection of factory literature, and articles relating to the model.

Without question, this 959 Sport is among the most complete and thoroughly documented examples extant. Its history is a fascinating insight into the extraordinary nature of the 959 program, Porsche’s drive to create the ultimate 911-based supercar, and the incredible effort undertaken on the part of collectors like Otis Chandler, who seemingly turned over every stone in the quest to own and drive one of these exotic machines.

Although many of the barriers to 959 ownership have been broken over the past three decades, the model’s rarity and important role in Porsche history ensure that it remains as exclusive as ever. There are no more collectible or sought-after 959s than the 29 US Sport models, which possess a distinctive character and appeal all their own. This brilliant example, with its outstanding provenance, limited mileage, and rich documentation, is among the very best of them.