Ferrari Sergio: 1 of 6 production examples built, to cross the block at Pebble Beach 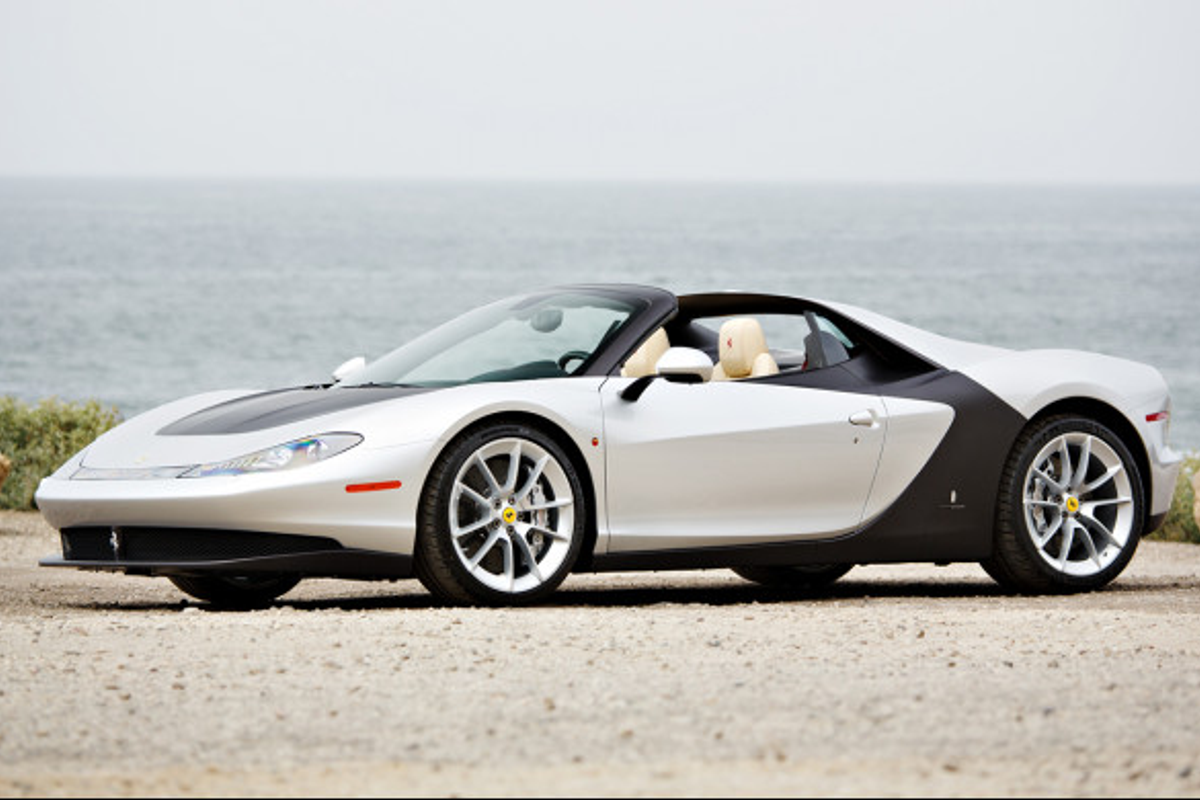 THIS CAR
The overwhelming success of Pininfarina over its long history can doubtlessly be attributed to the company’s consistent identity through three generations of family ownership and operation. Battista “Pinin” Farina passed control of his eponymous company in 1966 to his son, Sergio, who in turn passed it to his son, Andrea, in 2001. A designer like his father, Sergio Pininfarina was a central force in the creation of many of Ferrari’s great models, from the Dino Speciale show car of 1965, to eight-cylinder cars such as the 328 and 360 Modena, to the celebrated F40 supercar.

Following Sergio Pininfarina’s passing in July 2012, a decision was made to honor the company scion with a tribute car. At the Geneva salon eight months later, Ferrari unveiled the Pininfarina Sergio, the latest in a run of specialty one-offs from Grugliasco that included the Ferrari 612 Scaglietti K, the Ferrari P4/5, and the Rolls-Royce Hyperion.

Utilizing the chassis and mid-engine architecture of the concurrent Ferrari 458 series, the Sergio was most notable for coachwork and interior styling fashioned by Pininfarina. Mimicking a boat, in an apparent nod to the early Ferrari Barchettas, the Sergio’s carbon fiber coachwork lacked a roof or windshield, though a theoretical smart windshield was imagined to deploy at 30 mph. The C-pillars stretched forward into a floating canopy over the rear cockpit, providing a rollover structure and support for floating headrests that were detached from the seats. A two-tone paint design further emphasized the boat motif while lending accents to the aerodynamic bodywork, which had been perfected in the coachbuilder’s wind tunnel.

In October 2014, Ferrari approved the Sergio for limited production, in part to honor Pininfarina’s upcoming 85th anniversary. When the first production example debuted at the Geneva salon in March 2015, two years after the prototype was shown, it was clear that several of the concept car’s features had changed.

For safety and comfort reasons, the production Sergio was equipped with a standard windshield, but the original show car’s surface detailing was retained, as was the complementary paint and upholstery design. The Sergio was built on the chassis of the 458 Speciale Aperta, and therefore retained most of that model’s advanced mechanical elements, including a mid-mounted 597 hp V-8, and a seven-speed dual clutch paddle-shifted transaxle. The removal of the Aperta’s electronically operated retractable hardtop reduced weight and further lowered the Sergio’s center of gravity, translating to even greater performance capabilities.

Following in a long tradition of limited-edition Ferrari premium models, Sergio production was limited to just six examples, all of which were pre-sold to preferred customers at a price of nearly $3 million. The expressive model is an appropriate tribute to the influential Sergio Pininfarina, who oversaw and informed the coachbuilder’s transformation from a boutique 1960s-styling company into a sophisticated 21st-century design contractor.

Chassis 205934 benefits from fastidious care and minimal use over the last five years, offering a showroom-quality example of the hyper-rare Sergio. Finished in Argento Nürburgring paint over a cream leather interior with red seat inserts, this Sergio was delivered new to the consignor, a European racing driver and highly regarded collector who has driven in the 24 Hours of Le Mans several times. While being dutifully maintained, the Ferrari enjoyed the company of several other rare important sports cars in the consignor’s collection. In early 2019, the Sergio was notably displayed in the lobby of the Petersen Automotive Museum in Los Angeles.

Currently displaying 78 miles, this exquisite Sergio would make an exceptional acquisition for any collector, particularly suitable for hypercar enthusiasts, Ferrari limited edition completists, or Pininfarina aficionados. One of only six built, the sensational and unique Sergio may be enjoyed on the open road, displayed prominently within special collections, or presented publicly at major events as a fitting tribute to the beloved and noteworthy Sergio Pininfarina.