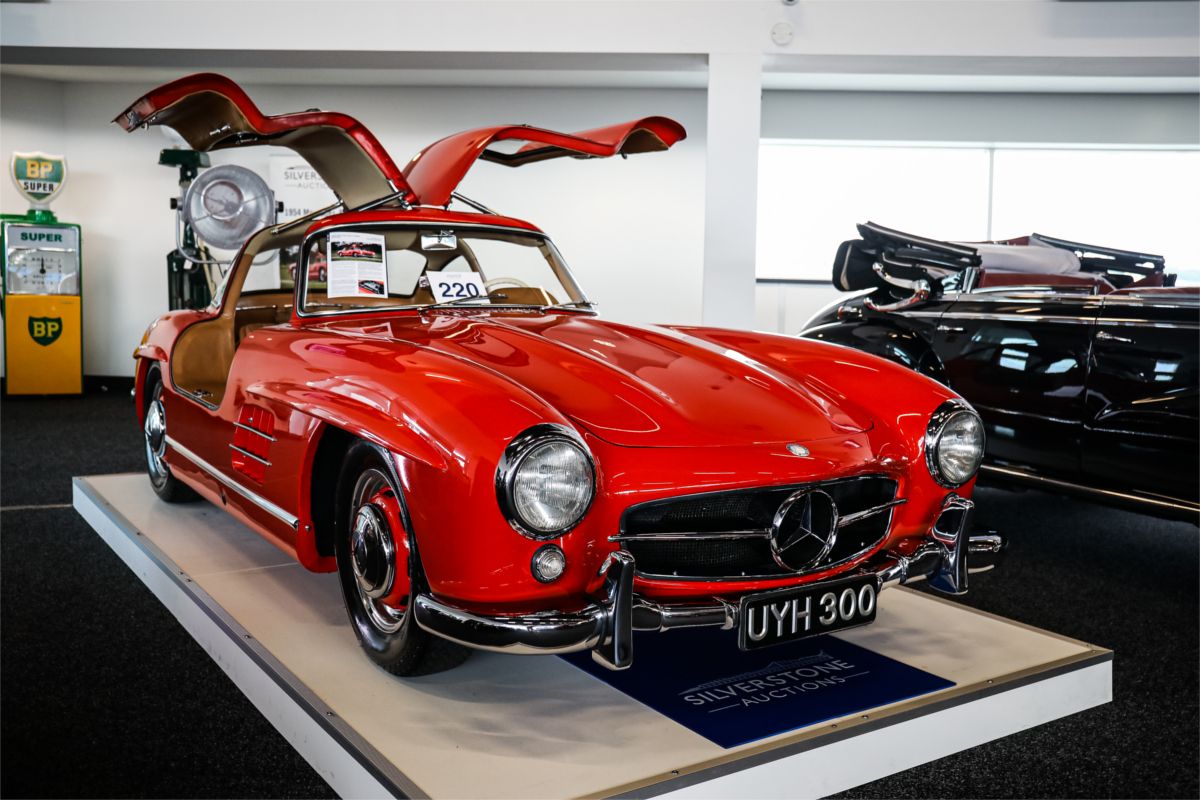 1954 Mercedes-Benz 300 SL Gullwing tops the sale at £832,500
The Silverstone Classic sale which took place at the historic race meeting last weekend saw a packed auction room which achieved an excellent sale rate of 74% (excluding competition cars) with £6.4 million worth of sales overall.

The big story of the sale was the 1954 Mercedes-Benz 300SL Gullwing and the 2010 SLS AMG, a new home found for the collection of cars owned by the late Barrie Whizzo Williams and all the cars from the Gentlemans’ Collection selling well with some stand out achievements.

The Mercedes-Benz Gullwing which had attracted lots of interest in the lead up to the sale achieved £832,500. The new vendor was so delighted that he also bid on and successfully purchased the 2010 Mercedes-Benz SLS AMG for £203,625, therefore having both the earliest and latest of gullwing doored cars.

No place was more appropriate than Silverstone to be selling the collection of cars and kart of the late Barrie Williams. Whizzo who was loved by many in motorsport and would be delighted that his Fastkart, trailer and moped, Lancia Fulvia and Mini Cooper S all found new homes. The Mini sold for £65,250, the Fastakart £3,600 and the Lancia £39,375.

The second collection that was on offer, A Gentlemans’ Collection of No Reserve, attracted lots of interest with all cars selling very well. Several cars achieved more than their estimate, the Ferrari Testarossa stood out achieving £99,000, the 1974 BMW 2002 Turbo sold for £70,874 and the rare Lancia Delta HF Integrale Bianco Perlato selling for £65,563.

Harry Whale auction manager for Silverstone Auctions commented: “We had a fantastic sale this weekend and with such a superb catalogue of lots we are delighted with our achievements.”

“The two collections on offer had some wonderful cars and having a collection, all at No Reserve, really does get the auction room buzzing.”

“Silverstone Auctions were delighted to have been chosen to auction Whizzo’s collection and the new owners of his various cars all have an important part of history from a British motorsport legend.”

The automobilia sale held in the morning attracted lots of interest too, with an array of items for collectors and enthusiasts with something to suit everyone on all budgets. One of the stand-out lots was Lot 120, the McLaren 3- piece luggage set from the McLaren F1 road car chassis No 33 which sold for seven times its estimate at £7,200.

Another of the lots a set of traffic lights in full working order and with a remote control sold for £750. This type of item is always very popular and an excellent item for set dressing.

Day two of the auction also proved to be a great day of sales with an early lot, the 1978 VW Beetle, one of the last off the German production line and only 81 miles selling for £39,938. Following not long after, the 1958 Aston Martin DB2/4 Mk3 topped out at £164,250 and then for something little more current a 1995 Ford Escort Cosworth Motorsport, one of the very few genuine factory-built cars fetching an incredible £68,063.

One of the highlight lots of Sundays’ sale was the Aston Martin DBS V8 press car offered directly from the actor and comedian Steve Coogan which was presented in beautiful condition and sold for £151,875.

The following lot, No 422 the 1988 Rouse Ford Sierra RS500 Cosworth Group A, a legendary competition car and one of the most successful in touring car racing sold for £170,000

A 1991 Porsche 928 GT in manual which is in superb condition sold for £67,500 with the following lot the 2018 Ferrari California T 70th Anniversary Edition attracted lots of interest and bidding, selling for £270,000

As with Saturdays automobilia sale, there were plenty of lots available to suit everyone with the 1950s Beckmeter M50 petrol pump which had just recently been restored sold for £3,240. Luggage sets are popular additions for classic car owners and Lot 357 the Testarossa 6-piece Schedoni luggage set sold for £5,400. In total automobilia achieved a total sale rate of 75%

Harry Whale summed up the weekend: “With an overall sale rate of 67% generating £6.4 million and classic cars alone achieving 74%, we are delighted with the weekend and to set industry-leading results in the current market conditions.The next auction is The Porsche Sale and a Sale of Ferraris at the Dallas Burston Polo Club with entries still being invited. If you are interested in consigning your car, talk to one of the team who will help you through the process of selling your car.