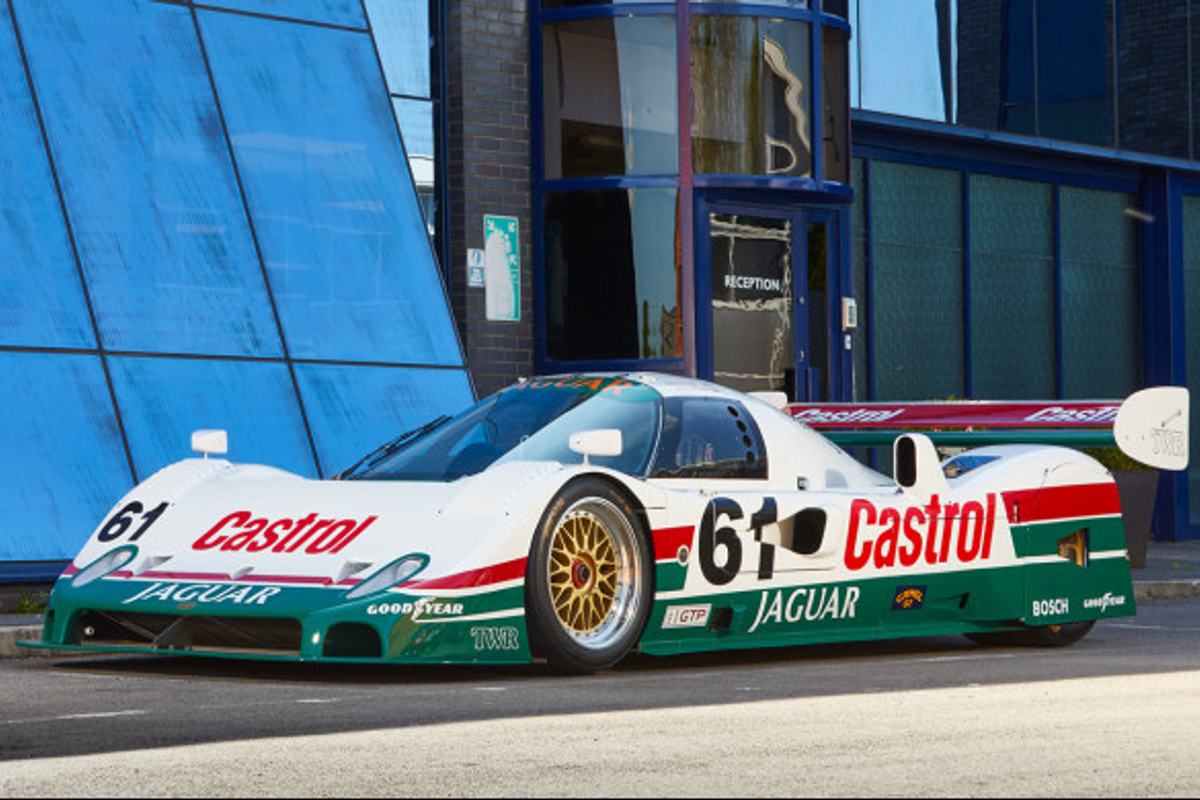 THIS CAR
Although TWR/JaguarSport won the 24 Hours of Le Mans and secured its second consecutive World Sportscar Championship for Jaguar in 1988, team boss Tom Walkinshaw recognized significant changes would be required for continued success. Chief among those was a new twin-turbocharged DOHC JRV-6 engine, loosely based on the MG/Rover 6R4 Group B rally car, as Jaguar’s new racing powerplant. Displacing 3.5 litres with the XJR- 11 for FIA Group C/WSC events and 3.0 litres for the XJR-10 aimed at American IMSA GTP, the new JRV-6 was both smaller and lighter than the prior V-12 and allowed Tony Southgate to pen a slimmer, more-aerodynamic carbon fiber monocoque for both the 650 hp XJR-10 and its 3.5-litre, 750 hp XJR-11 stablemate. Bodies were specific to each, with the WSC XJR-11 optimized for all-out speed and the IMSA-specific XJR-10 designed for greater downforce on shorter North American circuits.

Three XJR-10s – numbered 389, 489, and 589 – were constructed and campaigned in North America by the Jaguar IMSA team, which was headed by Tony Dowe and Ian Reed in Valparaiso, Indiana, with Castrol as the major sponsor. This example, chassis 389, was the first to compete for the IMSA championship. The effectiveness of the new Jaguar race cars was quickly proven. At the XJR-10’s debut on May 29, 1989, at the IMSA series race at Lime Rock, Connecticut, Jan Lammers qualified 389 on the front row and finished second, just eight seconds behind Geoff Brabham’s race-winning Nissan.

Two DNFs followed for 389 in the 1989 series, with Lammers and Davy Jones classified 16th in June at the Mid-Ohio 500 km because of cooling difficulties; and Lammers classified 16th in July at the Watkins Glen 500 km after a puncture. At the next IMSA series race, the Miller High Life 500 at Road America, Lammers and Price Cobb qualified 2nd and finished 2nd. Two weeks later, they qualified on the pole and won the 300-km G.I. Joe’s Camel Grand Prix at Portland, Oregon. Subsequent 1989 outings offered mixed results, with Jones classified 25th on September 3 at the San Antonio 2 Hours race, Cobb and Lammers taking 4th Place at Sears Point in California one week later, Lammers finishing 9th at Tampa, Florida, on October 1, and a season-ending victory for Lammers at the Del Mar 2 Hours in California, which secured Jaguar’s 2nd Place result in the 1989 IMSA championship standings.

For the 12 races in the 1990 IMSA GTP season, Jaguar XJR-10, chassis 389, finished in the top 10 eight times, including one victory that season – the May 28 150-lap event at Lime Rock with Cobb and John Nielsen co-driving. Those two drivers went on to add two more podium finishes, placing 2nd at the Road Atlanta 500 km on April 1 and taking 3rd at the West Palm Beach 3 Hours on April 22. Unusually long-lived in frontline racing, 389 was used for two more outings in 1991, when it competed under Bud Light sponsorship. Driving 389 was 1987 World Sportscar Championship-winning driver Raul Boesel, who finished 19th at the West Palm Beach 2 Hours on March 3 and then, fittingly, drove this car to victory in its last-ever IMSA GTP race at the Miami 2 Hours on April 7. Following retirement from frontline IMSA competition after the 1991 racing season’s end, this XJR-10 remained with TWR/JaguarSport until 1999, when it was acquired by Don Law Racing of Staffordshire, England. A renowned Jaguar racing and engineering expert with deep ties to both TWR and Jaguar itself, Don Law campaigned the car to great effect in Historic Group C events from August 2001 through July 2005, with Justin Law driving 389 to 17 podium finishes, including 10 wins, at high-profile venues including Brands Hatch, Donington, the Goodwood Festival of Speed, Monza, Silverstone, Spa, and Zolder. Next, the XJR-10 was acquired by a private owner and later sold to the consignor in 2015. Since that time, the car has been fully restored by noted Jaguar specialist Richard Eyre to prepare it for future competition use.

Successful on the track at inception, this XJR-10 has benefited from proper care and maintenance since it was first built, with meticulous attention and knowledgeable ownership from a limited roster of owners. While the “glory days” of IMSA GTP and FIA Group C are long gone, these series thrilled fans with some of the greatest racing cars and most skilled drivers ever to grace the world’s legendary circuits. Accordingly, the acquisition of this XJR-10 would place the buyer in elite company and provide uncommon opportunities to share in this rich tradition.