Oman Air flies past Alinghi in light airs of Palma 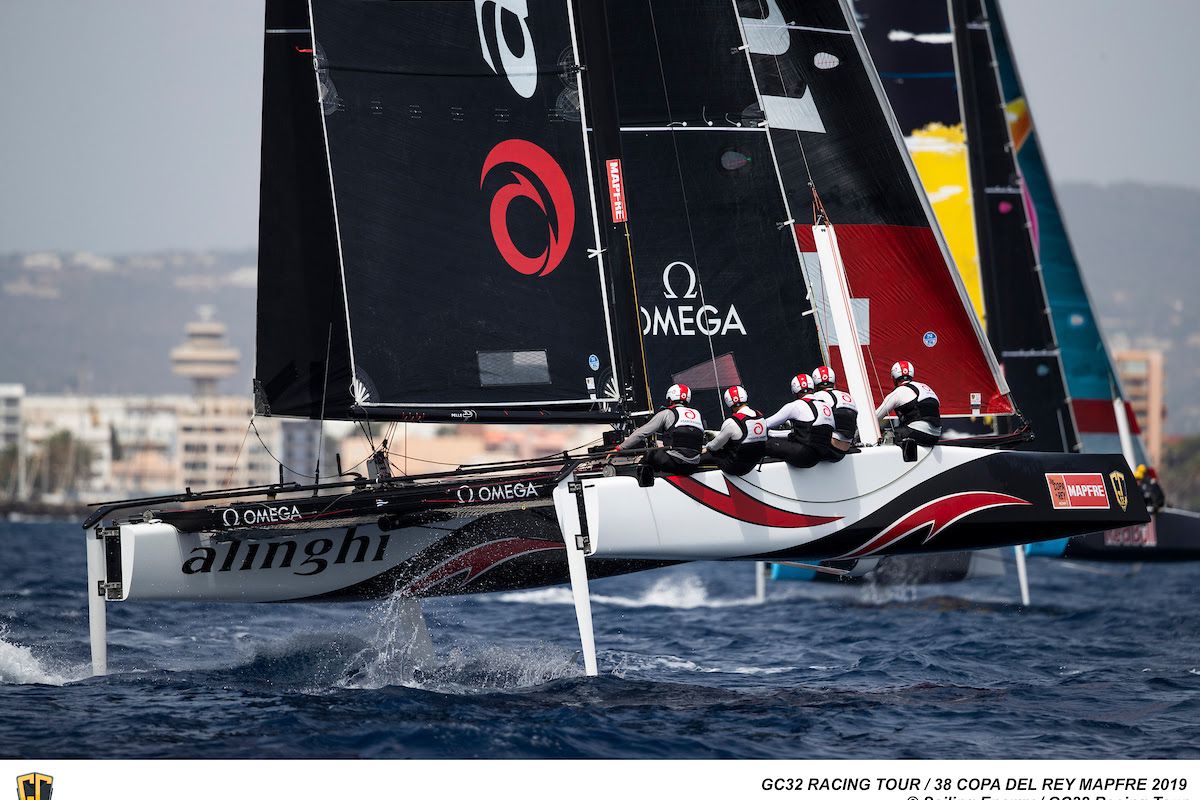 Oman Air dominated the early part of day 2 (Thursday), an altogether lighter contest after the barnstorming breezes of day 1 at the 38th Copa del Rey MAPFRE. Adam Minoprio and his crew nailed some excellent reaching starts in the stronger winds of the first three races to score a hat trick of bullets in Palma. When the course configuration changed to upwind starts in the lighter breeze of just 6 or 7 knots, Alinghi finally rediscovered some form to win the fourth race of the afternoon.

While the last race of the afternoon took place in the softest breeze, it also served up the most surprises. At the start, Roman Hagara adopted the bold strategy of starting on port, gennaker flying, as he sailed behind the rest of the fleet who were on starboard. The unorthodox move worked well for Red Bull Sailing Team, the Austrians taking an early lead. However, the small but valuable patches of extra wind were not arriving evenly across the course.

On the first downwind, Alinghi found a good seam of breeze to pop the Swiss boat up on to the foils while everyone else was still low-riding. Pete Greenhalgh on board Oman Air could barely bring himself to watch Alinghi cruising past them, as they sat there, powerless and unable to respond. “Alinghi put somewhere between 10 and 15 boat lengths on us, and we couldn't do the same as we had a bit of dirty air which stopped us getting on to the foils. It was pretty painful.”

Alinghi displaced Red Bull from the lead, while up the next windward leg Zoulou made a break to the right away from the leaders. When they converged again at the top mark for the final time, Erik Maris’s gamble was rewarded as Zoulou rounded first, two boat lengths in front of the Swiss. Arnaud Psarofaghis had a choice - attack for the lead, or defend second place. He decided to gun for the victory. “We were trying too hard to win the last race, we wanted to attack Zoulou but it was too much. Sometimes you need to wait a bit more, be a bit more patient.”

Oman Air saw their opportunity, as Greenhalgh explained: “Alinghi gybed surprisingly early for the finish line. The French who were leading had gybed early and the Swiss did the same. We carried on for longer and that enabled us to hold a good lane all the way to the finish.”

It was a significant moment for the Omani crew, licking their wounds after a bruising encounter at the recent GC32 World Championships. “It's nice to get one up on these guys after they won the Worlds with two races to spare. We were hot on their heels halfway through the event, but we weren't happy how we finished up so it's good to be taking the fight back to them here.”

Oman Air now holds a four-point lead over their Swiss rivals, although Psarofaghis is relishing the chance to fight back on the final two days. “We can do better than we did today, we know that, and we’ll come back strong for the end of the regatta.”

Erik Maris felt the final race victory was a good reward after a solid day on the water. “We were pushing the top three hard all day but we are just missing a little something. We’re fast, we have good speed, and it worked out for us in the last race. Tomorrow we want to improve our upwind starts, that’s something for us to work on, but mostly we’re happy with the progress we are making.”

After leading the final race in the early stages, it all turned to dust for Roman Hagara as he was passed by Black Star Sailing Team at the final turning mark, relegating Red Bull to last across the finish line. Some might have said the Austrians were unlucky, but not Hagara. “It’s not bad luck, I don’t believe in luck. We were missing some of the gusts and not always choosing the best lanes. We need to be reading the wind better, that was the main problem today.”

A worse problem overcame M&G Tressis Silicius halfway into the first race when the lashing broke on their shroud, one of the wires which supports the mast. For a moment the mast leaned over alarmingly before Iker Martinez’s crew rescued the situation from getting even worse. That was the end of their racing but the Spanish will be back competing on Friday, for day three of the 38th Copa del Rey MAPFRE.