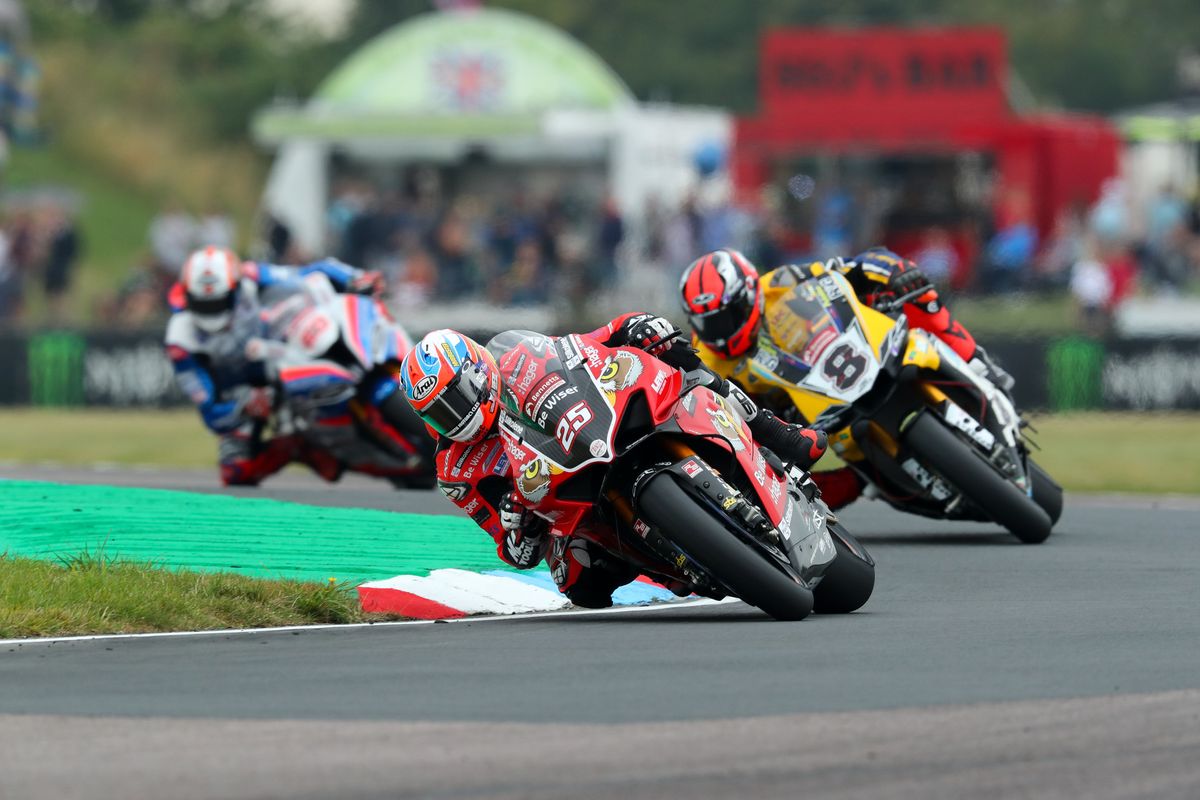 Two-wheeled thrills bring fans to their feet on dramatic day at Thruxton
Fans lap up the action in Hampshire as Superbike stars put on dazzling show
New winner Andrew Irwin and ‘Mr. Thruxton’ Josh Brookes spray podium champagne
Not long to wait for next high-octane fix, as BTCC returns in a fortnight’s time

The Bennetts British Superbike Championship in association with Pirelli delivered a double dose of drama-fuelled entertainment at Thruxton today (4 August), as the country’s finest two-wheeled warriors put on a sensational show for an appreciative crowd.

The UK’s premier motorcycling series always draws in the fans, and when Bennetts BSB visits the fastest track in Britain, excitement is guaranteed. Maintaining that trend, the first of the day’s two headlining contests was a non-stop thrill ride from lights-out to chequered flag, as the leading protagonists kept spectators guessing right the way to the very last corner.

Peter Hickman grabbed the early lead from the outside of the front row of the grid as pole-sitter and championship leader Scott Redding initially slipped to sixth, just behind fellow local hero Tommy Bridewell.

Andrew Irwin, Christian Iddon and Jason O’Halloran soon joined Hickman to make it a four-way fight at the front, but behind them, after biding his time in the opening laps, Redding was increasingly turning up the wick and by mid-distance had latched onto their tail. As the Be Wiser Ducati man moved forward, however – dragging team-mate Josh Brookes with him – his Oxford Racing rival Bridewell found himself being shuffled backwards.

In evidence of the superb slipstreaming spectacle – delighting the hordes of fans filling the grandstands and packing the circuit banks – the top nine were blanketed by less than 1.4 seconds with four laps to go, but all eyes were fixed firmly on the very front of the field.

The scrap for supremacy eventually settled down to the quartet of O’Halloran, Irwin, Brookes and Redding, before Irwin survived a wiggle under braking into the chicane to snatch the advantage on lap 18. With the Ducatis hunting as a pack, Redding then set about picking his competitors off one-by-one and looked primed to grab the lead on the final lap, but Irwin proved to be a step too far for the former MotoGP podium-finisher, as a last corner attempt around the outside failed to come off.

Irwin duly took the chequered flag to register his breakthrough Bennetts BSB victory, just two tenths-of-a-second ahead of Redding, with Brookes – the most successful of the current crop at Thruxton – completing the rostrum in third, the Australian coming on increasingly strong as the race progressed. Bridewell wound up a frustrated eighth on home soil.

“This is crazy – it’s so hard to put into words what I’m feeling,” reflected an emotional Irwin, after securing Honda’s first win at Thruxton in seven years. “I really didn’t expect it – I don’t think anybody expected it from me! My first thought after taking the chequered flag was, ‘I’m earning some money for the first time in my life!’ It was said before the weekend that you don’t have to be the fastest rider here to win, but that you do have to be the smartest – well we managed to be both in that race! I’m so happy!”

Race two was a three-part thriller. Brookes and Hickman focussed on making a break early on, pulling more than two-and-a-half seconds clear of the chasing pack before the action was red-flagged on lap nine due to intensifying rain – just as Hickman was looking set to mount an attack.

The Smiths Racing man duly sped into the lead at the re-start, but it didn’t take Brookes long to redress the balance, with earlier winner Irwin next in line while Redding – who had been climbing the order prior to the stoppage – fell to the foot of the top ten. The flying Irwin subsequently moved up to second and closed right onto Brookes’ tail for the lead, with Dan Linfoot posting fastest lap as he scythed through into third. The race was developing into a six-way scrap when it was halted again after Glenn Irwin’s crashed BMW caught fire on the exit of the chicane.

When it resumed, Brookes rapidly checked out as all the fun happened behind, with pretty much everybody else disputing second. ‘Mr. Thruxton’ ultimately took the chequered flag more than four seconds ahead of the enthralling battle for the runner-up spoils, which included multiple passes and even gesticulations at close to 200mph

Redding crossed the line second, but had 15 seconds added to his finishing time for not completing a long lap penalty issued for cutting the chicane. That dropped the Be Wiser Ducati rider well outside the points, meaning Irwin and Hickman rounded out the rostrum, the pair separated by the narrowest of margins of just 12 thousandths-of-a-second.

“Ordinarily, you need to ride pretty conservatively round here due to tyre wear, but when the race was reduced to 13 laps at the first re-start, I knew I could just go for it and when it was subsequently shortened again at the second re-start, there was no need to worry about the tyres anymore so I gave it everything I had,” explained Brookes. “From that point on, it was game on – and I had a lot of fun!”

In the support series, there were podium celebrations for Stalbridge’s Brad Jones with second place in Dickies British Supersport – repeating his Saturday success – while Puriton’s TJ Toms came within a whisker of taking his first Superstock 600 win of the season after charging from sixth on the grid into the race lead, only missing out by 0.174 seconds following a dazzling duel for glory.