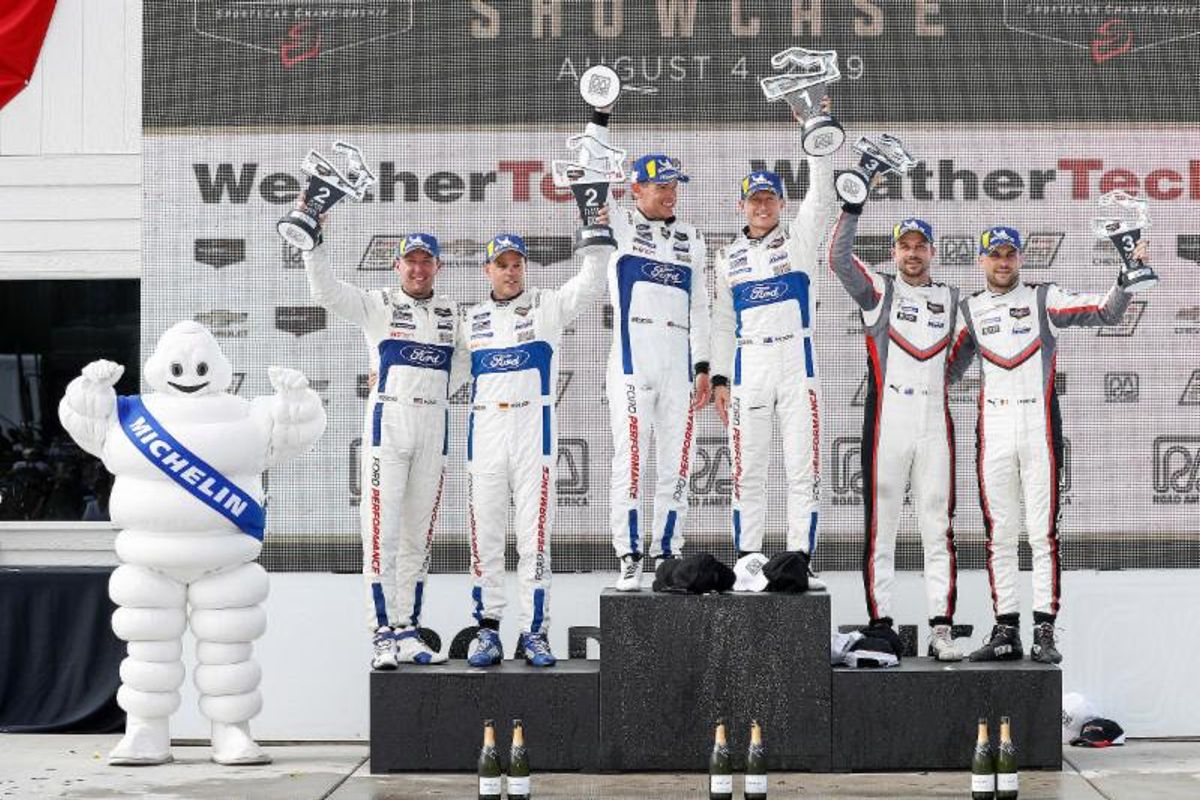 There’s something about Road America that agrees with Ford Chip Ganassi Racing.

Ryan Briscoe and Richard Westbrook drove the No. 67 Ford GT to victory to repeat their win from 2018. Dirk Mueller and Joey Hand, who won the GTLM event on the Wisconsin circuit in 2017, finished second Sunday in the No. 66 Ford GT.

“I think we’ve always run strong here and I think we were unlucky not to win the first year (2016), too,” said Briscoe, who earned his 19th career IMSA win. “It’s just a track that really suits the Ford GT. The long, fast corners and obviously now, it was more about the consistency than outright speed.

“We always come here with a lot of confidence and know that we’re going to have a good shot at winning,” Briscoe added. “To get a 1-2 was just fantastic.”

In a race void of full-course cautions and opting to go with just two pit stops, Briscoe and Westbrook led 34 of the 77 laps in GTLM, including the final 17 on the iconic 4.048-mile permanent road course.

“I think the yellow-free race played to our strength of long runs,” Briscoe added. “It was a pretty straightforward strategy of two stops. We were definitely better at the end of the stints than a lot of the other cars out there. We knew our advantage was going to be on old tires and that showed today. I think that’s where we made the difference.”

Starting second in GTLM, Briscoe took the lead on the opening stint, passing class pole sitter Oliver Gavin in the No. 4 Corvette Racing Chevrolet Corvette C7.R on Lap 19, about 40 minutes into the two-hour, 40-minute race. Briscoe turned over the car on a pit stop six laps later to Westbrook, who double-stinted the run to the checkered flag.

Westbrook took the lead for good when Antonio Garcia made the last of three pit stops for the No. 3 Corvette C7.R on Lap 60. It ended up being an extended stop to replace batteries in the Corvette, dropping the No. 3 to a fourth-place finish. From there, Westbrook was never threatened and crossed the finish line 10.657 seconds ahead of teammate Hand.

“The key was being good on the tires,” said Westbrook, who collected IMSA win No. 16. “Really, those last 10 laps on the stint were the important 10 laps, not the first 10 laps. If you fell of the cliff (in tire performance) like the Corvettes definitely did 20 laps into the stint, then you were toast.”

In addition to repeating at Road America, Briscoe and Westbrook claimed their second straight win this season, following a victory two weeks ago at Lime Rock Park. Westbrook noted the difference in race strategy from one win to the next.

“Polar opposite of Lime Rock, when we won on a three-stopper,” Westbrook said. “Today, we made the two-stopper work. Just feels awesome. Ryan did a killer job today, put me in a really strong position.

“The 3 car definitely came into play at one point; we were a bit nervous about them. There was lots of chat on the radio about the 3 car. I’m going, ‘OK, here we go,’ but unfortunately they had a bad stop at the end, and in the end it was quite comfortable.”

Hand passed Tommy Milner in the No. 4 Corvette to move the No. 66 into second place with seven minutes left in the race. Milner stopped for a splash of fuel shortly after, allowing the No. 912 Porsche GT Team Porsche 911 RSR with drivers Earl Bamber and Laurens Vanthoor to claim the final spot on the GTLM podium.

With three races remaining in the WeatherTech Championship season, Bamber and Vanthoor lead the GTLM standings with 248 points. Teammates Patrick Pilet and Nick Tandy, who finished seventh Sunday in the No. 911 Porsche, are second with 234 points. Briscoe and Westbrook are third with 230 points, one ahead of No. 3 Corvette drivers Garcia and Jan Magnussen.


Pfaff Goes Back-to-Back: Campbell, Robichon Secure Second Win for WeatherTech Championship GTD Porsche
From the shortest track to the longest, Pfaff Motorsports has proven it can get the job done.

The Canadian team – new to the IMSA WeatherTech SportsCar Championship this year – came to Road America this weekend on the heels of its inaugural win in the GT Daytona (GTD) class one race ago.

That first win came at the 1.478-mile Lime Rock Park circuit, the smallest on the WeatherTech Championship calendar. To repeat at Road America, the longest track on the schedule at 4.048 miles, would take an entirely different approach.

The team nailed it.

Zacharie Robichon – who scored his first IMSA victory at Lime Rock with one-off co-driver Dennis Olsen – paired with fellow Porsche driver Matt Campbell this weekend in the No. 9 Porsche 911 GT3 R. Robichon qualified the car in fourth, but jumped early into second place in Sunday’s race, where he held steady for the entirety of his stint.

Campbell slid into the car midway through the race and began to hunt down the leading No. 48 Paul Miller Racing Lamborghini Huracán GT3 of Bryan Sellers. Under constant pressure, Sellers succumbed to Campbell with 50 minutes left in the two-hour, 40-minute contest.

The No. 9 Porsche went on to win by an entire lap, as the overall-leading Daytona Prototype international (DPi) separated the Porsche from the Lamborghini, which put Sellers a lap down as he crossed the finish line.

“The middle stint was the most important part of the race,” said Campbell. “We knew we had really good speed. Zach did an awesome job bringing me the car in in P2. We had great pace at the start of the stint and we were able to catch the Lamborghini car. But then we knew it was going to be really fast, so we started to conserve fuel as much as possible and that’s what won our race today.”

“I think it’s a totally different atmosphere from behind the wheel,” Robichon said. “Last race was a little more chaotic with the short track, (where) everything happens a lot more quickly. Here at Road America – a beautiful track; I think every driver says it’s one of their favorites and there is a reason for that – it’s very fun to drive and also very challenging. It’s a completely different challenge from a driver’s point of view, but at the end of the day the execution is the important thing.”

As the only full-time driver in the No. 9 entry, Robichon holds a solo position in the GTD championship standings with 176 points, jumping from seventh to third following Sunday’s win. Robichon also assumed a five-point lead in the championship standings for the WeatherTech Sprint Cup, which consists of all races two hours, 40 minutes in duration or less solely for the GTD class.

“That’s one thing you keep in the back of your mind, but you also can’t focus too much about,” Robichon said of the championship standings. “You’ve got to keep working on that one lap at a time, as they say. Hopefully, we can keep the momentum for the last few races.”

The runner-up finish for Paul Miller Racing is the team’s best of the season thus far. Sellers co-drove this weekend with Corey Lewis, subbing the rest of the season for Ryan Hardwick, who suffered an injury last month at Canadian Tire Motorsport Park.

Five manufacturers made up the top-five finishing order on Sunday, with the No. 14 AIM Vasser Sullivan Lexus RC F GT3 of Richard Heistand and Jack Hawksworth and GTD championship leaders Mario Farnbacher and Trent Hindman in the No. 86 Acura NSX GT3 for Meyer Shank Racing finishing fourth and fifth, respectively.

It’s a two-week break for the IMSA WeatherTech SportsCar Championship GTD class, which returns to VIRginia International Speedway on August 23-25 for the Michelin GT Challenge. VIR marks the second and final GT-only event on the WeatherTech Championship calendar.

The Michelin GT Challenge is scheduled for Sunday, August 25 at 1:30 p.m. ET with live coverage on NBCSN and live streaming available on the NBC Sports App and NBCSports.com.