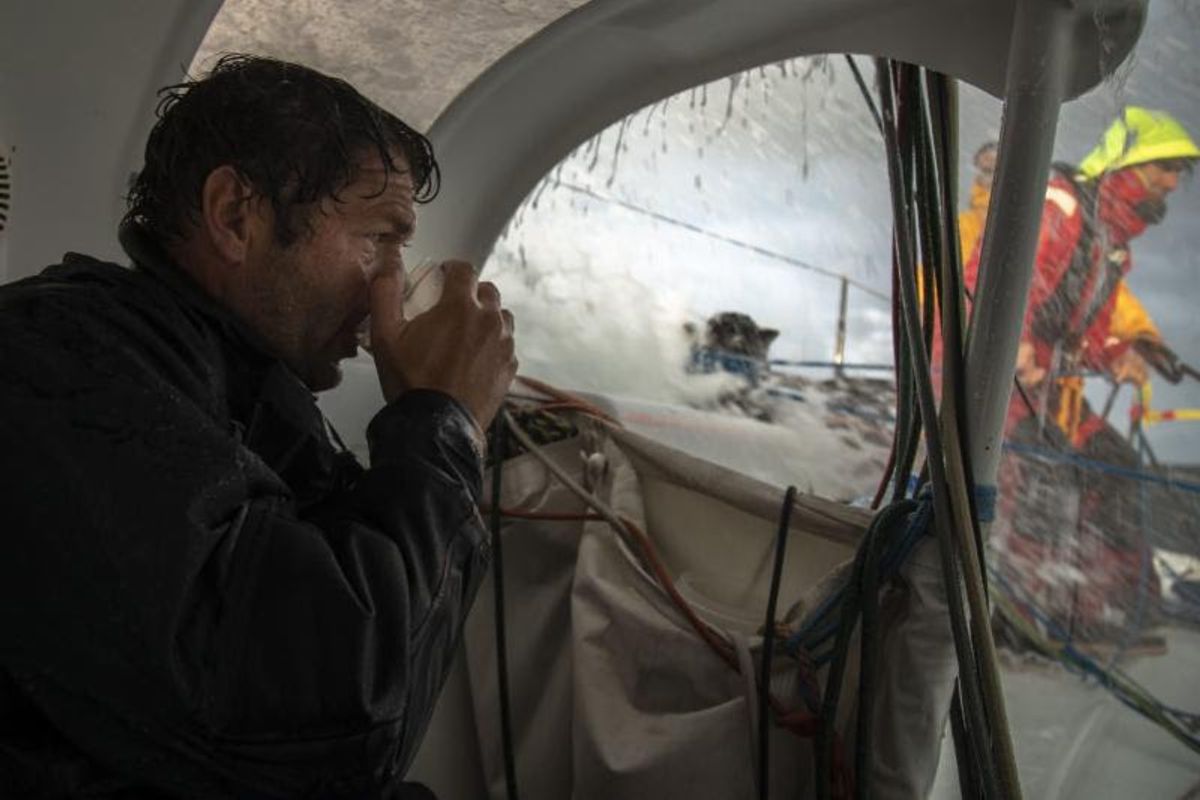 Like a tap slowly being turned on, the quantity of Rolex Fastnet Race boats arriving in Plymouth has been steadily increasing since yesterday afternoon, with crews clambering off boats into the welcoming arms of the race office before heading off for a beer in the race village.

Overnight some of the hottest boats in IRC Zero reached Plymouth and it is these which are looking like they may be main contenders in their own class, and also for the main prize overall this year.

Currently holding second overall in IRC Overall, after finishing at 21:49 last night, was Nicolas Groleau's Bretagne Telecom. This is the canting keel Mach 45's sixth consecutive Rolex Fastnet Race and although she has previously won the now defunct IRC Canting Keel class, this is the nearest she has come to overall honours.

La Trinite-sur-Mer based Groleau, whose company JPS Productions builds the successful Mach 3 Class40, was racing with a hot crew that included both the Mach 45 and Mach 3's designer Sam Manuard (himself an accomplished sailor) and two time Solitaire du Figaro winner Nicolas Troussel (who is waiting for his brand new IMOCA 60 CORUM L'Épargne to launch).

Bretagne Telecom benefitted this year from the near absence of upwind conditions. "There was more reaching and more wind in the Celtic Sea, but it was the same as before for the finish from Scilly to Plymouth - downwind at full speed!" said Groleau comparing this race with previous ones. The most wind they saw was 25-28 knots crossing the Celtic Sea in very choppy seas.

Their main competition were the unprecedented fleet of five Cookson 50s. "My boat is a rocketship downwind and reaching, but close reaching/upwind they are faster. So downwind it was easy for us," concluded Groleau.

First of the Cookson 50 canting keel boats to reach Plymouth last night was American Ron O'Hanley's Privateer, racing for the first time without her owner on board (O'Hanley recently sustained a knee injury and is recovering from surgery). Privateer was hoping this year to do one better than 2017 when they finished second overall under IRC.

"This Fastnet was very different - getting out of the Solent downwind, going straight rather than tacking, made for a fast exit and changed everything," recounted helmsman Tim Dawson.

Privateer had led the group of Cookson 50s (plus Bretagne Telecom and American Clarke Murphy's 82ft Aegir) past the Scilly Isles and out into the Celtic Sea. Prior to the Fastnet rock, like others, they too expected the significant right hand shift as a squall came through bringing with it 27 knots.

They rounded the Fastnet Rock shortly before 0400 yesterday and as Dawson said "from there you couldn't have asked for better conditions. It was beautiful sailing, surfing down the waves in a consistent 18-23 knots."

Unfortunately on the leg to the Scilly Isles they were unable to prevent Bretagne Telecom screaming past before the two boats split at the TSS to the west of the Scilly Isles. Ultimately Privateer trailed the French boat across the finish line by 14 minutes on the water.

The Ker 46 Tonnerre de Glen crossed the finished line at 03:20:40, first home in IRC One but another currently looking strong within the top 10 overall under IRC.

This morning owner Dominique Tian and his crew were focused on getting warm again (Tian's from Marseille and not well acquainted with British summers) before resuming his watch on the YB tracker to follow how the race unfolds under IRC corrected time. The boat looking most likely to steal Tonnerre de Glen's thunder is L'Ange de Milon, Jacques Pelletier's Milon 41 which was about 70 miles behind as Tonnerre finished, and is expected to cross the line herself at around midday.

Meanwhile, Tian - a Fastnet virgin - can look back on a race well executed: "This is part of a concentrated three-year programme where we have done many of the big offshore races: Rolex Middle Sea, Palermo-Montecarlo, and a build-up in the Solent this summer, with the Round the Island Race, the Channel Race, IRC Nationals, Cowes-Dinard and a few others."

Tian will look back on the fast exit from the Solent as one of the special moments of this race, but has less fond memories of the second night as they battled towards the Fastnet lighthouse: "It was wet, very wet, with waves that threatened to break your back, your boat, possibly both. The Celtic Sea is unforgiving, and we're not used to the cold."

Once around the Rock, life became more straightforward, except for avoiding the dreaded TSS exclusion zone. "We knew we didn't want to go there," said crewman Stefano Cipriani. "We were tight reaching with the spinnaker with maybe just 100m of safety gap to leeward. We couldn't afford to bear away if a gust hit, so that was tense for a while."

Second across the line in IRC One, 25 minutes behind, was Ino XXX, James Neville's HH42. "The boat was wet outside and in," said Neville, a veteran of five Fastnets, with a smile. "That was a really tough race, one of the toughest I've done. The Celtic Sea was very rough up to the Rock. We hardly got a break, nowhere along the course did anything come easy. We didn't quite manage to hang on to Tonnerre, so they've got us on handicap and it looks like the boats still out there are going to be coming down on good breeze from the Scillies. But we're here, we're tired, and I want a beer!"

Behind the outcome of IRC Two remains slightly mysterious with the tracker on the JPK 11.80 Courrier Recommandé becoming uncommunicative while crossing the Celtic Sea. Nonetheless (and incredibly) at the time of her disappearance the 2015 Rolex Fastnet Race's overall winner Géry Trentesaux was alongside defending Rolex Fastnet Race champion Didier Gaudoux JND39's Lann Ael 2, currently lying second overall in the larger/faster IRC One. Lann Ael 2 was expected to finish at around 1100 this morning with Trentesaux set to put in another outstanding performance at around the same time.

Runaway leader in IRC Three is inevitably 2013 overall winner and Figaro sailor Alexis Loison, racing with boat builder Jean Pierre Kelbert on the latter's JPK 10.30 Léon. While Arnaud Delamare and Eric Mordret's JPK 10.80 Dream Pearls led around the Fastnet Rock at 16:19 yesterday afternoon, they were rolled by Léon coming back across the Celtic Sea and by Bishop Rock at around 0700 this morning, the shiny new JPK was 20 miles ahead. Mid-morning, doublehanded Olympic hopefuls Hannah Diamond and Henry Bomby on their Sun Fast 3300 Fastrak XII were in the process of passing Dream Pearls to take second on the water.

While Noel Racine's JPK 10.10 Foggy Dew holds a strong lead in IRC Four, the perennial winner in this class was this morning facing a strong threat from sistership, Emmanuel and Etienne Pinteaux's Gioia. While ahead, Foggy Dew was lining up to round the east side of the TSS to the west of the Scilly Isles, while Gioia was going west of them. Which would prevail?

There is some concern for the smaller/slower boats in IRC Four at present as while the winds in the Celtic Sea have remained resolutely southwesterly or westerly since start day, they are set to be temporarily replaced by a ridge of no wind on Thursday morning before the southeasterlies ahead of a surprisingly intense depression for this time of year is forecast to bring 30 knot headwinds for the tailenders in the fleet.