Winners decided in the Rolex Fastnet Race IRC 1 and 2 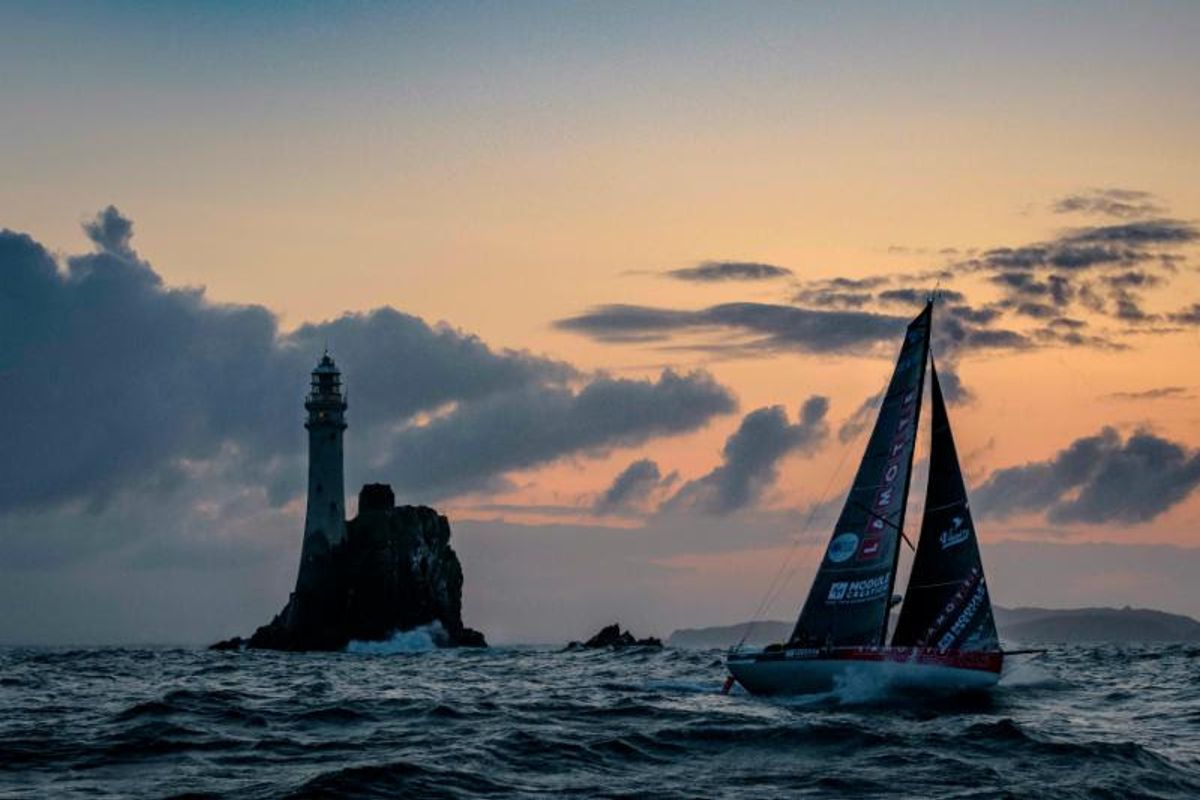 while Franco-Brit tops the Class40

One of the tightest competitions in the 48th Rolex Fastnet Race was between the eighteen Class40 pocket offshore rockets. Like the IMOCA 60s, the world's most successful fleet of 40ft race boats (with hulls 158 and 159 soon to launch) was competing under class rules, boat-on-boat, independent of the IRC fleet, only with 'full' crew, typically of four.

Leading out of the Solent and on out into the Channel was Lamotte - Module Création skippered by Luke Berry. To make the best of a transition in the breeze from the southeast to southwest, the leaders all headed southwest, finally encountering the shut down and shift just short of the Lizard. Berry described their frustration: "At one point we were going up and down for about an hour and hadn't moved! Luckily we didn't have to anchor."

Eärendil of Class40 veteran Catherine Pourre made it through the transition the best and mid-afternoon on Sunday led the Class40s out into the Celtic Sea ahead of other race favourites, Beijaflore, with Leyton and Lamotte - Module Création jockeying for third.

For the outbound blast tight reaching in 25 knots across the Fastnet Rock, Berry and his crew hoisted a gennaker, enabling them to blast past Eärendil whereas Beijaflore was able to sail straight towards the mark. Beijaflore led around the Fastnet Rock at 05:17 on Monday morning followed by Lamotte - Module Création at 05:51 and Leyton at 06:30, just four minutes ahead of Eärendil.

Shortly after rounding the rock, the gennaker furling system broke on Lamotte - Module Création, causing the sail to fill and Berry to worry about losing his rig as he had in the Défi Atlantique. This episode left Lamotte - Module Création 10 miles behind Beijaflore. But remarkably, Berry managed to regain all this lost ground by the time they reached Bishop Rock. From here the two boats remained neck and neck past the Lizard, with Berry nosing in front and then covering his rival.

Ultimately Lamotte - Module Création came home first, finishing at 23:43:22, with Beijaflore less than three minutes astern. "It was a good race for us especially when it finishes like that," said Luke Berry of his first major Class40 victory, sailing with a crack crew of Mini Transat winners Corentian Bouguet and Fred Denis and inshore racing specialist Arnaud Berland. "So a good, fast, very, very wet race."

On Beijaflore, whose crew included French offshore legend Marc Guillemot, this was only Mathelin-Moreaux's second Fastnet having previously competed in the IRC Four fleet. He only acquired his present boat in March and this was only her fourth race. "It was good for the boat, because we had a lot of reaching and strong wind and very good competition with the other boats," he said.

Jacques Pelletier, owner of the Milon 41 L'Ange de Milon, has been trying for the Rolex Fastnet Race class victory for a long time: "This is the first time I have had the chance to win this race. The first time I sailed in the Fastnet was in 1973 with a small boat. We completed the course in six days and six hours, something like that. This year we raced here in less than three days - it's absolutely marvellous."
Pelletier has lost count of how many times he has done this race over the years. "More than 10, less than 15."

He enjoyed the 2019 edition from the very beginning: "The start was very nice. We had very little difficulty getting out of the Solent. That night there were some important changes and some opportunities to be in a good place at a good time. So we succeeded in going ahead. After that, we turned past Land's End. It was direct to the Fastnet. It was a little hard, with the wind blowing 25 to 30 knots. From the Fastnet it was easier. With a wind angle of 80 or 90°, the boat was so fast, with the deck completely wet. It was a pleasure to sail in those conditions."

Pelletier is pleased with his three-year-old 41-footer: "It's a prototype, an evolution of the JPK 10.10, by the same designer. But we have to work a little more. As always, there are more things we can improve." The skipper is proud of the work ethic displayed by his team. "Our crew sails together in La Trinité-sur-Mer. We practise every two weeks, and then more in the spring. We are always the same crew which makes life easier because everyone knows what to do."
Overall Rolex Fastnet Race winner two years ago Didier Gaudoux, skipper of Lann Ael 2, paid tribute to Pelletier, knowing that this year his JND 39 will have to settle for second place in IRC One.

"From the Fastnet Rock to the Scillies, we pushed the boat like hell, it was really wet, wet, wet. Nothing was dry. For the first time in my life I wondered if we were pushing the boat too hard. I was hoping everything would hold together. Fortunately it did." After completing five editions of the race, Gaudoux's passion for this 600-miler remains undimmed.

"Like many French, we enjoy sailing in the UK, to sail under the RORC organisation which is always fantastic, and who run the best race in the world. That's why we come. Since 1925, it has always been the same route, always to the Fastnet Rock. It's iconic. If you want to win one race in your life, it is this. Every sailor would like to win the Fastnet."

Trentesaux works his Fastnet magic one last time (probably!)
The JPK 11.80 Courrier Recommandé arrived at 11:23:50 this morning, another barnstorming performance by the Rolex Fastnet Race's Géry Trentesaux. Time and again the Frenchman has proven that he understands this race perhaps better than any other as he rounds off his high-level racing career with almost certain victory in IRC Two.

He won't be emulating his overall victory from the 2015 Rolex Fastnet Race, but Trentesaux has no regrets: "The aim was to win the class, but to win overall is the cherry on the cake. We like this race, it's probably the best race in Europe. This was my 15th Fastnet and I sailed my first one when I was 18. But this was my last race probably, my last Fastnet with the crew because we are an old crew now. We began with this crew for the Fastnet 1999. We are too old to be competitive any more. We are not fast enough sometimes, although we have some young crew with us. It's a hard sport, not a sport for old men."
Courrier

Trentesaux was satisfied with his strategy and his crew's decision-making and boat-handling in some very challenging conditions: "We didn't make a mistake, we had a good start, we were in the right place for the wind. Probably we made some small mistakes, but only half-mile mistakes, not the race. We are not so fast reaching up to the Fastnet because we had no Code 0. Lann Ael 2 and L'Ange De Milon are faster than us on that point of sail."

Although, it should be said that those two boats are competing in IRC One, so they weren't direct competitors. However, it has always been the Trentesaux trademark to be keeping up with the class above, holding on to the boats which theoretically should be faster. Asked what is his winning formula, Trentesaux grins: "We like sailing, we like winning and after that we like to drink."
So, with that in mind, is this really his last assault on the Fastnet Rock? "If I sail the Fastnet again, maybe it will be a cruising Fastnet, a race with my grandchildren."