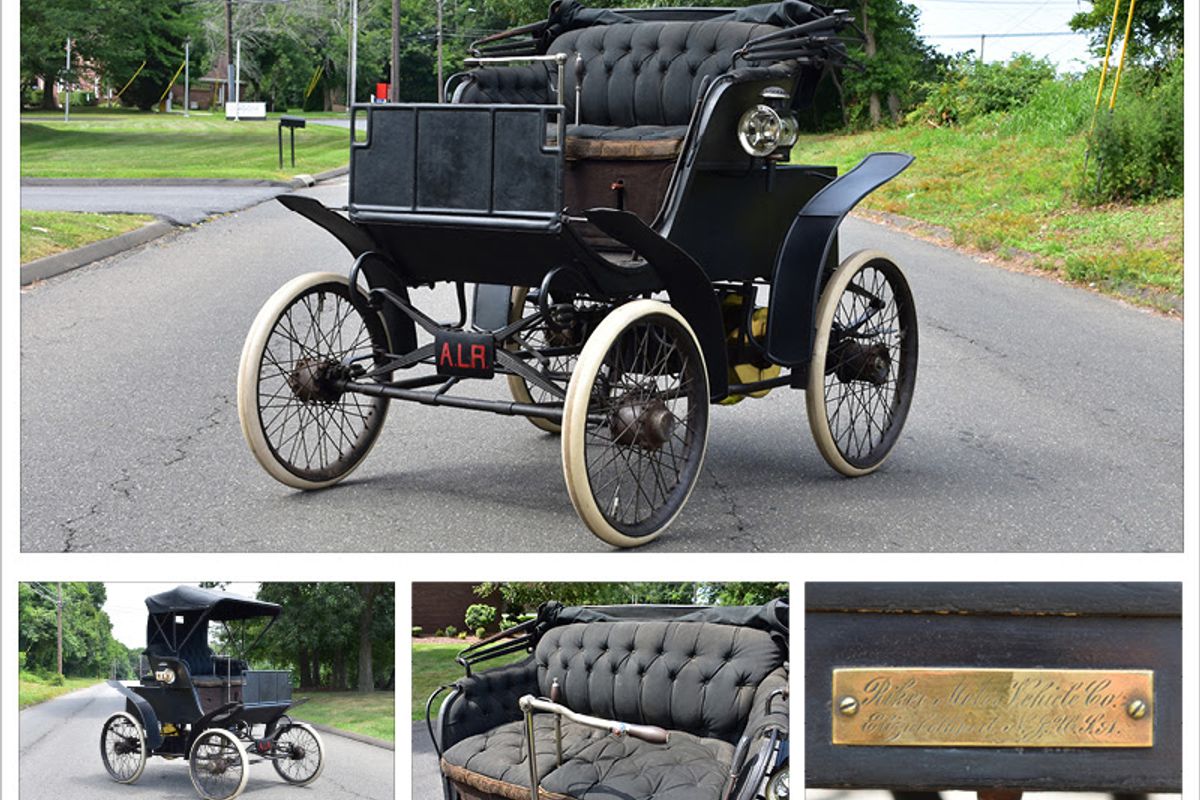 • Amazing original, unrestored condition
• Built and raced by creator Andrew Riker, green energy pioneer
• Driven to victory at the Mechanics Fair at Charles River Park Race in 1898 and at the 1900 Paris Exhibition
• Winner of the very first 50-mile road race held in America; reported to reach an incredible 40 mph
• Eligible for the London to Brighton Veteran Car Run
• Limited roster of owners in 121 years including the Riker Family and The Henry Ford Museum

An early pioneer of the American automobile industry, Andrew Riker dropped out of college after his freshman year in 1884, and began experimenting with electrical propulsion, attaching an electric motor and battery – both of his own design – to a Coventry bicycle, eventually completing it in his parents’ basement three years later. In 1888, he established the Riker Electric Motor Company of Brooklyn and followed up with the Riker Motor Vehicle Company the following year.

Over the next several years, Riker became one of the country’s earliest manufacturers of electric vehicles, including trucks, vans, and trolleys, which could regularly be seen in New York City; a Riker truck built in 1898 was reportedly the city’s first electric delivery vehicle. His output of passenger cars was small and infrequent, limited to a handful of prototypes, and often built with competition in mind. As Beverly Rae Kimes wryly noted, “His penchant for derring-do left him scant time to carefully consider the vagaries of manufacture.”

In 1898, Mr. Riker built the electric car offered here, and was photographed with it at his home in Connecticut. The body style was identified using carriage terminology as a Stanhope, with the driver and a passenger riding facing forward, in conventional fashion, and a single rear-facing seat aft. The 1.5KW motor directed its power to the rear axle through a controller with three forward speeds and two reverse, while the driver steered by tiller bar. Performance was measured by a single volt-ampere gauge in the center of the floorboard, labeled “Riker System” with a patent date of March 22, 1898.

As documented by the November 8, 1898 edition of The Horseless Age, Riker entered his creation into the Motor Carriage Exhibition at the Mechanics Fair at Charles River Park in Boston, where he won First Place in a competitive race. Later, in 1900, he took the car across the Atlantic, to the Exposition Universalle Internationale in Paris, where it was awarded a gold medal. Amazingly, photographs survive of the car at both of these events.

Upon its return stateside, the Riker Electric was entered by its builder in the very first race held by the New York Automobile Racing Association, held at Aquidneck Park in Newport, Rhode Island, on September 6, 1900. Before a large crowd, the Riker succeeded mightily, winning the event by covering the distance in 13 minutes, 5 seconds; it finished third in the Championship Race, won by none other than William K. Vanderbilt, Jr. That same year, the car won a race held on Long Island, a 50-mile jaunt from Springfield to Babylon, New York, and back again, on April 14th. This was reportedly the first 50-mile road race held in the United States.

In 1902, Riker sold his electric automobile company to famed bicycle magnate Colonel Albert Pope and moved his considerable engineering talents to Locomobile, where he was responsible for much of the company’s legendary design work, as well as their racing program; among his perks was the ability to enjoy driving the famous ‘Old 16’ following its Vanderbilt Cup win. His illustrious career also included serving as a co-founder of the Society of Automotive Engineers (SAE) and as the organization’s first president, a role that he held for three years, with none other than Henry Ford as his vice president. Undoubtedly both men knew and respected each other a great deal.

After its exhibition use, the Stanhope was given to Mrs. Edith Riker to use as her personal conveyance, and upon Andrew Riker’s passing in 1930, the Stanhope and several other Rikers were gifted to Ford’s new museum in Dearborn, Michigan. Indeed, the museum’s Object Report noted that it had been “used by Mrs. Andrew L. Riker as her personal car” prior to being gifted. Interestingly the museum seems to have tested, or at the very least noted, the Riker’s performance, recording its speed as “12 MPH, 25 MPH on asphalt or macadam.” The current owner notes that it is actually much faster, reportedly capable of 40 mph.

The car remained preserved in the museum until 1985, when it was part of a now-legendary auction of vehicles and other items from their collection. Among those who were aware of the live auction was Andrew Riker Jr.’s widow, Eleanor. After successfully acquiring this historic family heirloom, the current owners were entrusted to maintain the car for Mrs. Riker. They acquired it from her before she passed, along with a leather license plate bearing the initials A.L.R., which she reportedly indicated was the original plate it bore. Before a numbering system was developed, New York registration plates used the owner’s initials, which would make it one of the earliest cars registered in the state and, thus, the country. This car has now remained in the personal collection of the current owners for over three decades.

Not merely a significant early electric automobile, the Riker has been very carefully preserved and is in extraordinary original condition. It retains not only its original paint and upholstery, but even Riker’s monogrammed initials on the sides of the seat, and the Henry Ford Museum’s discreetly hand-painted accession number 30.328.5. The car retains its original, very historic leather license plate from 1898, as given with the car by Mrs. Eleanor Riker. Recently returned to running order for the first time since it was received by The Henry Ford Museum in 1929, it remains in the same condition that it was then – remarkably unchanged from the photographs taken at the time of its donation to the Ford museum.

Few veteran automobiles anywhere in the world, regardless of their propulsion, have survived in such an untouched, and exquisitely preserved state. Accompanying the car is a historic file including several photographs, period articles, and documentation from the Benson Ford Research Center at The Henry Ford Museum. With the green energy movement taking hold worldwide, it is important to study and look back at the origins of alternative energy transportation. Perhaps the most notable origin is right here – this Riker Electric, a pristine, extremely significant survivor from the dawn of electric motoring, never before for sale outside of the Riker Family and The Henry Ford Museum. This automobile is historic in its origin, successful in its races and spectacular in its preservation. Capable of use in the most prestigious of automobile events, including the London to Brighton Veteran Run, it represents the pioneering of a now century old journey of alternative energy and an irreplaceable piece of history - the most important electric car ever built.

Video: Test driving the 1898 Riker Electric, the most historically significant car in Monterey this year