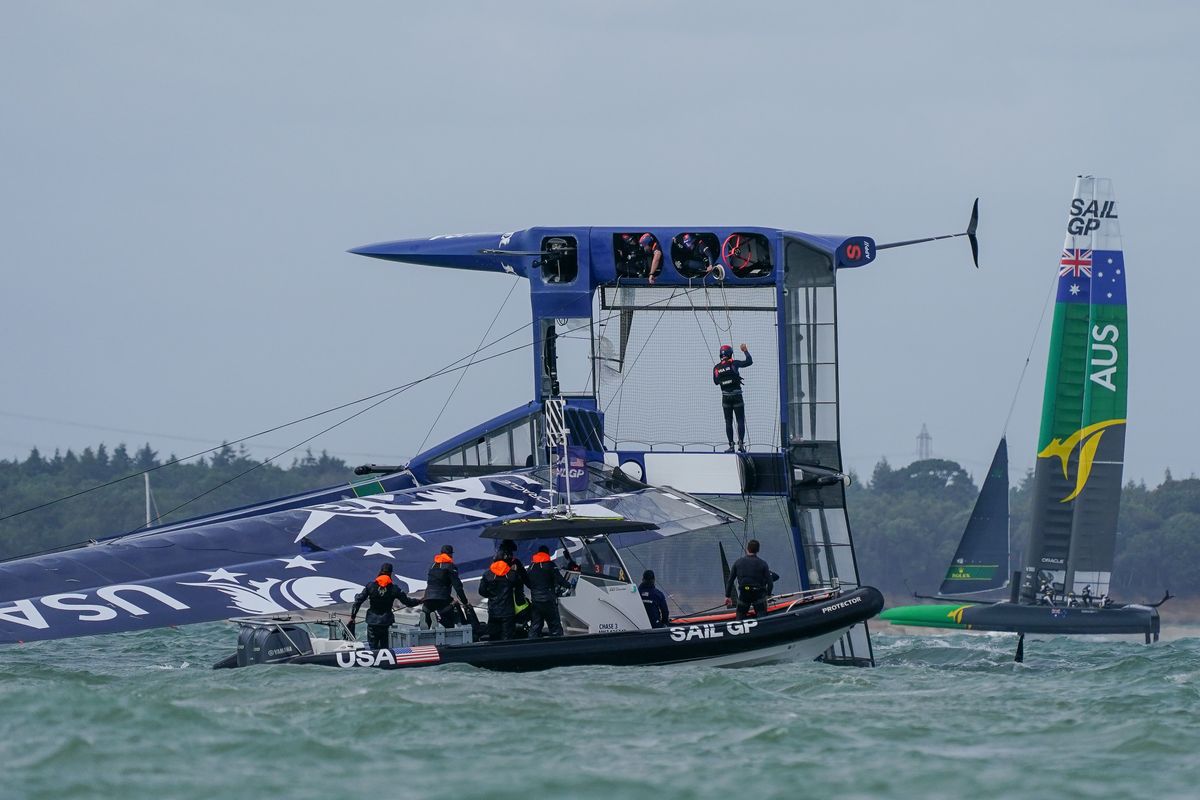 A ten-minute delay, waiting for the sea state to improve, added to the intense atmosphere of Cowes SailGP.

The first race of 'Super Sunday' saw Phil Robertson's China SailGP Team leading off the starting line, but with the pack in hot pursuit. Sailing in the windiest conditions the high speed F50s have seen yet in SailGP Season 1. Within seconds of the start, the America team got hit by a gust and couldn't keep the boat upright, ejecting wing trimmer Tom Johnson from the cockpit but all sailors were safe and accounted for, although out for the remainder of the race.

Thee second leg saw Tom Slingsby's Australia SailGP Team run away with the race, a pleasant surprise for Slingsby, who has been vocal about lack of time on the water this week. It was a close match between Dylan Fletcher's British team, Japan and China, as they chased the Australians down the course. Audiences saw wildly close racing between the three teams, who foiled at speeds nearing 30-knots just meters apart. No surprise after the first leg, Slingsby extended his lead to take the win, hitting 50-knots as the Australia boat crossed the finish line.The hometown team suffered an unfortunate crash on the penultimate leg that allowed the Japan and China teams to pass them, taking second and third, with France fourth. After suffering damage, the British team limped home in fifth, a huge disappointment for Fletcher.

Bad news for the British team who were unable to compete in race 2 due to damage sustained in the first race. Dylan Fletcher, who set the pace gearing up to Cowes SailGP was unable to continue his charge. However, the U.S. team was back in action for race two despite a capsize in the first race. There was no limit to the action on the course, Tom Slingsby's Australia team led off the start line and held the position to the end, giving his competitors a masterclass in heavy air sailing.

Just two minutes in, France fouled the U.S. team and received a penalty for not giving proper right of way. The penalty forced France to the back of the fleet behind China. It was also a challenging race for Japan after breaking one of their grinding pedestals, meaning they were unable to trim their wing properly on one tack. The ambitious group was able to hold their own for most of the race, but ultimately gave second to China who sailed their best race yet with new wing trimmer Paul Campbell-James onboard. Japan took third with the U.S. team fourth and France fifth.