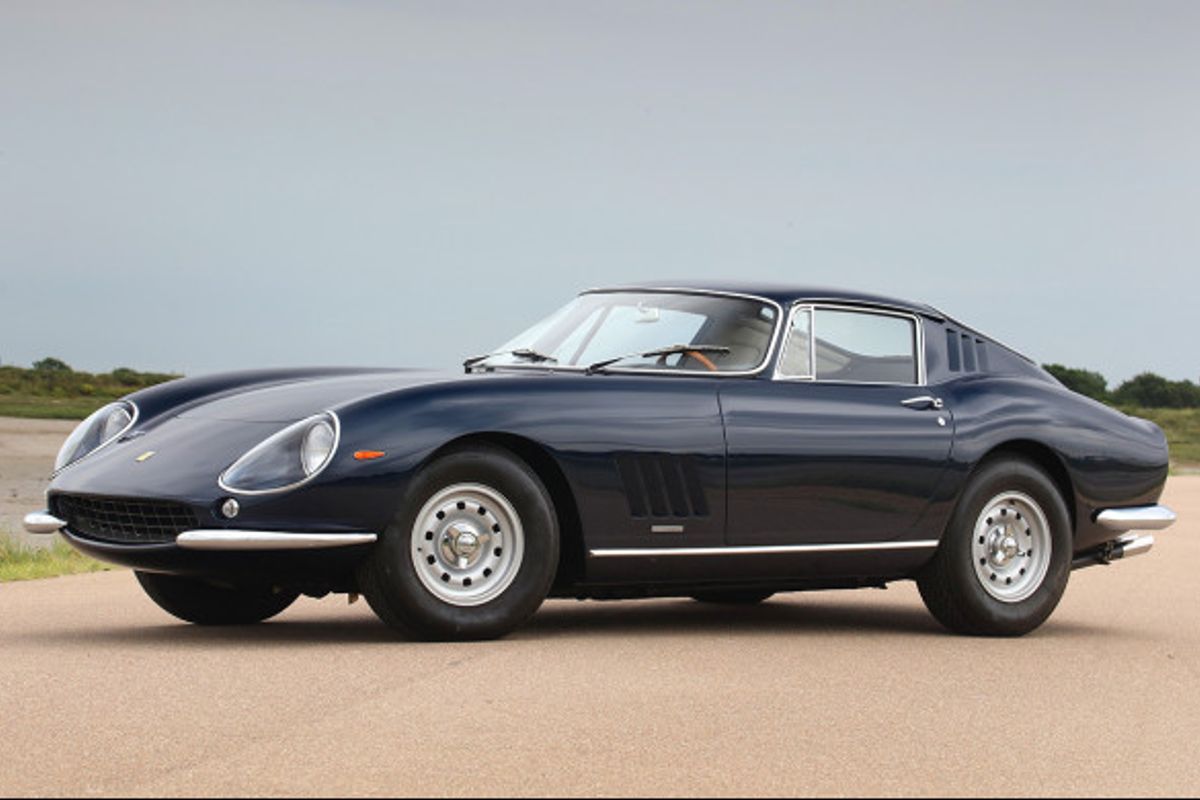 THIS CAR
Introduced at the 1965 Paris salon, the long-nose version of 275 GTB continued Ferrari’s tradition of offering competition options intended for racing customers, including six Weber carburetors rather than three, and lightweight aluminum alloy coachwork. Of the 205 long-nose GTB examples built, only 77 cars were bodied in alloy. The 275 GTB Long Nose Alloy now holds a special significance with marque collectors as the most exotic and powerful iteration of the two-cam berlinetta.

Benefiting from an exhaustive restoration to award-winning standards, as well as a unique factory specification, this 275 GTB, chassis 08011, is a particularly noteworthy example. Not only was this car fitted with lightweight alloy coachwork, it was factory equipped with the rare and desirable six Weber carburetor intake arrangement, as well as high-lift 10 mm camshafts for improved performance. The research on file of model expert and Ferrari collector Dyke Ridgley suggests that just 33 long-nose GTB examples were equipped with the ultimate combination of alloy coachwork and six carburetors. Specified with instruments in kilometers, the powerful 275 was finished in Blu Notte (Night Blue) paint over an interior of Rosso (Red) Vaumol leather with gray carpeting; according to the research of marque historian Marcel Massini, 08011 is the only 275 GTB finished from new in this striking color scheme.

The 275 was distributed to a Ferrari dealership in Örebro, Sweden, and sold in early May to Sture Nottorp, a well-known rally driver from Göteberg who also campaigned a Ferrari 410 Sport and a 250 GT Tour de France Berlinetta (which also is offered at Gooding & Company’s 2019 Pebble Beach Auctions as Lot 17). Later that year, Nottorp displayed the 275 at a sports car show at the local fairgrounds, and because he suffered from night blindness, he modified the nose by adding four additional headlights into the grill opening, and two square fog lamps in place of the front bumperettes.

In May 1969, the Ferrari was acquired by Fehn AB of Göteberg and repainted in blue metallic before being sold in November to a Swedish dealer, Sven Andersson. In 1970, the GTB was acquired by Per Ingvar Brandström International Consulting in Stockholm, and three years later the berlinetta suffered a minor interior fire, prompting the owner to send the car to Carrozzeria Scaglietti for repairs. The opportunity was taken to restore the nose to the original factory configuration, and the exterior was repainted metallic green.

Little is known about the Ferrari’s next period, though it continued to reside in Sweden, where it was re-registered in 1993. A year later, the car was confiscated by the Swedish government over a tax lien, and it was subsequently sold to Gert Ove Johansson, a motorbike dealer residing in Olofström I Blekinge. By the end of 1994, the GTB was acquired by Bert Welander and exported to the US, ending almost three decades of uninterrupted Swedish-based ownership.

In 1997, the Ferrari was featured in the Swedish magazine Autohistorica, and around this time the car was sold by marque expert Lyle Tanner to a private collector in Japan who registered it with tags reading, “275.” After 10 years in Japan, 08011 was purchased in November 2007 by Charles Arnott of Maryland, though he only held on to the car briefly. By 2009, the Ferrari was acquired by Paul “Barney” Hallingby of Sharon, Connecticut, and in September 2011 the car was authenticated with a Ferrari Classiche Red Book attesting to the presence of its matching-numbers components, including the original engine and transaxle.

By early 2013, the Long Nose Alloy passed to Jeffrey Mamorsky of New York, who drove the GTB in the Copperstate 1000 in April. The Ferrari was displayed two months later at the Greenwich Concours d’Elegance by dealer Nick Soprano, at which point it had been fitted with 15″ outside-laced Borrani wire wheels (similar to the ones used on the factory competizione examples).

In 2014, the 275 was acquired by the consignor, a Ferrari collector who had already owned a 275 GTB but was seeking a truly special example for his next car. Thrilled to encounter a rare alloy-bodied long nose, the consignor commissioned a full restoration in September 2014 by the well-regarded Bruce Canepa and his team in Scotts Valley, California.

Marque expert Dyke Ridgley was extensively consulted to ensure utmost correctness while the car was comprehensively restored. The alloy body was stripped of its paint and refinished in the correct original factory color of Blu Notte, while the interior was reupholstered in proper Rosso leather, and gray carpets were sourced from HVL in the Netherlands. All mechanical components were completely rebuilt, including the original matching-numbers engine, and a great deal of attention was given to proper fit and alignment of panels and components.

Completed by August 2015, the restoration debuted to stunning effect at the FCA Meet held in conjunction with Monterey Car Week, as the GTB won both the Platinum Award and the Coppa Bella Macchina. In May 2016, the berlinetta won another Platinum Award at the Concorso Ferrari in Pasadena, California, and three months later it was displayed at the Pebble Beach Concours d’Elegance®. At the end of the year, the 275 was featured in the December 2016 issue of Octane magazine. The GTB’s illustrious show campaign came to a close after it won the Ferrari Classiche Cup for the finest certified Ferrari at the Cavallino Classic in January 2017.

The consignor not only commissioned the exacting, award-winning restoration of 08011, but also had the GTB’s narrative documented in a premium monograph by respected automotive author Ken Gross in 2016. The exquisite 168-page folio-size, coffee table book from Assouline Publishing is full of quality photographs of 08011 at various stages in its life, and includes an in-depth description of the restoration by Bruce Canepa, as well as numerous large-format images.

Accompanied by a complete set of tools and owner’s manuals, and copies of the 2016 monograph, 08011 is further documented with factory build sheets, a history report by Marcel Massini, and the Ferrari Classiche Red Book. Particularly desirable as one of 77 lightweight alloy-bodied examples (of which just 33 were optioned with six carburetors), and the only 275 GTB originally finished in this elegant color combination, the berlinetta presents exquisitely today. Ideal for further exhibition at club events or marque celebrations, this exceptional 275 GTB Long Nose Alloy warrants the consideration of Ferrari enthusiasts worldwide.