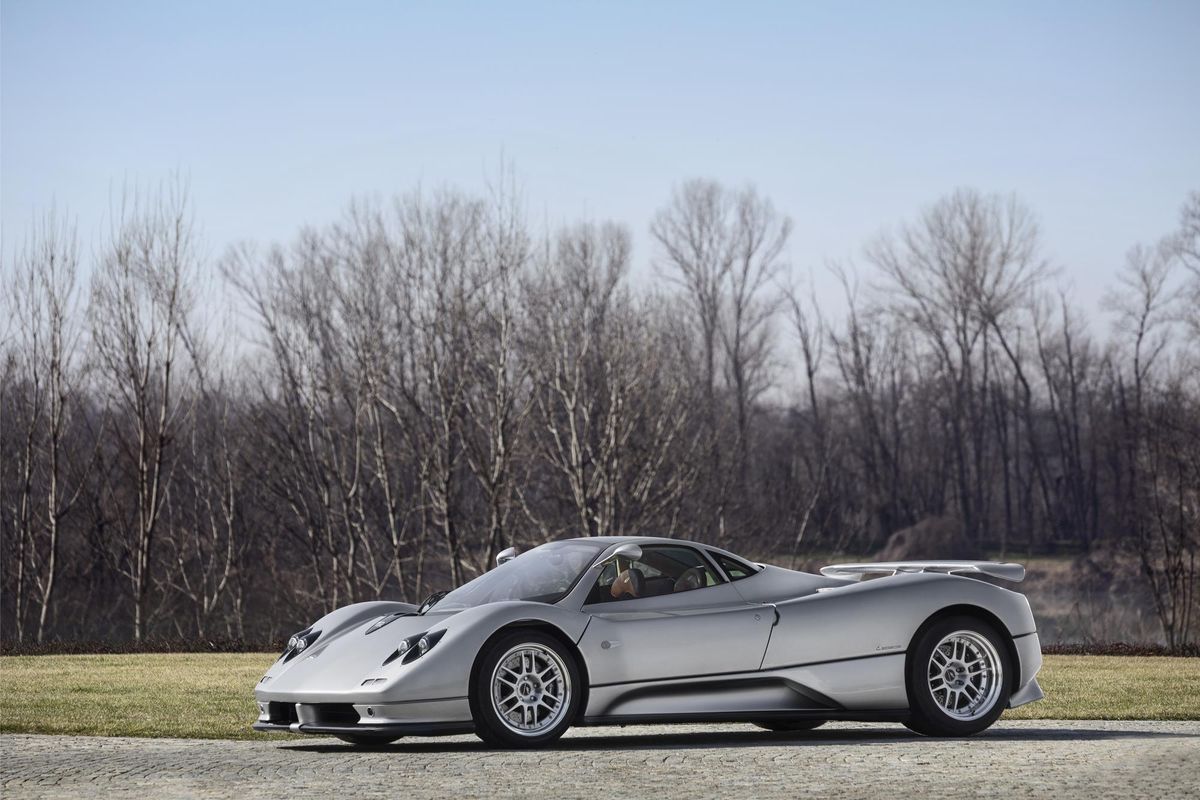 Less than 150 examples built in last 20 years
All powered by hand-built, mid-mounted Mercedes-AMG V12 ranging in size from 6 to 7.3 Litres
Rinascimento program enables owners to restore their Zonda models to the original specification with factory certification
Power ranging from 444 bhp to 789 bhp

First launched 20 years to great acclaim at the 1999 Geneva Motor Show, Pagani Automobili S.p.A. was a new name on the exotica scene with an amazing debut model; the breath-taking Zonda hypercar. The Zonda was originally to be called ‘Fangio F1’ after Formula One Champion, Juan Manuel Fangio, who assisted with the car’s early development, however, following his death in 1995, it was renamed Zonda, the name given to the hot air current that runs above Argentina.

From the very first 1999 Zonda C12 to the final incarnation of the Zonda – the £15million Barchetta – less than 150 examples of the model have been built over the last 20 years, split over a dozen or more different derivatives. All have been powered by a mid-mounted V12 engine, handmade by AMG and ranging in size from 6-litres to 7.3-litres, with power ranging from 444 bhp to a thumping 789 bhp enabling that particular model to achieve a top speed of 221 mph (355 km/h) maximum speed. A number of Zondas have now gone through bespoke upgrades to the bodywork and power trains by the Modena-based Pagani works creating a new generation of Zonda.

On display at this year’s Salon Privé will be the following models:

Zonda C12 (2000): The car that launched the company and Horacio Pagani’s first production supercar. It was an absolute game-changer with its distinctive styling and hand-built Mercedes-AMG 6 Litre V12 engine which then produced 444 bhp, enough to propel the C12 to 60 mph in 4 seconds – quite an achievement back in 1999. The model on display has been through the full Rinascimento

Zonda F Roadster (2005): The Zonda F (F for Fangio) on display is one of just 25 Roadster examples built. The Zonda F was a substantially re-engineered Zonda, using the hand-crafted 7.3-litre Mercedes-AMG V12, developing 641 bhp. Announced at the 2005 Geneva Motor Show in coupe form (the F Roadster following in 2006), the Zonda F was equipped with extra headlights and different fog lights at the sides, plus new bodywork (revised front end, new rear spoiler and more aerodynamic vents all around) that improved the car's aerodynamics, as well as different side mirrors. Further enhancements centered on optional carbon/ceramic brakes (measuring 380 mm) and a redesigned "Z preg" weave in the all-carbon fibre crash structure to improve rigidity and reduce weight.

Zonda Cinque Roadster (2009): As its name suggests, Pagani built just five examples of the Zonda Cinque Roadster which was a 669 bhp road-legal version of the track-only Zonda R. The Zonda Cinque was developed at the request of the Pagani dealer in Hong Kong, with the model intended to be the last iteration of the Zonda. The differences over other Zonda variants were a new three-mode six-speed sequential gearbox, resulting in shifts taking less than 100 milliseconds, dropping the 0–100 km/h (62 mph) acceleration time down to just 3.4 seconds. The Cinque also had a revised form of carbon fibre called "carbo-titanium" which incorporated titanium in the weave to increase strength and rigidity, mated to magnesium and titanium suspension components. It also featured revised bodywork, included a longer front splitter, new side skirts, rear diffuser, bumper canards and a flatter underside, as well as a roof-mounted air intake scoop, enabled the Cinque to generate 750 kg (1,653 lb) of down-force at 355 km/h (221 mph) and 1.45 G of cornering force.

Zonda Tricolore (2010): Just three Tricolore models were built making it one of the rarest of them all. Originally conceived as a one-off, Horacio Pagani decided to make three as a tribute to the Frecce Tricoloi, Italy's aerobatic team answer to the British Red Arrows. The Tricolore carried much of the body from the Zonda Cinque, the model being unpainted, except for a clear blue lacquer, and red, white, and green stripes from the nose along the top of the car's surface. Unique to this car was a small wing placed behind the cockpit which reflected the tail wing of Frecce Tricolori's Aermacchi MB-339 stunt aircraft. The three Tricolores were priced at £1.2 million when new, but are now worth considerably more, as are all Pagani Zondas.

Zonda 760 Oliver Edition (2016): An exclusive one-off edition of the Pagani Zonda, the unique 760 ‘Oliver’ model was built in 2016 for one of Pagani’s biggest collectors and was based on the 760 RS model. Unlike other special edition Zondas, this 760 has a uniquely designed rear spoiler and was engineered by one of the world GT champions to generate the maximum downforce to give the ultimate grip on the circuit. The car was tested by the Toyota factory driver and GT500 champion Akira Iida on Fuji Speedway during the Pagani Raduno in Japan, with Mr. Iida commenting that the Zonda Oliver Evolution was the best handling and closest to the Zonda Evolution R road car he had ever driven.

Commenting on the incredible display, Salon Privé Co-Founder & Sales Director David Bagley said “Salon Privé and Pagani Automobili go back a long way. We have welcomed Horacio and his team as well as many owners from the UK and abroad to countless editions of the event – I don’t think I can recall an edition where there wasn’t at least one Pagani on display. In just 20 years, Horacio has created not only an icon but also a benchmark in design, engineering and strategic partnerships and it’s a testimony to Pagani Automobili that many Zonda owners choose not to sell their beloved cars, but instead send them back to the factory to either restore their cars to their original glory through the Rinascimento program or have a unique bespoke upgrade through their dedicated team. Years ago, I recall a conversation with Horacio’s then assistant, who referred to the Zonda as a piece of art and she wasn’t wrong. To this day, the design and detail found in a Pagani is beyond exceptional.”

Commenting on behalf of Pagani UK, Christine Clarkin said, “2019 is a momentous year for Pagani as it marks the 20th anniversary of when Horacio Pagani’s dream came alive with the unveiling of the iconic Zonda in Geneva.  As the Dealer Principal for Pagani UK I am delighted to bring five spectacular examples of Zonda to the lawns of Salon Privé and to continue our year-long celebrations of this achievement at Blenheim Palace.  Pagani UK are proud to be the only official dealer for Pagani Automobili since 2014 and have the loyalty of our Pagani owners to support this fabulous event year after year.”

Now in its 14th year, Salon Privé is a must-attend event for any car enthusiast or aficionado. Having been invited into the Peninsula Classics Best of the Best Award, the Concours is now recognised by the experts as one of the top events in the world alongside Pebble Beach, Villa d’Este and Amelia Island to name a few. It is an automotive Garden Party held within the grounds of ‘Britain’s Greatest Palace’, Blenheim Palace and firmly established as the UK’s most exclusive automotive Garden Party.

Tickets can be purchased via the website www.salonpriveconcours.com or by calling the Ticket Hotline: 0808 100 2205.