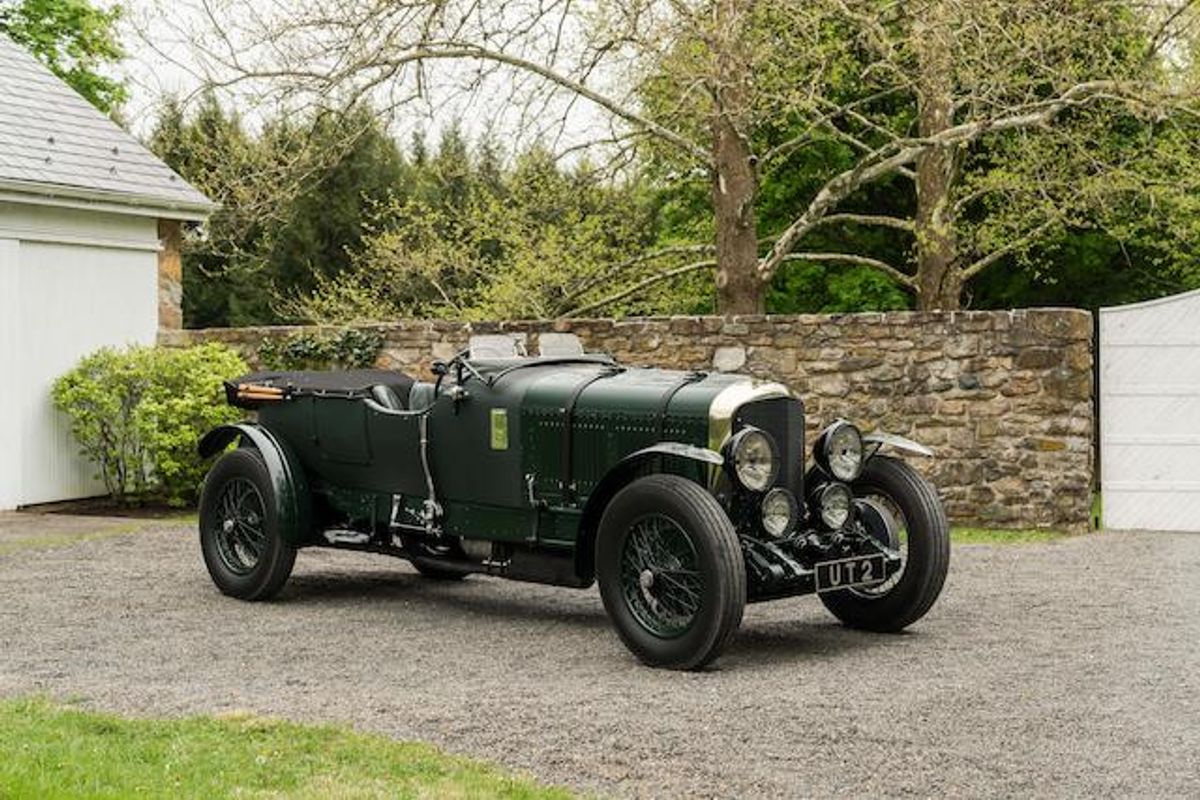 Walter Owen Bentley established Bentley Motors in 1919 in the North London suburb of Cricklewood, though deliveries did not begin until 1921. The first model, a 3-liter car, was powered by a four-cylinder, single overhead camshaft engine with four valves per cylinder. It was a mechanical theme perpetuated in the greatly refined six-cylinder 6½-Liter model of 1926. The need for a larger car had resulted from Bentley's customers specifying bodies of a size not envisaged when the 3-Liter was conceived.

W.O. saw a great deal of sporting potential in the 6 1/2 model. So in late 1928 the Speed Six was announced, and the first chassis delivered in 1929. The changes to increase power and create a sports car, was the fitment of dual S.U. carburetors, and square shouldered radiator wearing a green badge. In Speed Six form it proved admirably suited to competition: in 1929 Barnato/Birkin's Speed Six won the Le Mans 24 Hour Race ahead of a trio of 4½-Liter Bentleys and Barnato/Kidston repeated the feat in the following year's Grand Prix d'Endurance at the Sarthe circuit ahead of similarly-mounted Clement/Watney.

The 6½-Liter was produced for four years, during which time 544 chassis were completed, 182 of these to Speed Six specification. But the survival rate has not been good, and by the late 1990s only 185 of all types could be accounted for. As noted by Jonnie Green in 50 years of the Marque "The Speed Six was W.O.'s favorite among his illustrious machines, can be readily understood by anyone who has driven any distance to the accompaniment of the gentle roar and almost turbine-like never ending surge of power from beneath that long slim bonnet"

The car was dispatched to the prestigious coach builder Gurney Nutting. In the original factory records, it is listed as Weymann saloon. Unfortunately, no known photos of SB2754 as new survive. The agent for the car was none other than H.M. Bentley and Partners. This particular agency was set up by W.O.'s brother, H.M., and operated out of Pollen house, on Cork Street. The car was returned to Bentley Motors for its final test on 14 of November 1929. The car's five-year guarantee was issued on 15th November.

SB2754 was a custom order by its first owner Mr. William Lindsay Everard. It is of note that Mr. Everard also owned a 4 1/2 saloon registration UT1, and had UT2 assigned to this car to match. Mr. Everard kept SB2754 for quite some time until April of 1936.

The car likely found a new owner as it was re-registered. The Leicestershire records note a transfer to Leicester City Borough Council, this was dated on the 14, October 1937. The next change is dated on the 25th of July 1941, when the registration was transferred to Nottingham City Borough Council. The first mention of the car in Bentley Drivers Club Records appears in 1947. At this time, it was owed by Mr. William W. Cope in Nottingham. The next change of ownership was in 1949 when the car was acquired by Lachland McPherson, who retained the car until 1950 when the car was sold to E.N. David Pitts.

In 1951 the car was advertised by Performance Cars Ltd, in Motor Sport in March 1951. At this time the car was wearing a rather wide-open tourer body with cycle fenders. It is listed as ex-Davidge Pitts, and as a very fast, above average car. Currently, the ad serves as the earliest known image of SB2754.

A letter from a Mr. Mark Joesland in the Bentley Drivers Club review No. 224 states that he was offered the car in 1951 when he was 23 for only 120 pounds. He also stated that car was offered with a certificate that it had lapped Brooklands at over 100mph. If this is indeed true then it is likely that the open body fitted in this photograph was fitted before the war, as it would have had a difficult time achieving this with its original body and gearing.

In 1973 the car was in the United States owned by Mr. L.D. Hopeman. Mr. Hopeman retained the car until the mid-1980s. it was at this time that the car was purchased by Dr. Fred Simeone. According to Dr. Simeone it was an unfinished restoration project. Dr. Simeone hired the services of David George to complete the car to its current form. Shortly after its completion, the car was traded to Dr. Simeone's close friend Virgil Millett.

The completed restoration by David George was to a very high standard. The bodywork is very high quality and even fitted with Vanden Plas coach builder plates in the door sills. It was also fitted with quad Andre tele control dampeners. A very nice polished metal dashboard with large racing style tachometer and speedometer were fitted. To finish off the car's overall racing look, a dual Brooklands style fishtail exhaust was installed, as fitted to "Old Number One" for the 1929 Double Twelve race at Brooklands.

After taking delivery of the car, Virgil Millett had the car taken to Steve Babinski for further restoration work. This included a full rebuild of the engine. After the car was completed, according to Mr. Babinski, the car was driven to that year's RROC meet and then back to the Millett family farm.

After Virgil Millett's passing the car was carefully put into static storage. Earlier this year, the car was removed from storage and put through and extensive recommissioning by a Vintage Bentley specialist. This service has included: valve clearances, checking over the chassis, gearbox inspection, and new Excelsior Tires were fitted. It was at this time that all numbers on the car were inspected and it was confirmed that the car retained its original matching numbers, engine, gearbox, and axles. The car was also document by noted Bentley Historian Clare Hay.

Today the car presents very well. The engine is very fresh as it is believed that the rebuild was performed less the 600 miles ago, and it has excellent oil pressure. At the time of cataloguing, the car was taken on an enjoyable test drive and performed beautifully. The engine pulls well, and the gearbox is lovely. Brakes are also very well set up and stop the car with a great deal of confidence. The chassis also handles extremely well, and the steering is very responsive.

The Speed Six Bentley is in many ways the car that cemented the Bentley Legend, winning Le Mans in both 1929 and 1930. They are fantastic touring and rally cars capable of covering long distance in an almost effortless manner. The engine's incredible amount of torque makes them incredibly easy to drive, and the more than ample power allows them to easily cope with modern road conditions. Matching numbers Speed Sixes are rare cars. An excellent car for any number of driver events and tourers, and a great addition to almost any collection.