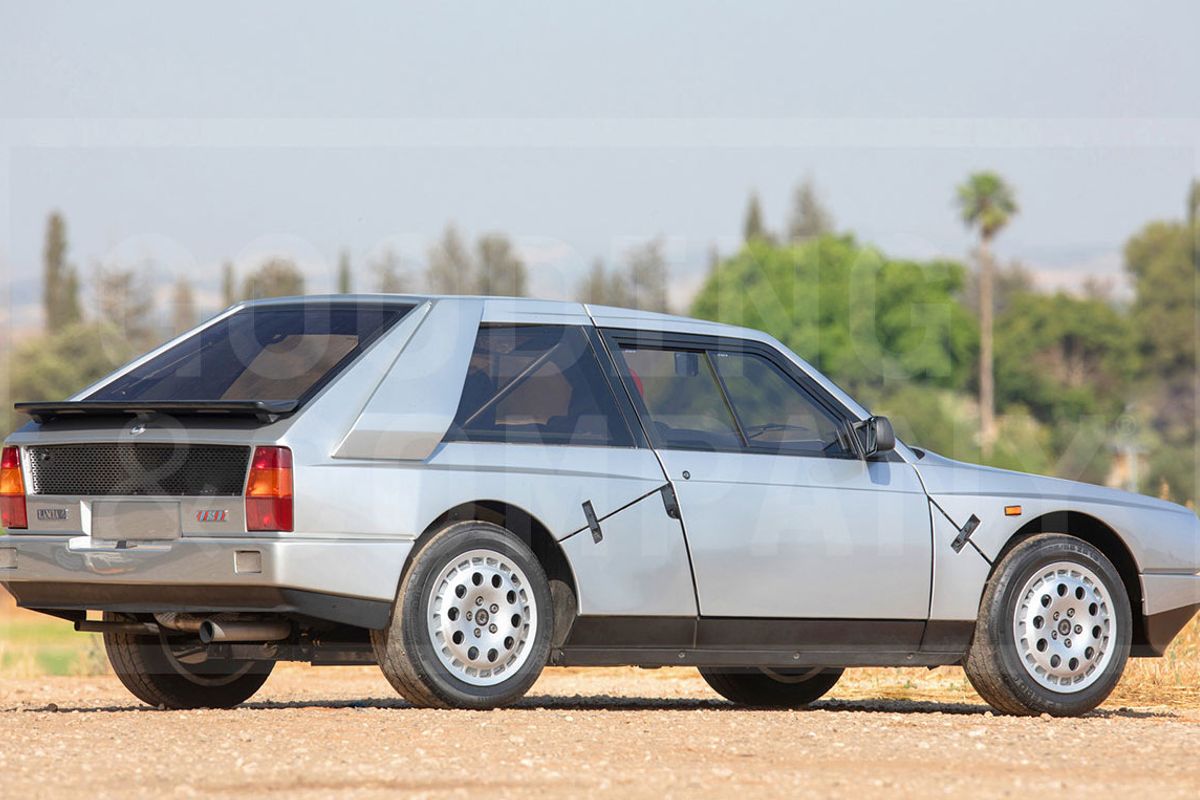 A Group B Car from a Distinguished Private Collection
Chassis: ZLA038AR000000025

Arguably the Finest Original Example Extant with Less than 2,500 Km
One of Four Examples Finished in This Outstanding Color Combination
Never Restored, Remaining in an Incredible State of Preservation
Fitted with Rare Speedline Magnesium Wheels

THIS CAR
From 1982 to 1986, in the FIA Group B World Rally Championship, drivers pushed the limits of human endurance through demanding mountain passes, desert roads, and snow-covered woodland, piloting cars created with spaceage exotic materials, turbo-boosted horsepower, and technical ingenuity. Lancia’s remarkable Delta S4 boasted a tubular space frame, lightweight composite bodywork, and a turbo and supercharged 1.8-liter engine that could deliver over 500 hp and propel the car from 0–60 in about two seconds.

Completed in 1985, this example is one of only six S4 Stradales painted in silver metallic, four of which were fitted with a red Alcantara interior, according to the research of model expert Guido Bortolani of Modena. Imported into the UK in early 1989, it was sold with delivery miles by Lancia-Abarth to the collection of a well-known racing personality, where it would spend the next 16 years. In 2005, Michael Owen Perry, also of the UK, purchased the car with just 690 km on the odometer. By 2008, the car was advertised for sale via Walkers Garage in North Yorkshire displaying just 789 km. The S4 was then acquired by Bortolani after being inspected by the Baldi Brothers, famous Lancia experts. In 2009, the car entered Lucia Ragnoli’s Italian race car collection, and was purchased by the current owner in December 2013 with 978 km.

Now with less than 2,500 km, this example remains one of the finest unrestored S4s in existence, even retaining yellow inspection markings on its suspension. Although it remains in outstanding unrestored condition, routine maintenance has been performed, with a timing belt service done four years and about 1,200 km ago. This S4 is also fitted with the extremely rare Speedline magnesium wheels that were gravel-specification options for the competition cars. The Lancia is also accompanied by its tool set, owner’s and service manuals, and sales brochure, along with an extra set of wheels.

More expensive than a Ferrari F40 when new, the Delta S4 was a technical marvel that honored Lancia’s long tradition of innovation. Even within the world of Group B, the S4 stood out, pushing the boundaries of performance and technological achievement. Today, these examples are among the most prized Group B cars. Since many encountered hard usage early in their lifetimes, finding a well-preserved S4 such as this is a true rarity. The consignor searched the globe for years, and this car was the result of his efforts. With its low mileage, highly original condition, rare specification, and original accessories, this example demands the attention of anyone looking for a world-class piece of motor sport history.