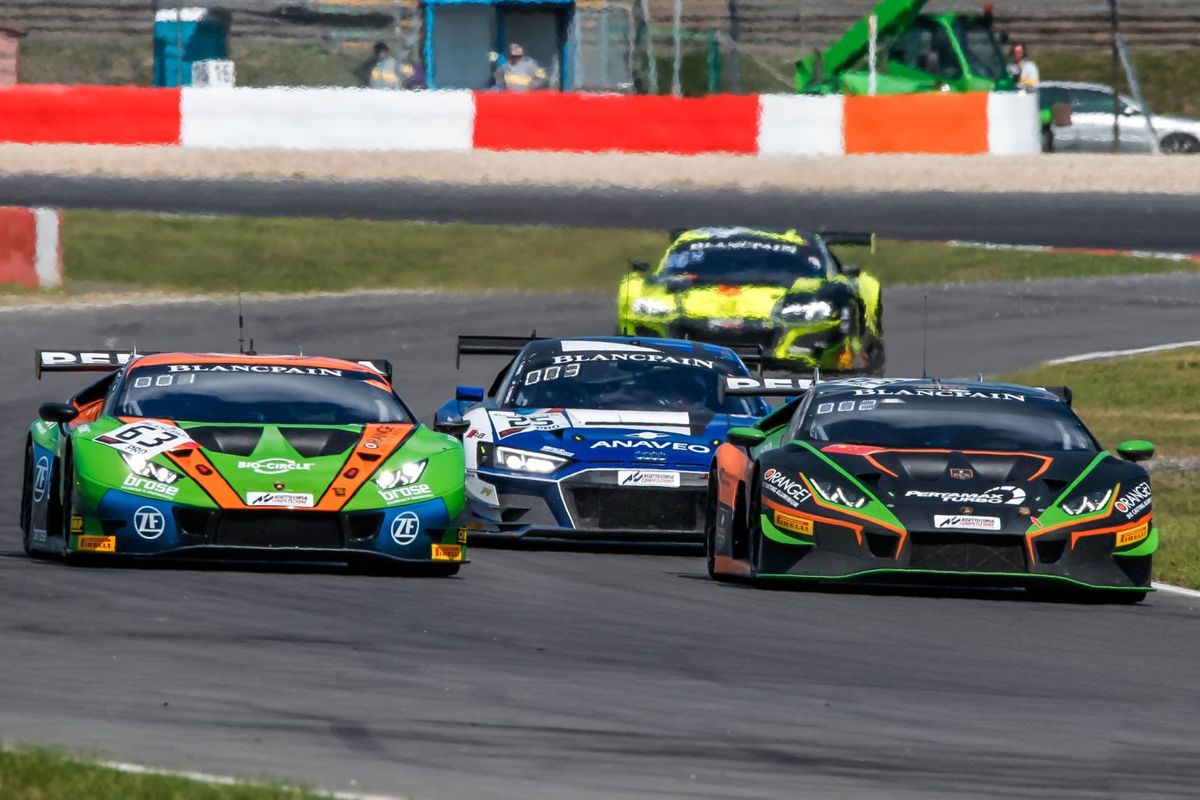 Andrea Caldarelli and Marco Mapelli won a thrilling contest at the Nürburgring to seize the advantage in the Blancpain GT World Challenge Europe title battle.

The weekend's opening 60-minute run ultimately came down to a fight between two Lamborghinis: the #563 Orange1 FFF Racing machine of Caldarelli and Mapelli and the #63 Grasser Racing entry driven by Mirko Bortolotti and Christian Engelhart.

The opening stint was a relatively calm affair and only hinted at what was to come during the second 30 minutes. Bortolotti led away from pole and was followed by the #4 Mercedes-AMG of Luca Stolz, who entered the race as championship leader along with Black Falcon teammate Maro Engel. The fast-starting Simon Gachet (#25 Sainteloc Racing Audi) challenged Stolz for second during the opening sequence of corners, but the German driver prevailed and settled into a rhythm close behind Bortolotti.

As the stint developed Mattia Drudi moved into third, the Silver Cup racer once again impressing aboard his #56 Attempto Racing Audi. He overhauled Gachet, who also slipped behind Kelvin van der Linde (#66 Attempto Racing Audi) and the #563 Lamborghini of Mapelli during the opening 30 minutes. Van der Linde provided the main entertainment during the opening 30 minutes, scything past the sister machine of Drudi and into third spot as the pit stop window approached.

The leading cars stopped early, with Bortolotti, Stolz, Van der Linde and Mapelli all diving in after 26 minutes. The Black Falcon crew would come off worst from this exchange, as Engel was released into the path of the #10 Belgian Audi Club Team WRT machine. The two cars made contact in the fast lane, immediately drawing the attention of the event’s stewards.

When the stops were complete Engelhart led from Engel and Caldarelli, but the Black Falcon entry was soon hit with a drive-through for its unsafe release. Once the German had served his penalty the race became a straight fight between the two Lamborghini drivers.

Caldarelli was almost immediately able to close up to the rear of Engelhart, but the Grasser Racing driver remained cool under pressure and positioned his car perfectly at each corner. Despite his pace, Caldarelli was unable to get alongside the German. What's more, as the leaders continued to slow one another down, Christopher Haase moved into contention in third, having taken over from Gachet aboard the #25 Sainteloc Audi.

The race rapidly became a three-way battle. But, while this appeared to favour Englehart in his efforts to build a gap at the front, it would ultimately play into Caldarelli's hands. With 12 minutes left on the clock the Italian driver got an excellent run on Engelhart exiting the final corner, moving to the outside of the Grasser car on the approach to turn 1. There was minor contact between the two Lamborghinis, which caused Caldarelli to run deep into the corner and allowed Haase to move into second spot.

What could have been the end of Caldarelli's challenge would turn into his big chance. A few corners later Haase ran wide and Caldarelli went up the inside. This caught Engelhart off guard and, moments later, the FFF car was finally alongside the Grasser machine. It was the chance Caldarelli had waited for and he made it count, going wheel-to-wheel with Engelhart before completing the move.

Now in clean air, Caldarelli was able to establish an advantage at the head of the field. Indeed, the FFF driver built a gap of 9.047s during the final 10 minutes, making his hard-fought win appear comfortable. Engelhart hung on to second, despite intense pressure from Haase and the Belgian Audi Club Team WRT machines of Christopher Mies and Dries Vanthoor.

Sixth spot overall went to the #56 Attempto Audi, which took a well-deserved Silver Cup win thanks to Drudi and teammate Milan Dontje. It marks the duo's best result of the season and came after excellent showings from both drivers, who are now just four points shy of the class leaders. The #76 R-Motorsport Aston Martin was seventh, while the #4 Black Falcon machine was able to recover to eighth with Engel at the wheel, scoring crucial championship points in the process.

Pro-Am victory went to the #333 Rinaldi Racing Ferrari, which was untroubled as it led from pole position in the hands of Rinat Salikhov. David Perel took the wheel for the second stint and maintained a comfortable seven-second advantage over the chasing #519 FFF Racing Lamborghini. As such, the gap between the two is now just four points in the FFF crew's favour.

The all-Ferrari Am Cup battle was won by Kessel Racing drivers Stephen Earle and Rory Penttinen. The rival HB Racing machine crossed the line first but was subsequently hit with an eight-second time penalty for causing avoidable contact on the final lap. This promoted the Kessel machine back into the lead, which it had held for much of the contest.

At the top of the Blancpain GT World Challenge Europe drivers' championship, Caldarelli and Mapelli lead for the first time this season with a six-point cushion over Stolz and Engel. Bortolotti and Engelhart are now third, 18 points adrift of the championship lead. Orange1 FFF Racing also assume the advantage in the teams' standings, going clear of AKKA ASP after a difficult opening run for the French outfit.

The weekend will conclude with a second 60-minute race that gets underway tomorrow at 14.30. This will see Stolz and Engel start ahead of their chief championship rivals in fourth, but after winning from P6 today, the FFF Lamborghini crew will hope to once again charge to the front from seventh on the grid.

Andrea Caldarelli, #563 Orange1 FFF Racing Lamborghini: “We started from P6 and everybody knows it’s not easy to overtake at the Nürburgring. When I was second, I tried to attack Christian as much as I could. I tried on the outside at turn 1, but we had a small contact. I was afraid to lose my power steering afterwards, but luckily this was not the case. At the end you just need to be patient and I had an opportunity to take the lead later.”

Christian Engelhart, #63 Grasser Racing Lamborghini: “It was though. We had a lot of tyre degradation and I was struggling. We didn't have the pace, so I tried to defend as best as I could and I think I managed quite well given the pace we had. There was a small contact at turn 1 but it was a misunderstanding. Fortunately, it didn’t compromise a Lamborghini one-two.”

Christopher Haase, #25 Sainteloc Racing Audi: “We had a great pit stop which put us in this position to fight for the podium. We had the car and the pace to win today, but the two Lamborghinis were a little bit faster on the straights and that made it difficult to overtake them. At the end, I had to watch Christopher Mies behind me. I’m happy with P3 and tomorrow is another race.”

Milan Dontje, #56 Attempto Racing Audi: "We just won our first race! We started from P5 overall and Mattia did brilliantly, going up to P3. He did an incredible job. We did a late pit stop and it worked perfectly. It was a really good stop and then I jumped in. I was P5 and I could have held on, maybe not for a really long time but for a while. Then I just held my position and we finished P1 in Silver Cup."

David Perel, #333 Rinaldi Racing Ferrari: "First of all, Rinat did a good job in qualifying to get pole. That really helped us in the race, because track position in Pro-Am is very important. After the pit stop I got in the car and pushed like crazy because Phil Keen was catching me in the FFF Lamborghini. Luckily we managed to pull a gap in the end. I think we were one of the fastest cars on track overall, which is a good feeling. Thank you very much to Rinaldi for the amazing set-up."