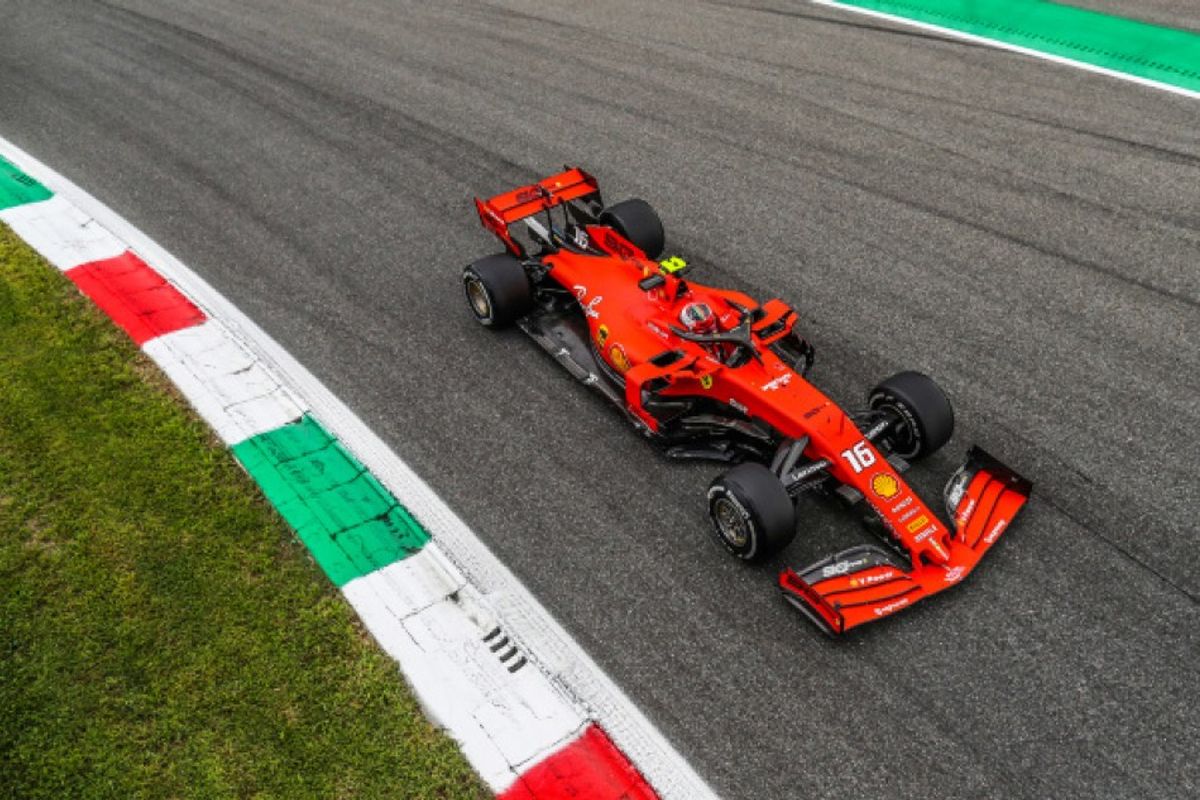 Ferrari's Charles Leclerc is on pole following a farcical end to Q3 at  Monza's Italian Grand Prix. All drivers except Leclerc and Sainz failed to start the final flying lap after bizarre tactics involved waiting to catch a slipstream at high-speed Monza.

Charles Leclerc handed Ferrari top spot on the grid for its home Italian Grand Prix, with the Monegasque drive taking his third career pole position at the end of what he later described as a “messy” qualifying session at Monza. Leclerc took top spot just 0.039s ahead of Mercedes’ Lewis Hamilton with the Briton’s tea-mate Valtteri Bottas third.

The Ferrari star claimed provisional pole with a time of 1:19.307 before a crash involving Alfa Romeo’s Kimi Räikkönen brought out the red flags early in Q1. Then, in the final runs the remaining drivers all sought to seek a laptime-improving tow and amid the backing up and jockeying for position, time ran out and the bulk of drivers failed to cross the line for a final flying lap before the chequered flag was shown.

“It feels unbelievable,” said Leclerc after securing pole for the second race in a row. “I’m happy with the pole but it’s a shame that at the end there was a big mess. I hoped for the last lap but that was enough with what happened for the pole.”

Leclerc laid down an early marker in Q1, taking spot midway through the opening segment with a time of 1:20.126. That put him ahead of Renault’s Nico Hulkenberg, Bottas and Hamilton.

At the back of the field Red Bull Racing’s Max Verstappen, facing grid penalties for taking a new power unit, stayed in the team’s garage for the bulk of the session. But, following a red flag period brought about when Sergio Pérez stopped on track, Verstappen was at the head of a queue of cars seeking to post late lap times. However, midway through his out lap Verstappen reported a loss of power and he limped back to the pits, thus missing out on posting a time.

Eliminated at the end of the session were Haas’ Romain Grosjean in P16 followed by Pérez, and Williams’ George Russell and Robert Kubica.

Q2 was topped by Hamilton. Thanks for purple times in the last two sectors on his final run the championship leader was able to take P1 just under a tenth of Leclerc, with Vettel two tenths further back in third.

Eliminated at the end of the middle segment were Alfa Romeo’s Antonio Giovinazzi, followed by the Haas of Kevin Magnussen, Toro Rosso’s Daniil Kvyat, McLaren’s Lando Norris and the second Toro Rosso of Pierre Gasly.

The final phase of qualifying started with a number of drivers jockeying for position in a stream of cars as all looked to secure a position that would guarantee a slipstream.

It was Leclerc who made the most of whatever opportunities were available in the first run and he topped the order with a time of 1:19.307, three hundredths of a seconds ahead of Hamilton. Further back, though, Räikkonen brought out the red flags when he crashed out at Parabolica and several drivers including Red Bull Racing’s Alex Albon and Racing Point’s Lance Stroll were unable to complete a first run.

It looked like Bottas would be similarly disadvantaged but the Mercedes man was deemed to have crossed the line ahead of the red flag so had his time reinstated. He slotted thus into third place ahead of Vettel, Ricciardo and the last man with a first-run time, McLaren’s Carlos Sainz.

And it proved to be a fortunate decision for Bottas as in the final runs the jostling for track position became almost farcical as drivers slowed and backed up rivals during what amounted to a group out lap.

The result was that only Sainz managed to get across the line before the chequered flag was shown and the session ended in anti-climax as Leclerc backed off and sealed pole position with his first-run time. Hamilton was second ahead of team-mate Bottas, Vettel and the Renault’s of Ricciardo and Hulkenberg. Then came McLaren’s Carlos Sainz, followed by Alex in P8. Racing Point’s Lance Stroll qualified in ninth place ahead of the unfortunate Räikkönen.

Following the session, race control announced that the final lap was being placed under investigation and later Hulkenberg, Sainz and Stroll were summoned to the stewards’ office.